As per the resettlement agreement signed by the central government in January this year, 32,000 Bru migrants living in Tripura since 1997 would be permanently settled in the state. 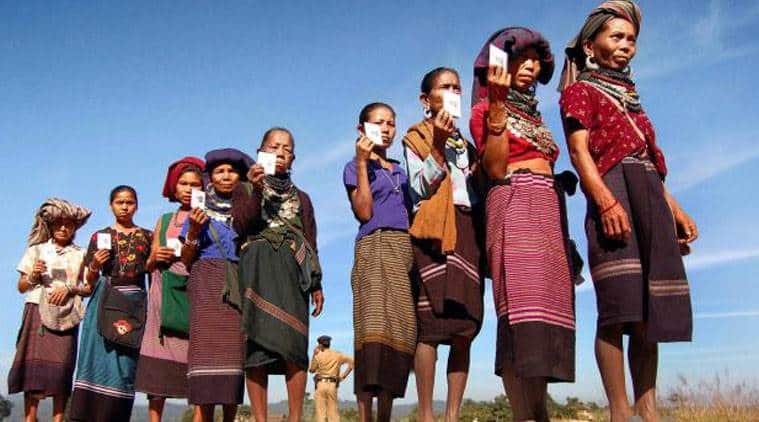 The Bru resettlement process has hit a roadblock with two Mizo and Bengali rights organizations threatening to stage an indefinite ‘bandh’ and move the high court, unless the government permanently drops plans of resettling them at Kanchanpur of North Tripura, where they have been living for the last 23 years.

As per the resettlement agreement signed by the central government in January this year, 32,000 Bru migrants living in Tripura since 1997 would be permanently settled in the state. The government has proposed 12 resettlement locations.

Manu-Chailengta is one such proposed location, where agitators from Mizo Convention and Nagorik Suraksha Mancha protested on Sunday against a team government officials and Bru delegates who arrived for site inspection.

As per the current resettlement plan for Brus, they would be settled in five locations in North Tripura, three locations in Dhalai district, and one site each in West, Sephaijala and Khowai districts.

Speaking to indianexpress.com, Nagorik Suraksha Mancha president Ranjit Nath said over 60 per cent Bru migrants would be settled in Kanchanpur sub-division as per the current resettlement plan and claimed the move would affect locals.

“We are still determined on our stand that Bru migrants have to return to Mizoram. But even with the govt resettlement plan, over 60 percent of them will stay back at Kanchanpur, while there is no word for hundreds of Bengalee and Mizo families who were evicted by Brus since their arrival in Tripura. This can’t go on,” Nath said.

“The government is overtly favouring Bru migrants. We have suspended the movement after getting assurance fr the SDM that no site inspection will be done except CCRF areas until further instruction from the government,” he said.

Reacting to the issue, Kanchanpur Sub-Divisional Magistrate (SDM) Chandni Chandran wrote to Revenue Secretary informing about the protests and sought advise on the next course of action.

“I tried to allay fears of agitators about resettlement and explained them the situation. I also assured that visits to proposed resettlement sites wouldn’t be held now till further instructions arrive from the government,” she said.

The official also said that she hasn’t received any reply from the Revenue Secretary yet. She added that if the government plan continues as planned, she will go ahead with site visits.

“Nagarok Suraksha Mancha and Mizo Convention supporters are trying to politicalize the issue. We have lived peacefully with all communities for over two decades. These protests against us are unfortunate and anti human-rights, since the move was initiated by the government, not us”, he said.

In January this year, Government of India signed a quadrupartite agreement to resolve  the 23-year old Bru displacement crisis in Tripura.

The central government has declared a Rs. 600 crore package for resettling these migrants in clusters in the state.

A previous agreement, signed by the same stakeholders in 2018, mandated that the migrants would be repatriated to Mizoram, where they came from. However, the deal was rejected by a majority of the migrants who feared ethnic clashes after their return.

Over 37 thousand Brus fled Mamit, Kolasib and Lunglei districts of Mizoram in 1997 following ethnic clashes. Nearly 5,000 of them returned in nine phases of repatriation though many sought shelter in North Tripura in 2009.

Trains to be cancelled for modernisation works

Goa chief minister Manohar Parrikar dies at his Panaji home. He was 63