Standing near the logs of wood, relatives of those about to be cremated try to remain calm in the extreme heat emanating from the burning pyres. The pungent fumes singe everyone’s eyes. 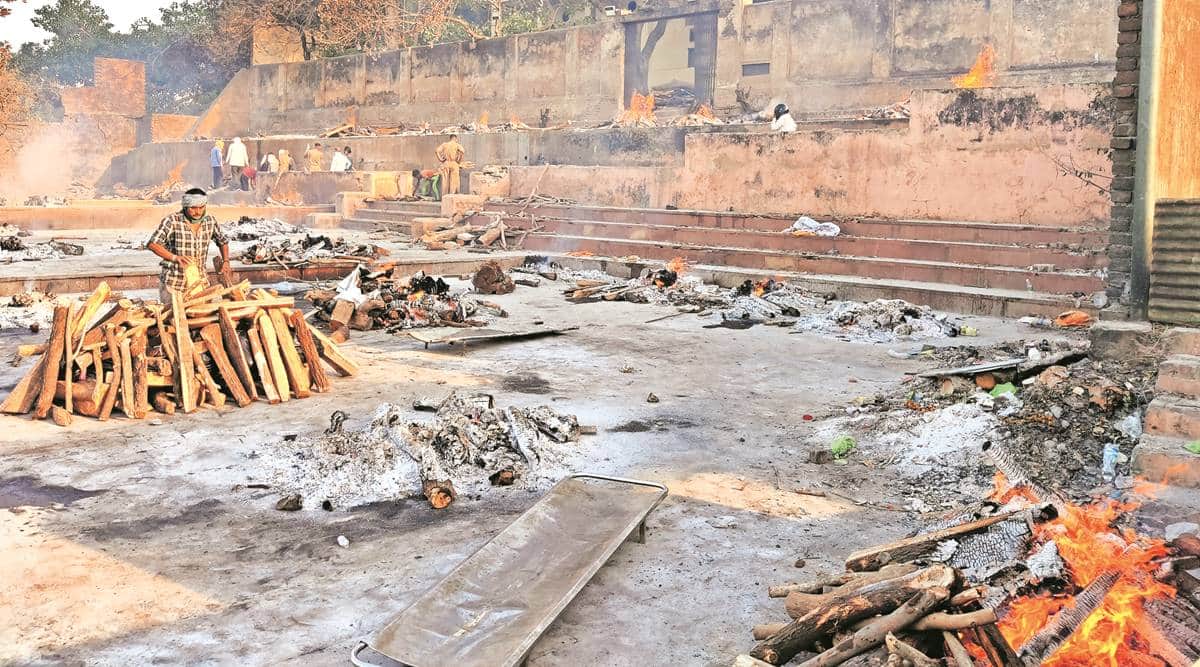 Sitting in a small cabin, Kamruddin, the supervisor of the Bhairav Ghat crematorium in Kanpur, keeps a count of people coming to cremate family members or friends who have died of Covid-19.

It is Monday evening and outside the cabin, on the other side of a small window, grieving family members wait to receive a token to cremate a loved one, or for a certificate of cremation. Everyone waiting has lost someone beloved in the second wave of the pandemic. While social distancing norms are not being followed in the chaos in hospitals and outside oxygen suppliers’ offices, the queue here is calm and following the rules. Around 5.45 pm, Kamruddin confirms he just handed over his 66th token on the day.

“So far we have received 66 bodies today, and on average we have been getting around 70 bodies a day for the last 7-10 days. On some days, the maximum number goes to 80 or 90 bodies. Just around one-fourth of the bodies are cremated using the electric crematorium, and the rest are using pyre wood. As of now, out of these 66, we have cremated around 40,” he adds.

About 100 metres from the spot, two JCB machines ferry pieces of wood from stacks placed in a corner to the main gate of a cremation section that has been set up exclusively for those who died of Covid. At the crematorium site, The Indian Express counted 27 pyres either burning or with embers, 13 doused pyres and at least four about to be set on fire. However, it could not be confirmed if all the bodies were from Kanpur or if there were some from other neighbouring districts.

Standing near the logs of wood, relatives of those about to be cremated try to remain calm in the extreme heat emanating from the burning pyres. The pungent fumes singe everyone’s eyes.

“The situation is horrible. Bodies are everywhere,” says a man in a PPE kit. He is a healthcare worker and is there to cremate a family member.

According to the state Covid bulletin on Monday, Kanpur reported 28 deaths – the highest toll in the state in the preceding 24 hours. While the fatalities dropped to 15 as per the Tuesday bulletin, the district now officially has 17,914 active cases and 1,105 Covid-related deaths, of which 117 fatalities occurred in the last week. The fatality count in Kanpur is second only to Lucknow, which has reported 1,713 deaths since March 2020. Of those deaths, 169 occurred in the past week.