Won't return to House until CM apologises for misconduct of his police force: Tejashwi 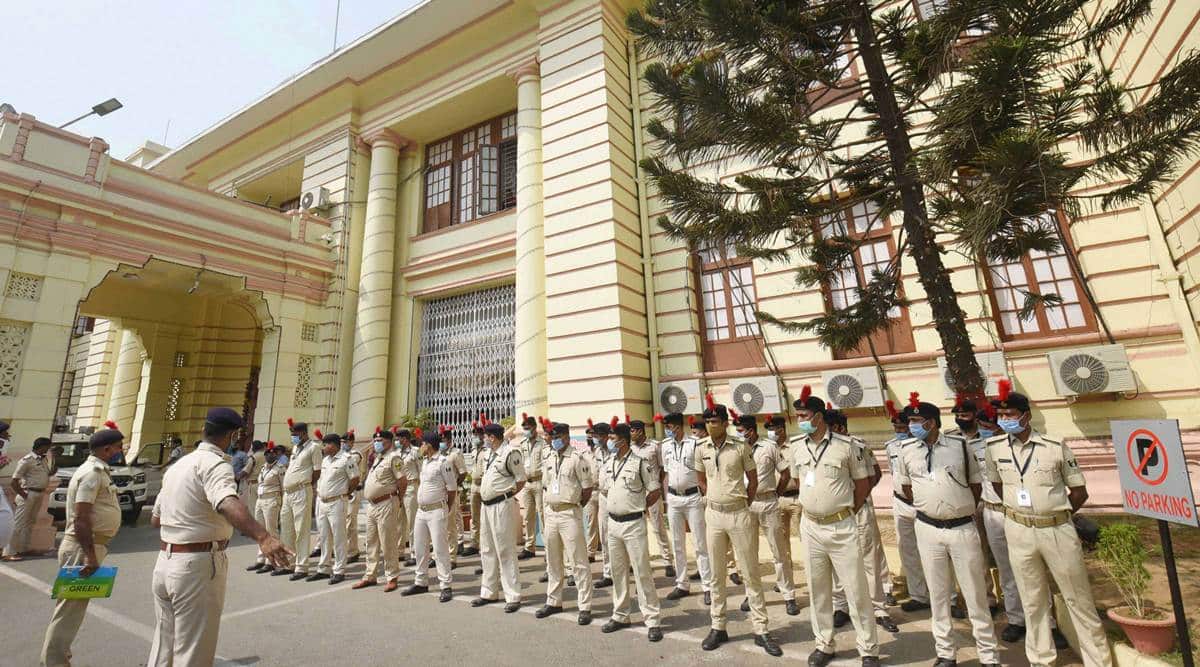 THE BIHAR Legislative Council passed the Bihar Special Armed Police Bill, 2021, even as the RJD-led Opposition boycotted proceedings in both Houses of the state legislature on Wednesday, protesting against the manner in which its MLAs were evicted from the Assembly a day before. The RJD demanded an apology from Chief Minister Nitish Kumar for the forceful eviction of the opposition MLAs.

The Bill was passed in the Assembly Tuesday evening despite the Opposition’s attempts to stall its presentation. Although the RJD still had an opportunity to oppose the Bill in the Council, where it has six members, and demand a debate or suggest amendments, it boycotted the proceedings.

Opposition legislators led by Leader of Opposition Tejashwi Prasad Yadav sat on a dharna outside the legislature on Wednesday. They got RJD MLA Bhudeo Choudhary to function as speaker to run mock procceedings in protest against the alleged misbehaviour with at least seven MLAs while they were being marshalled out of the Assembly on Tuesday.

“I am not going to return to the House until Chief Minister Nitish Kumar apologises for misconduct of his police force,” said Tejashwi. He said the passing of the police Bill would pave the way for “police raj, giving it unbridled powers”.

The Opposition also paraded 12 MLAs, seven of whom suffered injuries while they were being marshalled out on Tuesday for protesting against the Bill in the Assembly. Former chief minister and RJD leader Rabri Devi accused the police of misbehaving with the women legislators during the course of being marshalled out.

The women MLAs who were marshalled out included RJD MLAs Anita Devi and Manju Devi, and Congress’s Pratima Kumari. The three MLAs, along with two other women MLAs, had approached the Speaker’s chair after Leader of Opposition Tejashwi returned to the House after staging a protest outside around 4.30 pm on Tuesday.

Tejashwi’s return to the Assembly intensified the Opposition protest against the police Bill, which had till then forced a couple of adjournments. While RJD’s Mohammed Kamran and CPI (ML)’s Mehboob Alam led the Opposition charge, another RJD MLA, Bhai Virendra, tore a copy of the Bill in the presence of acting speaker Prem Kumar. Another RJD MLA, Satyendra Yadav, unsuccessfully tried to snatch a copy of the Bill from Deputy Chief Minister Tarkishore Prasad.

The unruly scenes led to the eviction of the protesting MLAs from the House. However, several of the legislators – including RJD’s Makdumpur MLA Satish Kumar, RJD Ramgarh MLA Sudhakar Singh and Congress’s Karahgar MLA Santosh Mishra – accused the police of manhandling them.

Satish Kumar, who fainted while being marshalled out, said: “It is a case of police excess. We were pushed and pinned to the ground.” His party colleague Sudhakar Singh made similar allegations. In a video that went viral Tuesday evening, Singh is seen being dragged out along with Kumar.

A state Assembly official said: “As the situation was getting out of control, we had to call additional forces, including Rapid Action Force personnel. A total of 12 MLAs were marshalled out. Those who resisted had to be dragged out. But none of them suffered any serious injuries.”

Chief Minister Nitish Kumar said: “The Opposition could have asked for debate and waited for our explanation. I have been a legislator since 1985 and have not seen Opposition behaving like it.”

Assembly Speaker Vijay Kumar Sinha said: “What happened in the House on Tuesday is unfortunate and shows the Opposition’s offensive and irresponsible behaviour. The Leader of Opposition could have shown maturity in dealing with the situation.”

Former minister and ruling JD(U) spokesperson Neeraj Kumar said: “Three states have already passed a similar Bill. We only aim at raising a specialised force to lessen our dependence on central forces.”

Antifa: why America is talking about group that uses violence with ‘fascists’