In a significant moment for the Hindu community in the US, a street outside a renowned and prominent temple in New York has been named the ‘Ganesh Temple Street.

Established in 1977, The Hindu Temple Society of North America Sri Maha Vallabha Ganapati Devasthanam, popularly known as the Ganesh temple, is regarded as the first and oldest Hindu temple in North America.

The Hindu temple is situated in Flushing, Queens county.

The street outside the temple is named Bowne Street, after leading American pioneer of religious freedom and anti-slavery movement John Bowne.

In a special ceremony Saturday, the street was co-named the ‘Ganesh Temple Street’ in honour of the iconic Ganesh temple.

The special ceremony, during which the street sign was unveiled, was attended by Consul General of India in New York Randhir Jaiswal, Queens Borough president Donovan Richards, deputy commissioner for trade, investment and innovation in the office of New York City Mayor Eric Adams, Dilip Chauhan and members of the Indian-American community.

Jaiswal, during a special function on Saturday held at the Indian consulate to commemorate Baisakhi, told the gathering that at a “beautiful function” in Queens, the Bowne Street just outside the Ganesh Temple was co-named the Ganesh Temple Street.

He said the co-naming event was not just a celebration but it showed the “kind of hard work that has gone into reaching this milestone, years after years, decades after decades. It speaks so well of the Indian-American community, for all that you have done not just for yourself but bringing joy and happiness to people’s lives around you.” 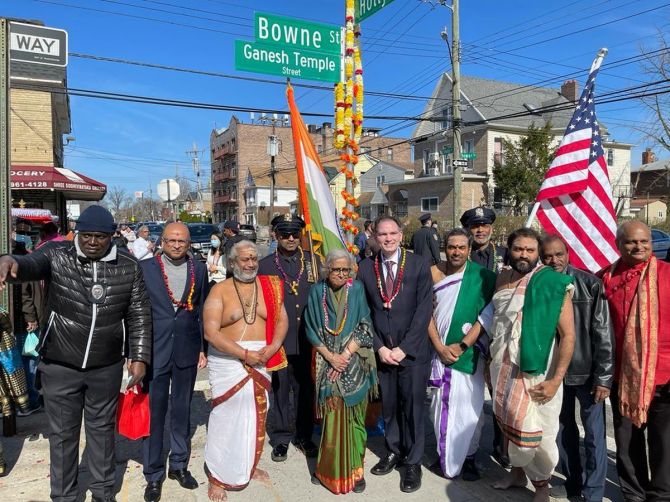 Richards, who shared a video on Twitter of the unveiling of the street sign in presence of priests and a large cheering crowd, tweeted that “Bowne Street in #Flushing is now also Ganesh Temple Street! What a day to celebrate. Congratulations to Dr Uma Mysorekar and everyone at the Hindu Temple Society of North America for all they do to spiritually support our families and uplift the collective soul of #Queens.”

Mysorekar is a leading obstetrician and gynecologist and president of the Hindu Temple Society of North America Board of Trustees.

In December last year, a committee chaired by councilman Peter Koo, under the New York City Council had approved the co-naming of Bowne Street as “Ganesh Temple Street”, the temple had said in a social media post and had thanked all the devotees, management, board members, elected officials and everyone for their continued support.

Vemulawada temple overflows with devotees ahead of Medaram Jatara

Rishabh Pant will be an all-time great: Sourav Ganguly

Class 10, 12 students in Maharashtra to get bonus marks for NCC, Scouts events