‘We particularly want Bajrang Bali because he is linked to my own Dalit caste,’ Mayawati said. 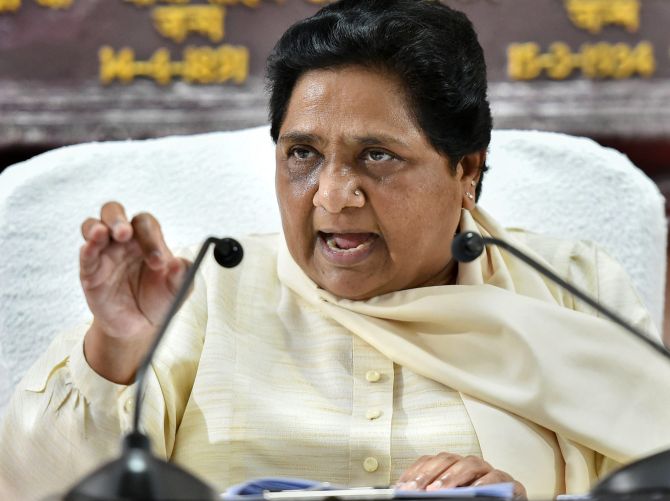 Giving her own twist to a recent remark by Uttar Pradesh Chief Minister Yogi Adityanath, Bahujan Samaj Party chief Mayawati Saturday said her party wanted both Ali and Bajrang Bali — particularly Bajrang Bali as the deity is ‘linked with my own Dalit caste’.

Addressing a rally in Badaun, Mayawati recalled Adityanath’s comment on Tuesday in which he referred to her earlier appeal to Muslims to vote for the opposition alliance in Uttar Pradesh.

“In this connection, I want to tell him (Adityanath) that both Ali and Bajrang Bali are ours…. So we want both Ali as well as Bajrang Bali,” she said.

Ali is a revered figure in Islam and Lord Hanuman is often called Bajrang Bali. Both Mayawati and Adityanath were served notices by the Election Commission over their remarks.

“We particularly want Bajrang Bali because he is linked to my own Dalit caste,” Mayawati said.

The BSP chief was apparently referring to Adityanath’s comments last year when he had described Lord Hanuman as a forest dweller and a Dalit.

“I am very thankful to Yogi ji that he has given us an important information about our ancestors. So, it is a very happy moment to note that we have both Ali and Bajrang Bali, and their coming together will give us very good results in these elections,” she said.

“In the Lok Sabha election in Uttar Pradesh, Yogi’s party (BJP) will neither get the votes of Ali nor Bajrang Bali, who is associated with my caste,” she said.

Mayawati was addressing a rally of the BSP-SP-RLD alliance in favour of Samajwadi Party nominee Dharmendra Yadav for the Badaun Lok Sabha seat, where SP chief Akhilesh Yadav was also present.

“In these elections, the NaMo NaMo people are going out of power and the Jai Bhim ones are coming, which is also the need of the country.” NaMo is an acronym for Prime Minister Narendra Modi and Jai Bhim is the slogan used by followers of Dalit icon B R Ambedkar.

The BSP president said Dalits have long left the Congress and also the BJP.

“After Independence, for a long time, both at the Centre and states, there had been Congress governments…. It was the wrong policies and working of the Congress that forced it out of power,” Mayawati said.

Similarly, she said, in the ongoing election, the BJP will be thrown out of power because of its pro-Rashtriya Swayamsevak Sangh, ‘casteist, capitalist, communal and narrow mindset’, besides alleged wrong policies and wrong-doings.

“In these elections, no amount of drama or ‘jumlebaazi‘ (rhetoric) is going to help the BJP. Even the new drama of ‘chowkidari‘ is not going to save them this time,” Mayawati said.

The BSP leader also alleged that Modi had tried to mislead people by resorting to gimmicks even after the announcement of election dates.

Mayawati also alleged that even one-fourth of the ‘achchhe din‘ (goods days) that the BJP promised had not been fulfilled.

No talk of NRC in govt, no detention centres in India, all lies: PM Modi

Govt. to consider including COVID-19 treatment under Aarogyasri: KCR