"The state government has sent a dossier to the centre seeking a total ban on the PFI and we are also doing whatever needs to be done against the outfit", Chief Minister Himanta Biswa Sarma said. Assam Chief Minister Himanta Biswa Sarma on Thursday claimed the Popular Front of India (PFI) was involved in violence during an eviction drive in Darrang district which saw police firing on peasants claiming two lives, including a 12-year old boy, and left over 20 injured, and sought the organisation’s ban by the central government.

Sarma said his government had prepared a dossier on PFI and would be taking action against the outfit in the state.

“The state government has sent a dossier to the centre seeking a total ban on the PFI and we are also doing whatever needs to be done against the outfit”, the Chief Minister said here on the sidelines of a meeting here.

Mangaldoi MP and BJP national secretary Dilip Saikia had earlier on Friday alleged that “third parties, including the PFI” could be involved in an alleged attack on police personnel during the eviction drive but the outfit’s state President Abu Shama Ahmed had denied the allegations saying that it has no cadres in the areas where evictions were carried out and none of its leaders had visited the area.

The Chief Minister claimed there were intelligence reports that six people, including a college lecturer, had collected Rs 28 lakh during the last three months from poor landless families saying that they would convince the government to stall eviction.

“We have the names of six people with intelligence reports that Rs 28 lakh was collected and when they could not prevent the eviction drive, they mobilised those people and created mayhem on that particular day,” Sarma said.

He claimed that using the pretext of providing food to evicted people, PFI had visited the site. “These details have emerged so far and we are sure that when a judicial inquiry begins, more explosive information will emerge”, the chief minister said.

Sarma said that he had called representatives of All Assam Minority Students’ Union (AAMSU) to his office to discuss the eviction drive and then directed them to meet the Darrang administration.

“My message to them was very clear-that if these people were landless, we would give them two acres of land, on condition that they do not possess any land in any other place in the state. (However) most of these people have land and are not landless as a section of the national media has portrayed them to be”, he claimed.

AAMSU President Rejaul Karim Sarkar told reporters on Saturday however said affected people were not given any land or compensation and those evicted are now living in temporary structures without proper drinking water or sanitation facilities.

The chief minister also blamed the media and claimed it had taken sides in the conflict. “The so-called national left-liberal media should stop taking sides. An aberration had occurred when a photographer behaved in an outrageous manner – he has been arrested and an inquiry is being conducted,” he said.

The Chief Minister asserted that he wants to give a “clear message that Assam cannot be cowed down. We have orders from the Gauhati High Court on several occasions to evict people from forests and other encroached areas. You cannot occupy large tracts of forest or land belonging to indigenous people.”

He said that he had offered “two acres of land and also a PMAY house to the landless… I did my job and they should not have attacked the police on that day”.

Among those killed were a 12-year old boy Shaikh Farid who was returning after collecting his Aadhar card from the post office and 28-year old Moinul Haque who in a video that went viral on social media was seen shot dead by the police while a photographer, hired by the district administration to document the situation, was seen kicking, and jumping over his body.

The photographer was later arrested.

The Darrang district administration has so far evicted 800 families since Monday and demolished four ‘illegally’ constructed religious structures at Sipajhar.

The chief minister had visited the place on June 7 and inspected the riverine areas allegedly encroached by “illegal settlers” near Dholpur Shiva temple and directed the district administration to clear the area for the government to start the Goroikhuti community farming project.

Meanwhile, the All India United Democratic Front (AIUDF) on Saturday whose delegation met Assam Governor Jagadish Mukhi, urged the government to ensure that a compensation of Rs 20 lakhs be paid to the next of kin of those killed and Rs 10 lakh to those injured in the firing during the eviction drive.

AIUDF also sought a minimum of six bighas of land for faeming and one bigha for homestead to be given as compensation to each evicted family.

Meanwhile, a Congress delegation, led by Deputy Legislature Party leader Rakibul Hussain, visited the Gauhati Medical College Hospital and inquired about the condition of those injured in the incident and undergoing treatment at the hospital.

Ten per cent quota will help integrate those enjoying reservation and those without it: Vijay Rupani 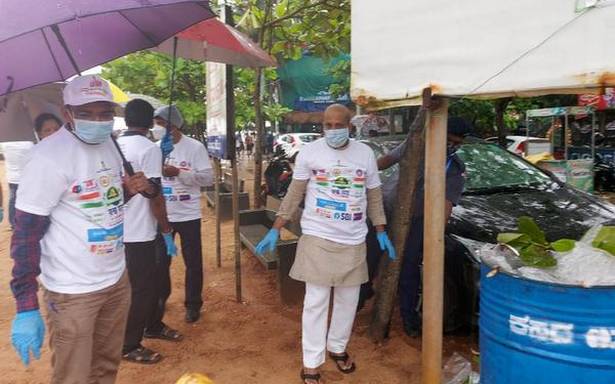