Published by Harper Collins and co-authored by Sanjeev Mathur, the book highlights how the 2005-batch IPS officer leveraged the TV screen to flush out Asaram before arresting him in 2013 within 10 days of receiving a rape complaint from Delhi Police. 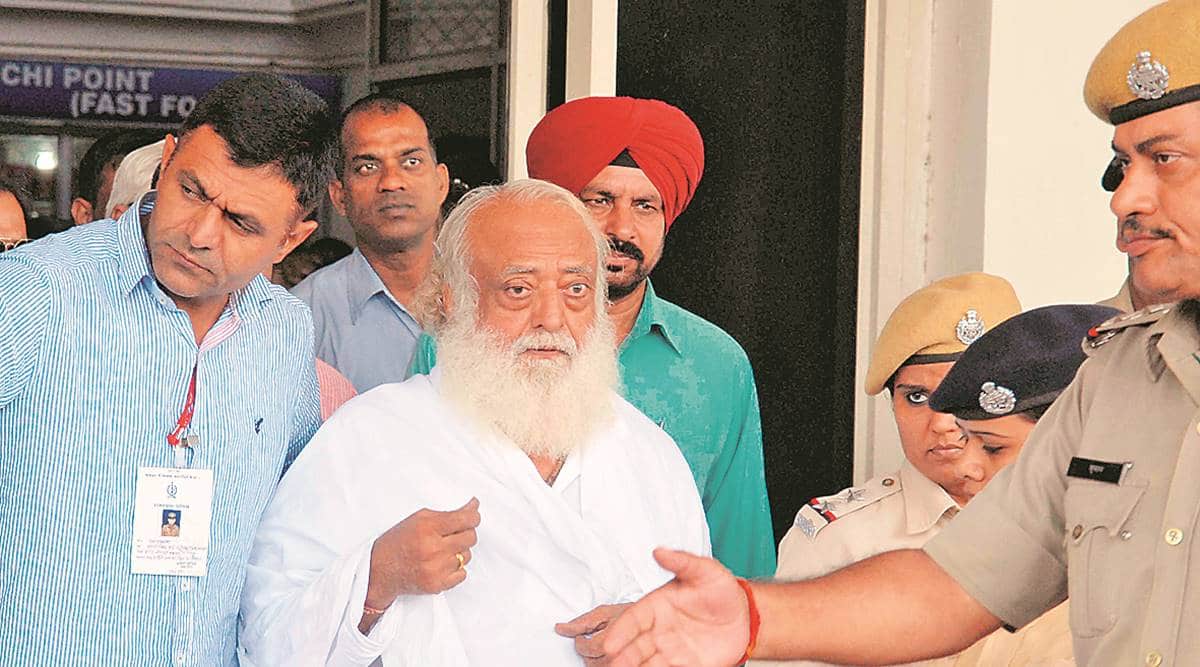 “’Baba, tu yeh bata ki yeh sab kya kar dala tune. Jaldi bata (Baba, tell me why you did all this. Tell me quickly)’, I asked him in a gruff voice. What he said in response astounded me. ‘Galti kar di, galti kar di maine (Committed a mistake, I committed a mistake)’.”

“The Gujarat police…revealed that… they [Asaram’s followers] had planned to kill her [Investigating Officer Chanchal Mishra] by installing an IED and blowing up her vehicle.”

“’Tum aisa nahin kar sakte. Tum ko abhi upar se orders aajayenge ki mujhko arrest nahin kar sakte (You can do nothing of the sort. You will soon receive orders from superiors that you cannot arrest me)’, Asaram tried bluffing…In response, Subhash took out his mobile phone from his trouser pocket and switched it off…”

SELF-STYLED GODMAN Asaram Bapu was arrested seven years ago. But even today, IPS officer Ajay Pal Lamba, who led the police team that August, says he gets threat calls from the rape convict’s followers. So much so, that Lamba’s wife once even stopped sending their daughter to school for a few days.

All that trauma, and all the drama, behind that sensational arrest has now been captured in a book Gunning for the Godman: The True Story Behind Asaram Bapu’s Conviction by Lamba himself. “Ever since they (Asaram’s followers) came to know that a book has been written, the threat calls have increased,” says Lamba, 42, who is now Additional Commissioner of Police, Jaipur.

Parts of the book, which will be released virtually on September 5, read like an OTT thriller, starting with how Lamba chose the best officers, in his team “Tough Twenty”, who went undercover and mingled with Asaram’s followers or excelled at legal angles, interrogation, surveillance and cyber skills.

Lamba writes that he even asked them to keep an eye on each other in case anyone was being affected “or compromised due to political and departmental pressures, influences, threats or monetary offers”.

Published by Harper Collins and co-authored by Sanjeev Mathur, editorial head at The Book Bakers Literary Agency, the book highlights how the 2005-batch IPS officer leveraged the TV screen to flush out Asaram before arresting him in 2013 within 10 days of receiving a rape complaint from Delhi Police.

Lamba, who was DCP (Jodhpur West) at the time, writes that he bluffed at a press conference about dispatching a team to arrest Asaram. A friend, who had watched the telecast, informed that Asaram had turned up at Bhopal airport. Lamba then shared this nugget with the media.

“It was exactly what I had wanted. With the media following the man and recording every movement of his from Bhopal airport onwards, I did not need any kind of surveillance to be put on him from our end. The man was running scared and heading straight towards the net that we had laid out for him with care,” Lamba writes.

Asaram subsequently reached Indore where he was arrested despite intense opposition by his followers.
Lamba says his learning came partly from another sensational case in Tamil Nadu. “At the time when the infamous sandalwood smuggler, Veerappan, was killed by the Tamil Nadu police in an encounter, positive media interactions helped the police to tilt public opinion in its favour,” he writes.

The book details the investigation and the challenges:

“Mad followers of Asaram got together and once even reached my native village, a hamlet called Lambi ki Dhani. Thirty kilometres from the Neema ka Thana subdivision of the Sikar district of Rajasthan, the village is so small that it only consists of twenty families (who)… gheraoed these followers, making it impossible for them to escape. Afterwards, the local police was called in and the miscreants handed over to them.”

“An attempt was made on prosecution witness Rahul Sachan’s life, on 13 February 2015, when he was exiting the court during trial. He survived the attack, but later went missing in November 2015. He has not been found since.”
The book also profiles Asaram, born Asumal Sirumalani, and claims that he allegedly used tea-selling as a garb for bootlegging. According to Lamba, police also allegedly found during investigation that Asaram “had some kind of sex addiction and demanded a new nubile girl every night”.

In April 2018, a Special Court in Jodhpur found Asaram guilty of raping a minor girl and charged him under various IPC sections, Protection of Children from Sexual Offences Act (POCSO) and Juvenile Justice (Care and Protection of Children) Act. He was sentenced to life imprisonment until death and a fine of Rs 1 lakh.

Says Asaram’s advocate Pradeep Choudhary: “I haven’t read the book and only once I read it will I be able to tell what is right and what is wrong…Our appeal is pending in the High Court (the next date of hearing is September 14). Let us get a judgment first.”

Congress leaders should be ‘ashamed’ of Rahul’s comments on Kashmir: Amit Shah