Byju’s, says Anita Kishore, has given the founders of the businesses it has acquired the independence to operate separately and maintain their core culture.
Peerzada Abrar reports. 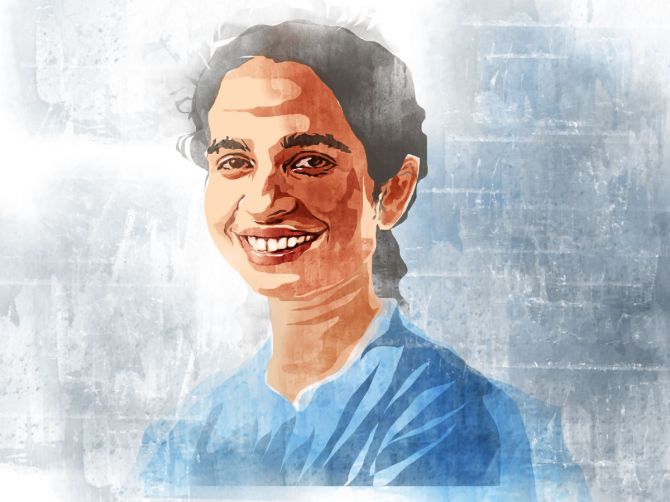 In the audience was also mechanical engineering student Anita Kishore.

“It was brilliant. I really liked the session and the way he approached and thought about math,” says Kishore.

“I went up to him and asked him to take a few more sessions. I told him there is an auditorium and 500 students in our college and I would make sure to fill it up.”

Attending that first session was a turning point in Kishore’s life, who later joined edtech startup Byju’s founded by Raveendran in 2011.

Kishore, 33, quickly rose through the ranks and is now chief strategy officer at Byju’s, which has become the world’s most valuable edtech company with a valuation of $16.5 billion.

She is the main brain behind some of the biggest acquisitions made by Byju’s globally and in the domestic market.

She participates in negotiations to do the acquisition deals, strategic partnerships, and raise large funding rounds along with Raveendran.

“It is not a very large (M&A) team. It is primarily the two (Raveendran and Kishore) of us,” says Kishore, a mechanical engineer who has an MBA from IIM-Ahmedabad.

Prior to Byju’s she worked at Boston Consulting Group and had a brief stint as a summer associate at Lehman Brothers.

“We have clearly seen inorganic opportunities work well and have been able to integrate businesses and the products,” she says.

“While the organic growth continues to be strong, we see inorganic (route) another pillar for us as we expand.”

Byju’s is on an acquisition spree to grow rapidly in India and globally as the coronavirus pandemic has accelerated the adoption of online education.

Students and professionals are looking to upgrade their skills, while schools and offices remain shut.

Byju’s has acquired about 6 companies across India and the US this year and spent over $2 billion over the last 6 months on these acquisitions, according to the sources.

The inorganic route is expected to help the Bengaluru-based Byju’s quickly dominate the edtech market which has witnessed a boom due to the pandemic.

It is helping the firm increase its lead over its competitors such as SoftBank-backed Unacademy, Vedantu, Simplilearn, UpGrad, Amazon Academy, and traditional education institutes to tap the country’s $180 billion education sector that has gone online to adapt to the new reality.

“None of these companies were actually looking at selling. Most of the founders wanted to continue to build,” says Kishore.

“We see these acquisitions more as partnerships or integration. The founders continue to run the business independently.”

The approach for acquisitions is not about having a specific budget or number of targets but assessing complementarity.

One such major acquisition is US-based educational gaming company Osmo.

Byju’s closed Osmo’s acquisition, its first overseas one, for $120 million in a stock-and-cash deal in 2019.

It propelled Byju’s to tap global markets especially the US.

The fusion of digital gameplay and physical interaction creates fun and nurturing play experiences designed for all kids.

“The core technology is the reason we decided to acquire Osmo,” says Kishore.

Osmo’s revenue was at about $25 million that time and that has grown four times in two years to around $110 million.

In July this year, Byju’s acquired US-based digital reading platform Epic for $500 million, strengthening its position in the education technology (edtech) sector. The acquisition would provide it with a boost in the overseas market.

The acquisition will help Byju’s expand its US footprint by providing access to the more than two million teachers and 50 million kids in Epic’s existing global user base, which more than doubled over the last year.

Epic, meant for children up to 12 years of age, has a collection of over 40,000 popular, high-quality books, audiobooks, and videos from more than 250 of the world’s best publishers available on subscription.

“As we scale up internationally and in the US, which is an important market for us, there is a strong complementarity (in terms) of distribution that Epic has,” says Kishore.

Byju’s is aiming to become one of the largest players in the space in the US, with a target to hit revenues of $1 billion in the next three years.

In the domestic market, Byju’s closed the deal to acquire Aakash Educational Services for nearly $1 billion in April.

With over 215 centres and a student count of more than 250,000, Aakash provided test preparatory services to students preparing for medical and engineering entrance exams, school and board exams.

Kishore says when Byju’s was looking at tapping the test preparation space, it realised the future of learning was hybrid and this union of Aakash and Byju’s will bring together the best of offline and online learning.

However, a year after selling his start-up, WhiteHat Jr founder Karan Bajaj decided to move on this month.

Bajaj’s decision to move on after a year was already part of the plan, says Kishore.

When asked about the challenge of having enough leaders to run so many businesses, she said the company has added strong talent at the top of the management and expanded the bandwidth at these firms.

For instance, Trupti Mukker, a top executive at WhiteHat Jr and an alumnus of IIM-Bangalore, is now leading the firm.

But Kishore says Byju’s has given the founders of the businesses it has acquired the independence to operate separately and maintain their core culture.

Kishore doesn’t follow any playbook or consult M&A and venture capital experts for leading acquisitions at the firm.

She has learnt most of the skills related to negotiations and closing deals on the ground over these years at Byju’s.

“Some of the transactions that we have done are the largest in the industry,” says Kishore.

“There wouldn’t be many venture capitalists or private equity (people) who would have done transactions of this size (in edtech).”

One of the biggest factors that helped Kishore to do these acquisition deals is convincing the founders of the acquired companies about the vision of the partnership.

This included providing them resources to turbocharge the growth of their firms.

“The biggest thing that drives us is the vision to help more children learn better and fall in love with learning,” says Kishore, who also is a teacher at Byju’s.

Before joining Byju’s, she would teach part-time at the company during weekends.

Kishore also enjoys playing lawn tennis and table tennis. In the last few months, she has become very much interested in learning music and playing the keyboard and guitar.

In search of home