The anti-government protests near the presidential secretariat in Colombo resumed on Sunday after the authorities lifted the nation-wide curfew to celebrate the Vesak — what we call Buddha Purnima in India — festival.

Please click on the images for glimpses of Sunday’s protests. 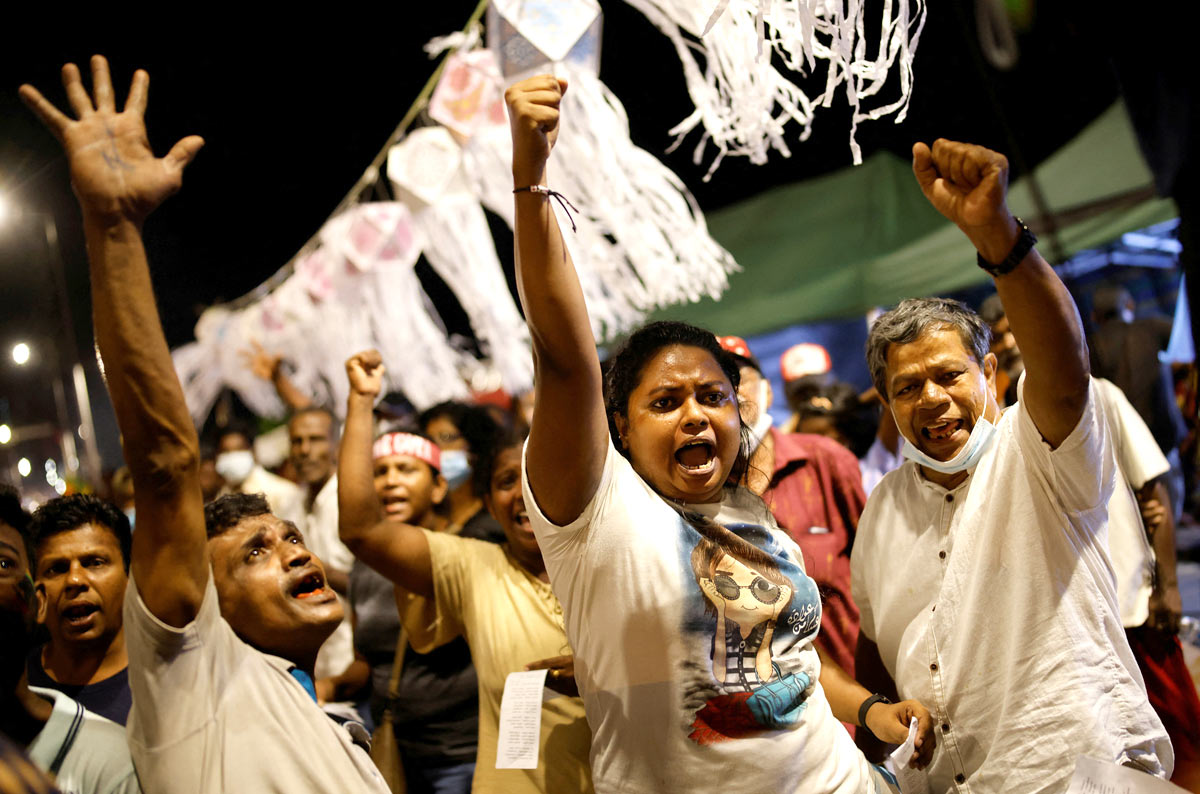 IMAGE: Anti-government demonstrators shout slogans near the presidential secretariat in Colombo, May 15, 2022.
There is a new prime minister — Ranil Wickramasinghe — in office, but the protestors are adamant that President Gotabaya Rajapaksa resign. Photograph: Adnan Abidi/Reuters 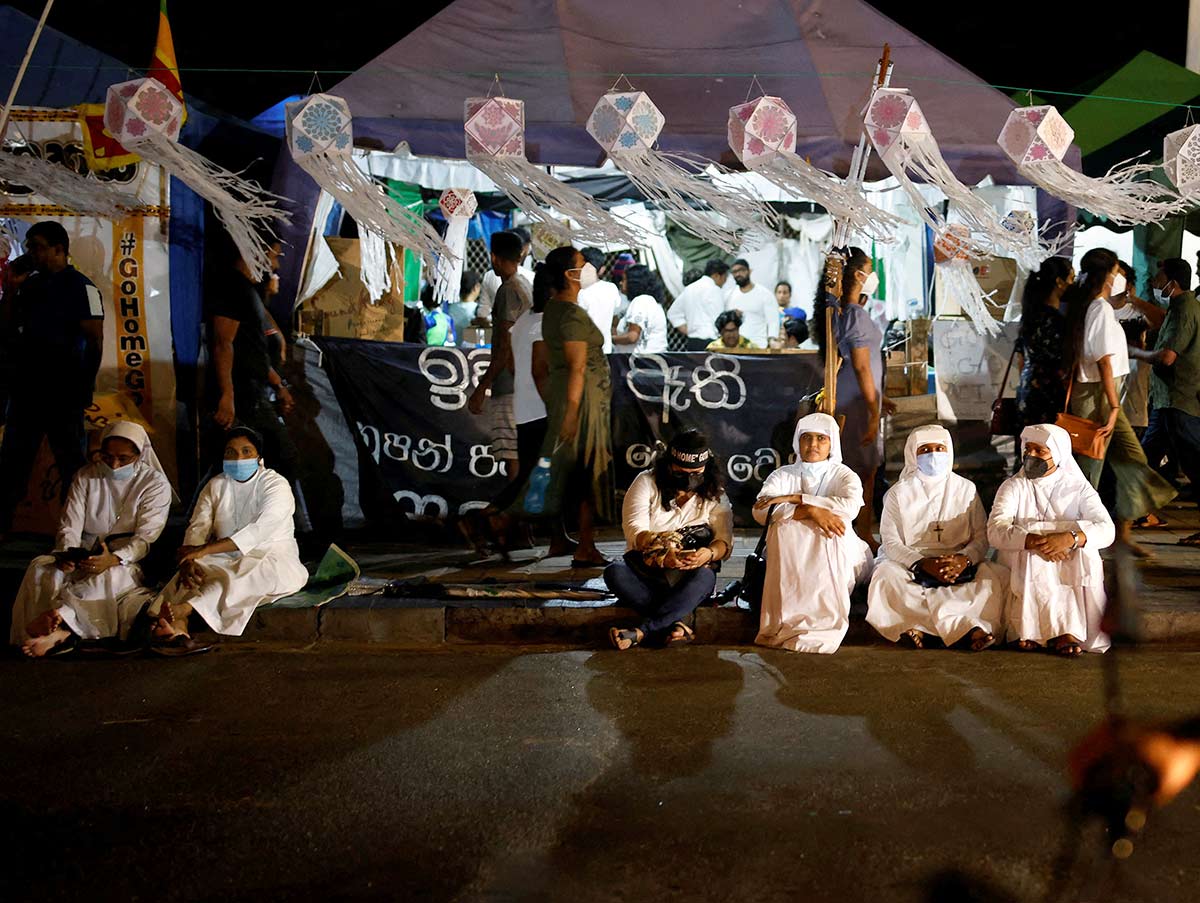 IMAGE: Catholic nuns at the protest. 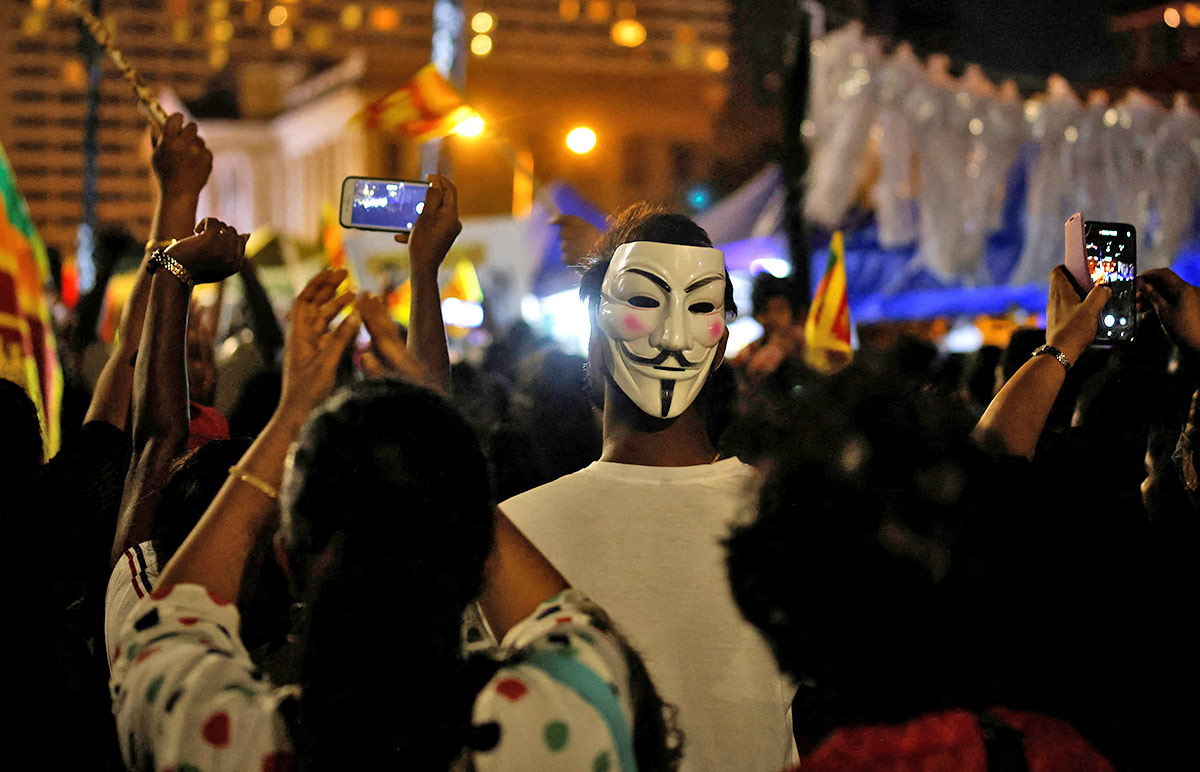 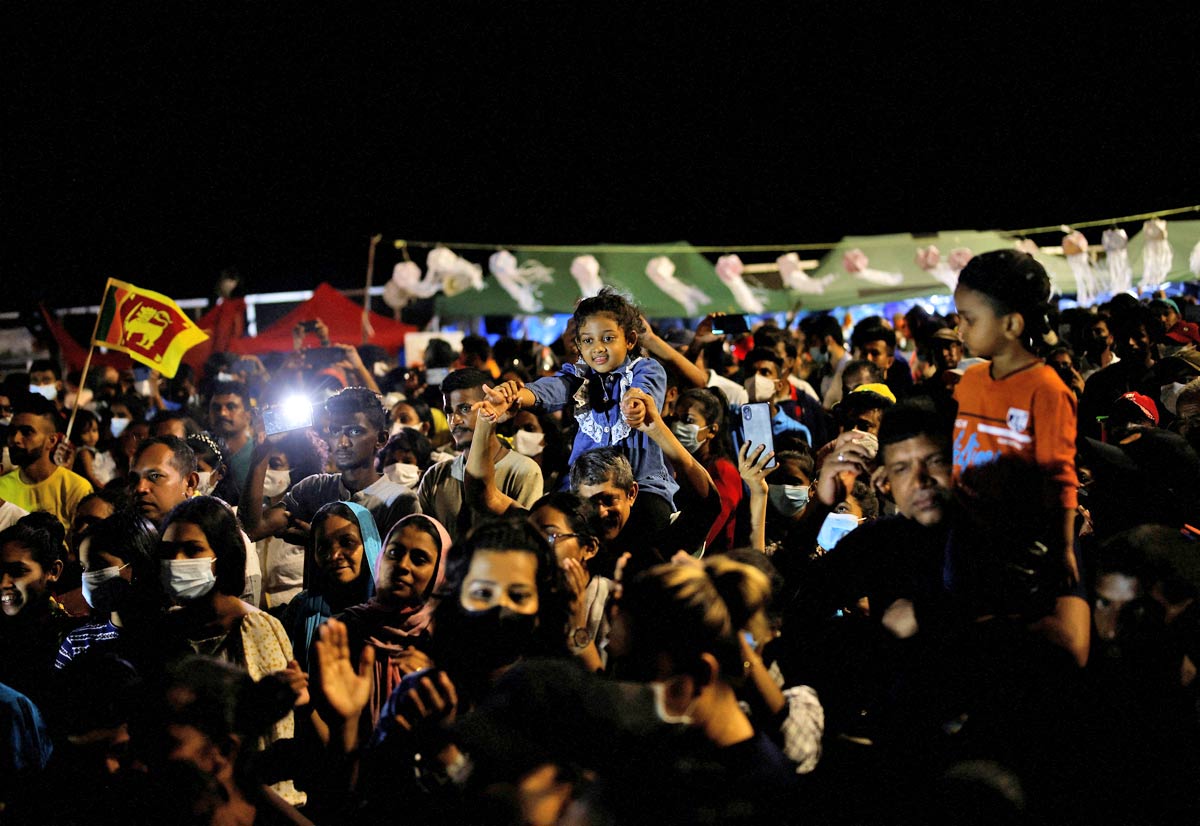 IMAGE: The outrage over Sri Lanka People’s Front supporters’s brutal attacks spread to other parts of the country where anti-government demonstrators destroyed Rajapaksa family memorials and several homes owned by SLPF leaders in southern Sri Lanka, the Rajapaksas’s political domain.
Mahinda Rajapaksa, who resigned as prime minister last Monday, had to flee Colombo with his family and seek refuge at a naval base in Trinvomalee in north eastern Sri Lanka. 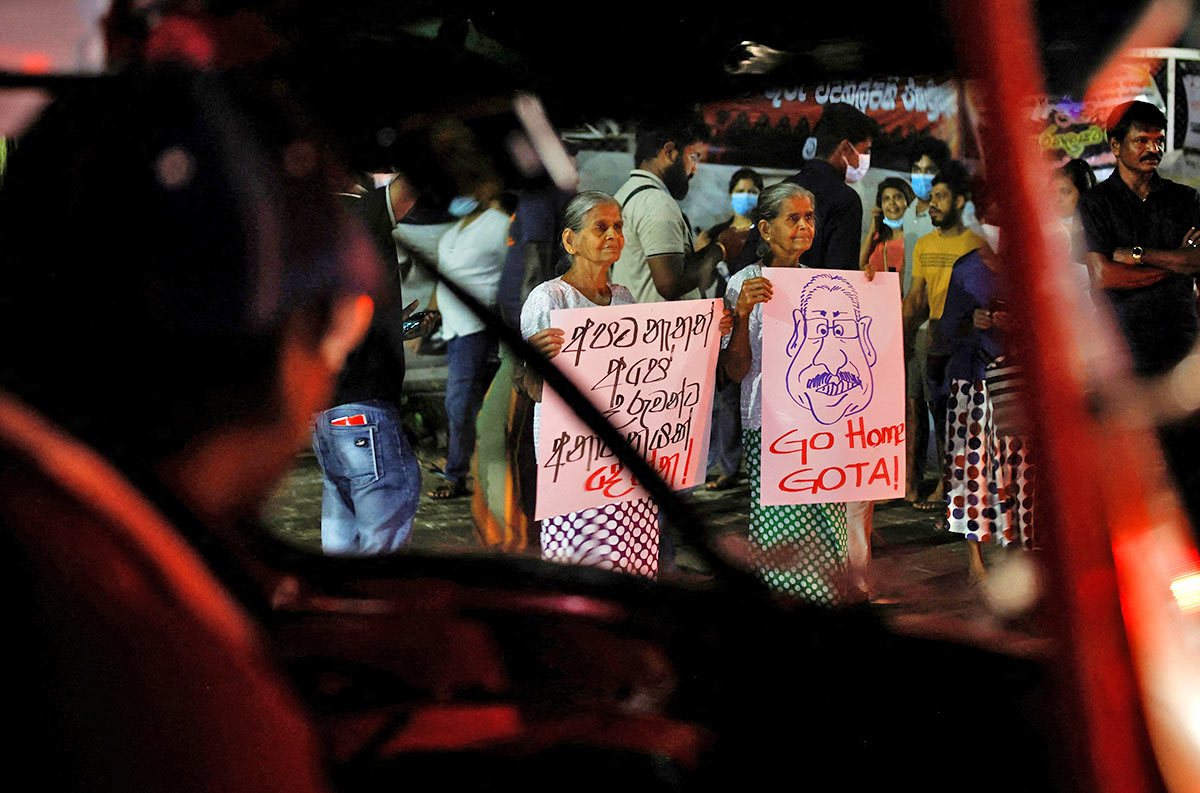 IMAGE: Despite the month-long angry protests demanding that he resign and accept responsibility for causing Sri Lanka’s current economic ruin, Lieutenant Colonel Nandasena Gotabaya Rajapaksa (retd) has refused to step down as president. 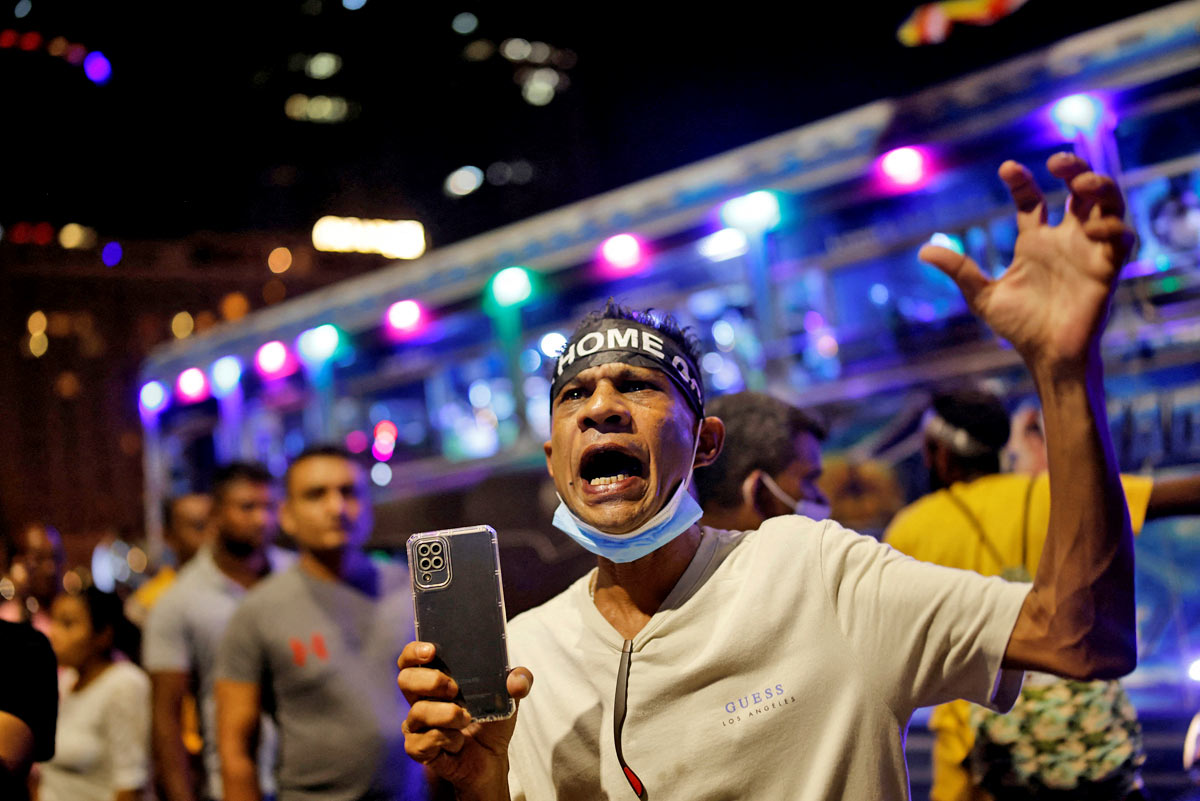 IMAGE: Prime Minister Wickramsinghe has begun consultations with respresentatives of the International Monetary Fund and the Asian Development Bank for urgent funds that could help Sri Lanka emerge from its economic nightmare.
Wickramasinghe has warned Sri Lankans that things will get worse before they get better. Ominous words indeed. 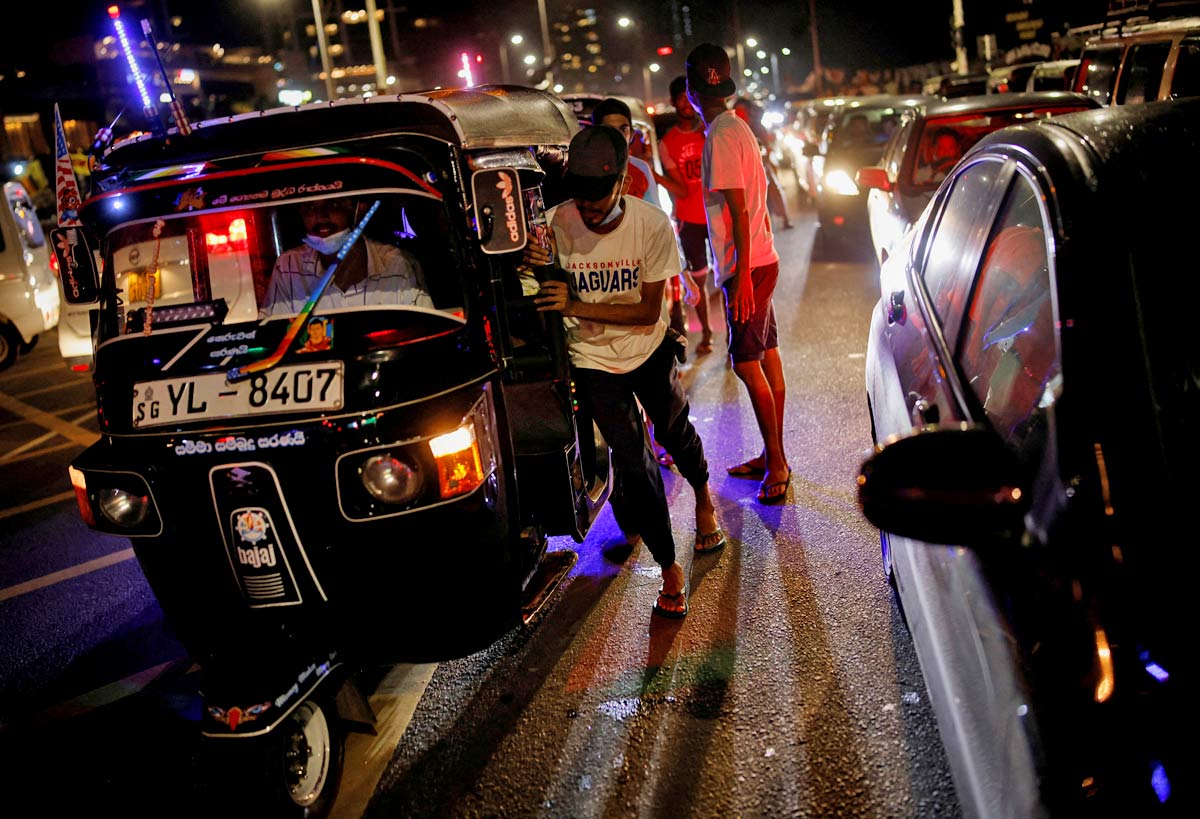 IMAGE: Anti-government demonstrators push an autorickshaw forward amidst traffic after it ran out of fuel. Long queues at petrol pumps and at outlets dispensing gas cylinders have been recurring images of Sri Lanka’s economic crisis. IMAGE: Anti-government demonstrators want Mahinda Rajapaksa to face justice for the havoc his supporters wreaked in Colombo last week, but for now the politician who was twice president and considered Sri Lanka’s most popular politician this century remains out of the law’s grasp, under the protection of the Sri Lankan military which has grown more powerful under the Rajapaksas’ dispensation. 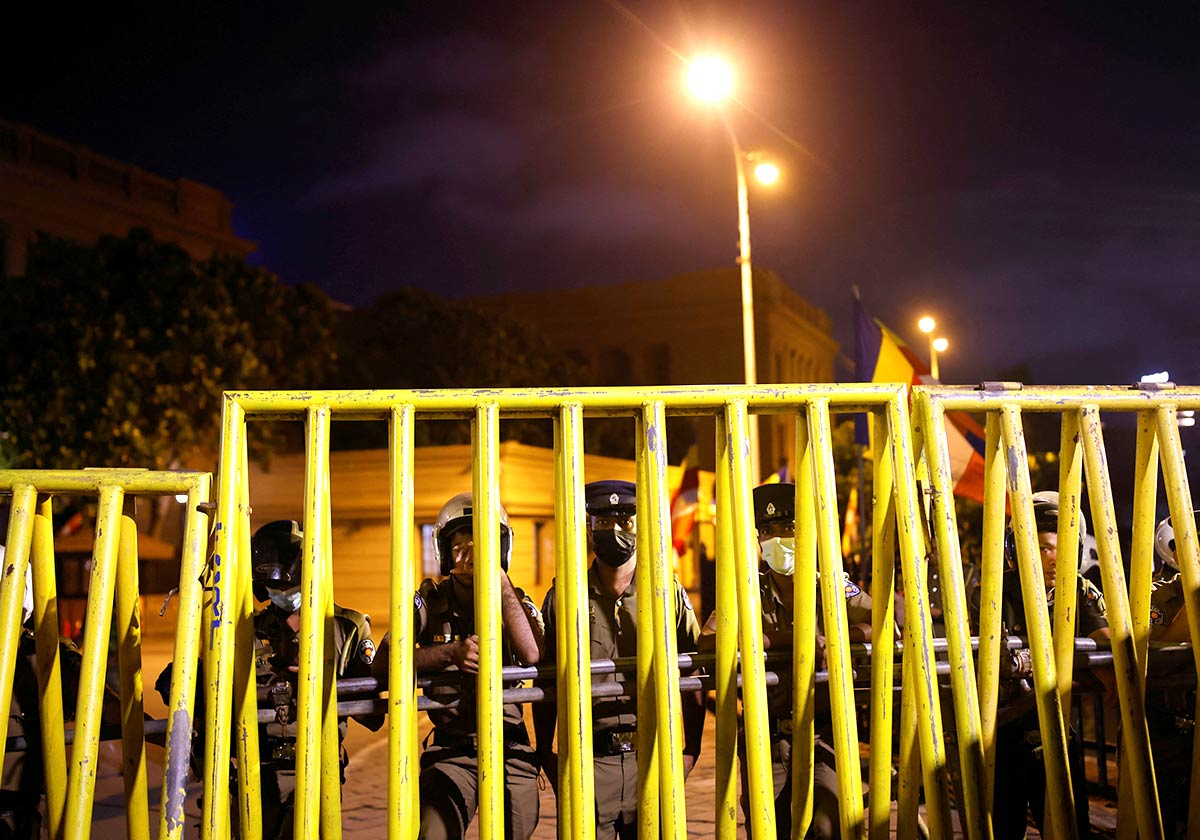 IMAGE: Policemen stand guard behind barricades outside the presidential secretariat.
After last Monday’s riot, anti-government demonstrators tried to over-run Mahinda Rajapaksa’s Temples Trees official residence, forcing the 76 year old to take an urgent helicopter ride to Trincomalee with his wife Shiranthi Wickremesinghe Rajapaksa (who once represented Sri Lanka in a Miss World contest) and their sons.

‘Civil services aspirants must think out of the box’

Police register complaint against 10 persons for ‘auction’ of GP seats

Hollywood Rewind | Titanic: The ship has sunk, only memories remain

8 Unanswered Questions From 'Game Of Thrones' Episode 2: 'A Knight Of The Seven Kingdoms'