Their numbers were reportedly added to the list when the political struggle was playing out in Karnataka’s corridors of power amid successive attempts by the BJP to topple the coalition government in 2019. 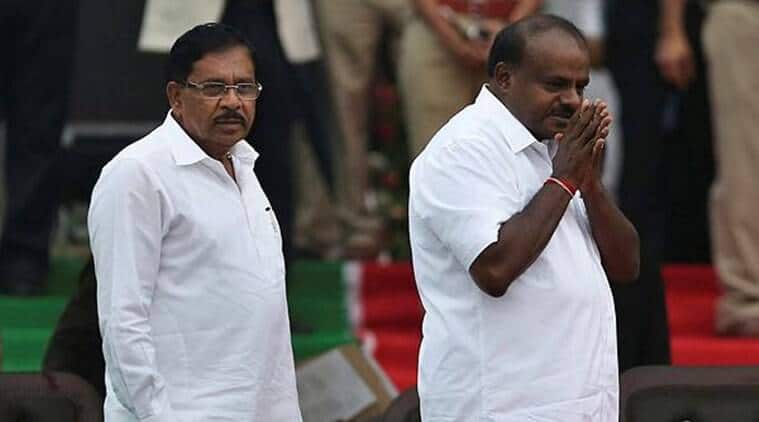 Key political players in Karnataka, including the then deputy chief minister G Parameshwara and the personal secretaries of then chief minister H D Kumaraswamy and former chief minister Siddaramaiah, may have been potential targets of surveillance by the Pegasus spyware in the run-up to the collpase of the Congress-JD(S) alliance government in 2019, digital news portal The Wire reported on Tuesday.

Their phone numbers are part of the leaked database which was first accessed by French non-profit Forbidden Stories and Amnesty International, and then shared with 16 media partners.

However, in the absence of forensic analysis, it cannot be confirmed if their phones were successfully breached, The Wire reported.

But their numbers were reportedly added to the list when the political struggle was playing out in Karnataka’s corridors of power amid successive attempts by the BJP to topple the coalition government in 2019.

The Congress-JD(S) coalition government fell in 2019 following a 14-month tenure after it lost a confidence motion moved by the then Chief Minister H D Kumaraswamy by six votes in a House where 20 coalition MLAs remained absent.

The confidence motion moved by Chief Minister H D Kumaraswamy received 99 votes in favour and 105 against it. After losing the trust vote, Kumaraswamy resigned, paving the way for the BJP government to take over with B S Yediruppa at the helm.

The crisis had accentuated after rebel coalition MLAs resigned — 13 from the Congress and three from the JD(S) put in their papers since the beginning of July 2019 till the confidence motion was held later that month — amid allegations raised by the coalition government that the BJP was indulging in horse-trading.

Many of the rebel MLAs were subsequently disqualified by the Speaker but later joined the BJP, contested bypolls and were re-elected to the Assembly.

After the government was toppled, Siddaramaiah had said, “The BJP directly influenced all MLAs who were absent today except one MLA Nagendra who obtained permission. They have been prevented from coming to the House. This is a betrayal of democracy. They have misled the MLAs on the anti-defection law and lured them through horse-trading.”

The then ruling coalition in Karnataka had referred to BJP’s effort to capture power as ‘Operation Lotus’ — before the government collapsed in 2019, there had been at least five failed attempts by the BJP to capture power in the state.

Amid the resignation of Congress MLAs, Rahul Gandhi had alleged that the saffron party uses “money power” and “intimidation” to topple governments. “BJP uses money power or threat to topple governments wherever it can. You saw this first in Goa, in the Northeast, and now are trying to do the same in Karnataka. It is their way of functioning. They have money, power, and they use it. This is the reality,” he had said.

Reacting to the development, Venkatesh, who was Siddaramaiah’s personal secretary, told The Wire, “I don’t know whether my phone was a target for snooping. All I can say is that I don’t do anything illegal. If what you are claiming is true, it is wrong and I strongly condemn such an action.”

These reports come at a time when there has been growing speculation on B S Yediyurappa’s exit as Chief Minister amid talks of a change in leadership in Karnataka.

Even as Karnataka BJP chief Nalin Kumar Kateel’s purported audio conversation, hinting at a possible leadership change in the state, has only added to that speculation, senior BJP leader Basavaraj Patil Yatnal on Monday said that the PM will pick a leader who is honest, pro-Hindu and capable of bringing the party to power in the next polls as CM.

On Tuesday, Congress stepped up its attack on the government over the Pegasus snooping controversy and demanded a probe by a Joint Parliamentary Committee. The opposition party along with other parties caused a huge uproar and also stalled proceedings of both houses of Parliament while raising the issue.

This was after reports emerged on Monday stating that senior Congress leader Rahul Gandhi, election strategist Prashant Kishor, former Election Commissioner Askhok Lavasa, ministers Ashwini Viashnav and Prahlad Patel, TMC leader Abhisekh Banerjee, a Supreme Court staffer who had accused the then CJI Ranjan Gogoi of sexual harassment in 2019 are among those whose phones were either breached or were listed as potential targets by the Israeli company NSO Group’s Pegasus spyware.

Wife of bike rider, killed after ‘beaten by cop,’ attempts to end life

11 days after fuming about a coughing passenger, a US bus driver died of coronavirus

Dan Crenshaw: 5 Things About Politician Who Pete Davidson Mocked & Apologized To On ‘SNL’

Vijayashanti is not keen on acting with Chiranjeevi