Justices Indira Banerjee, Vineet Saran and K M Joseph were on Tuesday sworn in as judges of the Supreme Court in the order of seniority notified by the Centre. 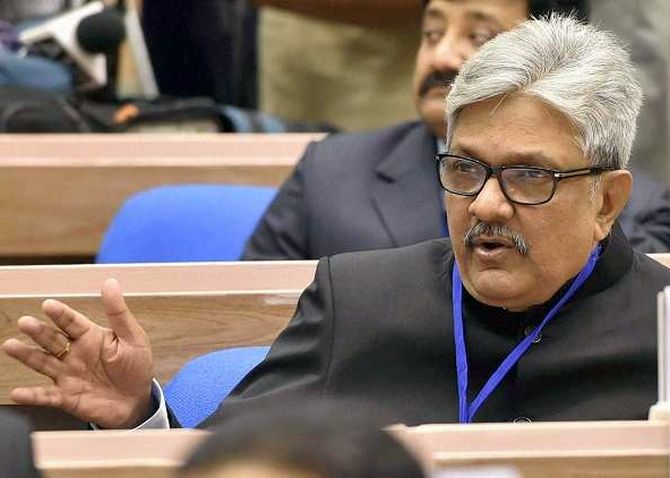 The swearing-in ceremony started at 10.30 am in the chief justice of India’s courtroom with Justice Banerjee the first to take oath followed by Justice Saran and then Justice Joseph.

The oath of office and secrecy was administered to the three judges by Chief Justice of India Dipak Misra in a packed courtroom in the presence of all judges, law officers and advocates.

With the appointment of the three judges, the total strength of the judges in the apex court has gone up to 25 against the sanctioned strength of 31.

While Justice Banerjee was the chief justice of Madras high court, Justice Saran and Joseph were chief justices of the high courts in Odisha and Uttarakhand respectively.

Justice Joseph took oath as an apex court judge amid a row with the Centre over his seniority being lowered on his elevation.

The Centre on Monday said it went purely by the “time tested” principle of high court seniority list. It came out with a notification on the appointment of the three judges to the apex court last Friday, putting at third position the seniority of Justice Joseph.

Judges, including members of the collegium comprising Justices M B Lokur, Kurian Joseph and A K Sikri, yesterday met Chief Justice Misra to raise their concerns on the seniority issue concerning Justice Joseph.

The judges were reported to be of the view that there was need to sit together and ponder over the issue.

Court sources said nothing much could be done at this stage and the concerns raised by some of the judges would be discussed after the three judges were sworn in today.

Except for Justice Ranjan Gogoi, a member of the apex court collegium who was on leave, others had “informally” deliberated on the Centre’s decision to lower the seniority of Justice Joseph, the sources said.

However, it was decided that the oath-taking ceremony should take place.

The CJI, who heads the collegium, assured the judges that he would consult Justice Gogoi who is the senior most after him and take up the issue with the Centre, the sources said.

The Centre had said none of the three judges will become chief justice of India as there are other SC judges who have been elevated to the apex court earlier and will retire later.

In the notification, Justice Banerjee was number one, followed by Justice Saran.

Convention dictates that the seniority of the judges is determined in accordance with the order of names notified by the government.

The warrants of appointment of the three judges were signed by the President on August 3.

Justice Joseph’s elevation to the apex court puts an end to a protracted stand-off between the government and the judiciary.

He headed a bench which had quashed the imposition of President’s Rule in the state in 2016. Uttarakhand was then under Congress rule.

On January 10, the collegium recommended the name of Justice Joseph, along with that of senior advocate Indu Malhotra, for elevation to the apex court.

However, the government returned Justice Joseph’s name for reconsideration and went ahead with the appointment of Justice Malhotra.

On May 16, the collegium had in-principle reiterated the decision to recommend Justice Joseph’s name for elevation to the apex court. The recommendation was sent to the government in July and it was accepted.

The collegium’s January 10 resolution, when Justice Joseph’s name was recommended for elevation, said “he stands at Sl. No. 45 in the combined seniority of High Court Judges on all-India basis”.

According to the July 16 resolution of the collegium, Justice Banerjee stood at Sl. No. 4 and Justice Saran stood at Sl. No. 5 in the combined seniority of high court judges on all-India basis.

The virus has deprived senior citizens of AGMs, sweets and savouries