‘But will there be matching action as far as tribals are concerned on the ground?’

“Having a President who is tribal and a woman is wonderful, but it also highlights the paradox that both women and tribals are neglected,” says Ganesh N Devy, thinker, writer, chairman of the People’s Linguistic survey of India which discovered that there are more than 780 languages spoken in India.

Professor Devy is amongst the leading experts on India’s indigenous tribes and founder of the Adivasi Academy, a multilingual school with a vast library and health centre in Gujarat.

In a two-part interview with Rediff.com‘s Archana Masih, Professor Devy discussed the neglect of tribal communities and why his happiness about a tribal woman Presidential candidate is clouded by the prevailing political ecosystem that has reduced the President to a rubber stamp.

Do you believe Droupadi Murmu’s election as the First Citizen will improve the lives of Indian tribal communities in any way? Or will her election as President merely be symbolic?

As of now, she is a candidate even though her being elected is more or less certain. I am very happy that a woman and a tribal is the Presidential candidate.

However, the President of India has to work within a political ecosystem. The ecosystem that prevails today has shown that the President’s stake in most matters is reduced to a mere rubber stamp functionary.

Jignesh Mewani was illegally arrested and taken to Kokrajhar, Assam, despite being a people’s representative from Gujarat.

If that is the prevailing ecosystem, then one wonders how effective will a tribal or a woman president be in improving the condition of women or tribals.

I am happy, no doubt, but my happiness is clouded by the political ecosystem.

On whether it will improve the situation of tribals in the country?

I hope it does. However, for the last 7-8 years, the giving away of land documents to tribal farmers under the FRA [Forest Rights Act] has slowed down significantly.

The leasing of land for mining in tribal areas has increased significantly. The worst is the recent news about a grant from the ministry of culture about a survey related to the genetic history of tribal communities. The lead scientist in that project has stated that this is for determining racial purity as reported by the New Indian Express on May 30.

37 tribal groups are identified for genetic studies. If that continues, despite having a tribal woman President, that would be really worrisome.

Therefore, having a tribal President will be a great showpiece internationally, but will there be matching action as far as tribals are concerned on the ground?

This sentiment is felt by many among the tribal communities and they have been voicing these feelings and apprehensions.

How have successive governments treated the tribals of India? What in your assessment has been most lacking in governmental response to the tribals?

One of the members of the Constituent Assembly was Mr Jaipal Singh Munda, a great thinker, member of the tribal community, an ICS officer who captained the Indian hockey team that won Gold at the 1928 Olympics.

When the Constituent Assembly was holding discussions about bringing tribals into the Republic, Jaipal Singh said that tribals will join the Indian Republic if they are on an equal footing with the other citizens of the country.

The tribals joined the Indian Republic voluntarily on that promise made to them by the makers of the Constitution.

For nearly five decades since Independence, the government’s orientation was to preserve the tribal way of life without disturbing their isolation and without imposing outside influence.

In 1999 under the Atal Bihari Vajpayee government an independent ministry of tribal affairs was carved out from the social justice ministry.

The orientation changed from isolation to assimilation of tribals into the mainstream because the RSS refers to tribals as vanvasis [forest dwellers], not as Adivasis and does not accept them as the indigenous people of India.

There are seats reserved for tribals, but what happens is that the MLAs or MPs coming from tribal areas are reduced to a minority in any major political party. Since their fundraising abilities are severely limited, their standing in the party is always at the tail end. As a result, their voice is rarely heard within the party.

The system is such that all Constitutional provisions are exercised in a tokenistic way. Adivasis constitute nearly 9% of the country, roughly numbering 13 crores (130 million) which is the population of one or two European countries put together, but the delivery, at the end of the day, has remained very insignificant.

There are more than 1,000 universities in the country, but there are perhaps only three situated in tribal areas.

There is not a single tribal taluka which has a multi speciality hospital.

Tribals have to travel long distances for education, healthcare and employment.

Tribal languages are suffering from severe neglect. Sanskrit, which is not actually spoken, is included in the Eighth Schedule of the Constitution [which includes the official languages of India] while Bhili spoken by nearly 2 crores (20 million) and Gondi by over a crore (10 million) is not included.

Their voice is not heard.

Having a President who is tribal and a woman is wonderful, but it also highlights the paradox that both women and tribals are neglected. This shows absolute hypocrisy. 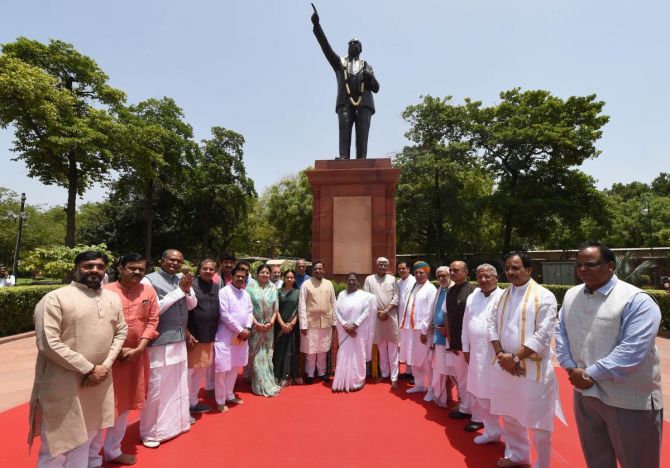 The major problem faced by tribals is that their land is coveted by industry with scant concern for tribal interests and livelihood. Have all governments been guilty of callousness and neglect or has any government at the Centre or states been better in reaching out to the tribals?

The north eastern Sstates have their own tribal councils. The attention to tribals in those states is relatively better because the councils own the land and not the government. This means that common land which is normally utilised for industry, mining and intervention in forest is under the control of the councils.

However, in the rest of the country, politics is dominated by the flow of money. Therefore, politicians are driven to taking decisions which are conducive to this flow of money which is a sad situation for a country where the poor outnumber the rich and super rich.

Governments of different hues have found it convenient to suppress, conceal, neglect or ignore the interests of tribals as far as development indicators are concerned.

When it comes to elections, of course, tribal communities acquire importance because they have numbers. Hence, again there is a paradox that while there is political space for the tribals, there is no corresponding space for them in the economy or development.

It is a jinx, a puzzle that we need to crack someday and that can happen only when there are governments which are genuinely pro poor and progressive.

Dentistry in a ‘state of crisis’, says report