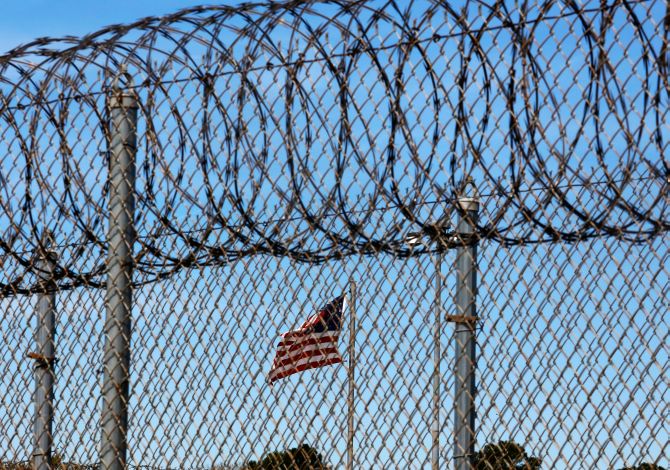 Nearly 2,400 Indians are languishing in various American jails for illegally crossing the United States border to seek asylum in the country, according to the latest figures.

These detainees, a significant number of whom are from Punjab, are seeking asylum, claiming that they ‘experienced violence or persecution’ in India.

As many as 2,382 Indians are lodged in 86 jails in the US, according to the information obtained by North American Punjabi Association (NAPA) through Freedom of Information Act.

According to figures as of October 10, a total of 377 Indian nationals are detained at California’s Adelanto Immigration and Customs Enforcement (ICE) Processing Center, 269 at Imperial Regional Adult Detention Facility, 245 at the Federal Correctional Institution Victorville, and 115 at Washington State’s Tacoma ICE Processing Center.

“Most of the detainees at the federal facilities are asking for asylum claiming that they ‘experienced violence or persecution’ in their home country,” NAPA president Satnam S Chahal told PTI.

“This is a matter of serious concern that thousands of Indians, with an overwhelming majority of them being from Punjab, are languishing in jails in the US,” he said.

Chahal who has been working in the field for past several years alleged that there is a nexus of human traffickers and officials in Punjab, who encourage a young Punjabis to leave their homes to illegally enter the US and charge Rs 35-50 lakhs from each individual.

Human trafficking is a criminal act which affects the global community and consequently Punjabis are too victims of this episode, he said.

“The Punjabi enthusiasm to migrate to affluent countries in search of greener pastures has given the traffickers to exploit them,” Chahal said.

“Failure to reach their promised destination leads to deportation, exploitation, indebtedness, imprisonment and even death,” he rued.

The NAPA urged the Punjab government to strictly enforce human trafficking laws that have been passed by the State Assembly in recent years.

The Trump administration has introduced a number controversial policies in line with its hardline stance on immigration.

Last week, the administration decided to restrict the entry of illegal migrants who cross the southern border with Mexico to seek asylum in the US.

Explained: Why has Navjot Singh Sidhu resigned from Punjab Cabinet

Garrett VS Blake: Hunkiest Pics Of The Guys Becca Will Chose Between On ‘Bachelorette’ Finale