About 15 lakh people in 770 villages spread over three districts are estimated to benefit from the 12 projects. 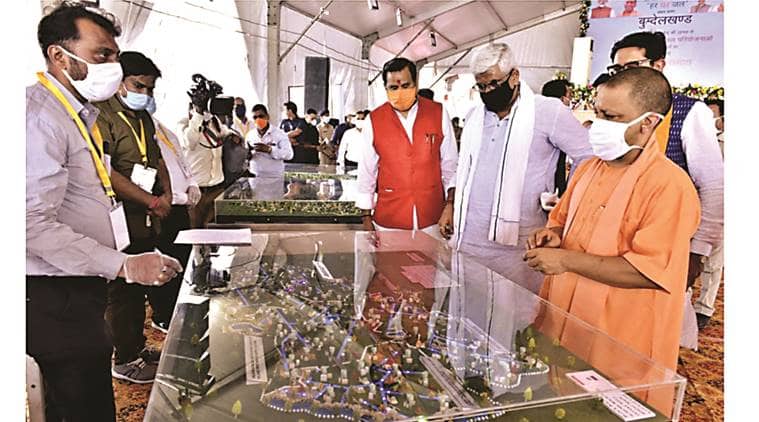 Speaking on the occasion, Shekhawat said under the Har Ghar Nal ka Jal Yojna (piped water in every household), Prime Minister Narendra Modi has pledged to cover all houses by 2024 scheme while Adityanath has sought to achieve the target by 2022.

The minister said the scheme will ensure 55 litres of water per person in Jhansi, Mahoba and Lalitpur districts of Bundelkhand. He stressed on recycling household waste water for non-drinking purposes.

About 15 lakh people in 770 villages spread over three districts are estimated to benefit from the 12 projects.

The ground-breaking ceremony began with recitation of shlokas by pandits with everyone, including the chief minister and other ministers and officials, wearing masks.

Adityanath blamed the previous government for exodus of people search of jobs and lack of progress in Bundelkhand. Listing steps taken by his government, he said the proposed Bundelkhand Expressway will be “vikas ki lifeline” lifeline of progress, boost development and attract jobs.

The foundation stone of the expressway, which will connect with the National Capital Region, was laid by PM Modi in February this year. The CM said 40 per cent of earth work has been completed. The chief minister also informed that the second imortant project in the region was the defence corridor, which will have two nodes in Bundelkhand region.

He said Bundelkhand was earlier infamous for mining mafias, who held the administration hostage at their will, but no more under his watch.

On coronavirus, he said his government is trying to work out solutions and the water supply scheme is also a step towards better health.

Gehlot writes to PM Modi, urges to waive off farm loans across the country

J&K: Woman killed, another injured in Pak shelling along LoC in Poonch

RBSE BSER Rajasthan Board 12th Science Result 2020: When and where to check marks