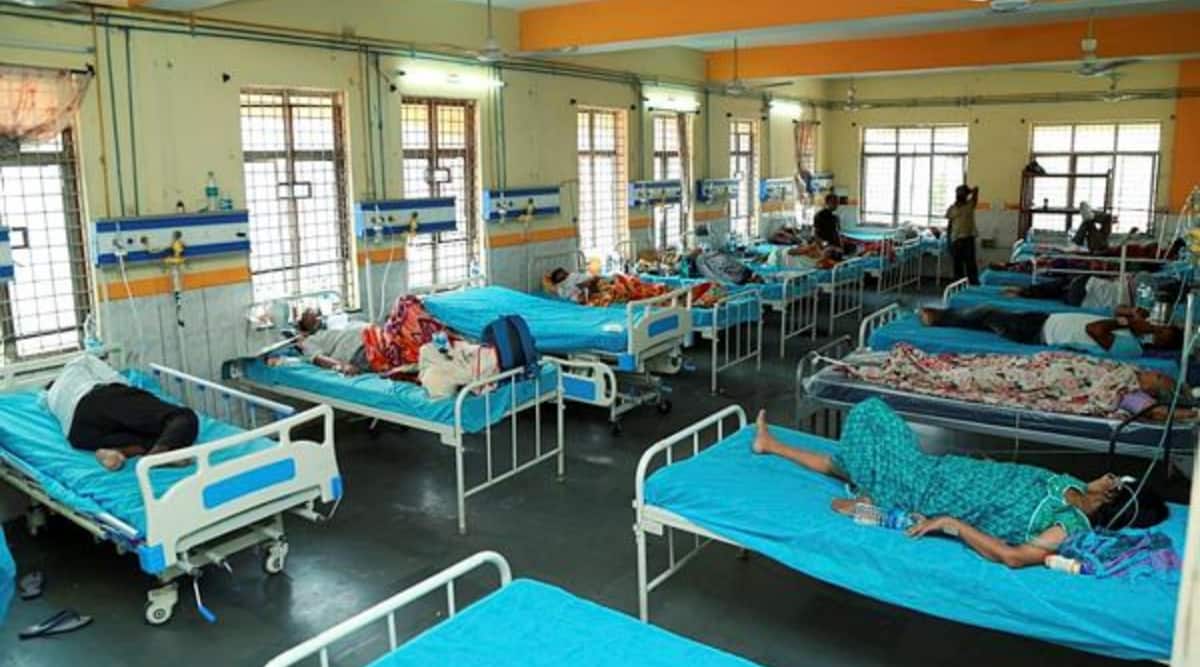 As Telangana faces a surge in the number of new coronavirus cases, the health and medical infrastructure continues to scramble to deal with the rising demand for oxygen beds and ICUs. As of Monday, Gandhi hospital in Hyderabad, which is Telangana’s premier government hospital for treatment of COVID-19 patients, has run out of ICU beds. The same is the case at Telangana Institute of Medical Sciences (TIMS), a 1261-bedded hospital that was set up last year exclusively for COVID-19 treatment. All the 619 and 137 ICU beds in Gandhi hospital and TIMS, respectively, remain occupied.

While, according to the official data, the state has ramped up the number of total available beds by 26,992 beds (from 18,352 as of September 29, 2020, to 45,344 as of noon on April 26, 2021), a closer look at the data reveals that a majority of these additions are regular beds which are mostly lying vacant as of date. A comparison of hospital bed availability on these two dates shows that in seven months, the state has managed to add only 4,405 ICU beds and 7,264 oxygen beds. While it managed to add 15,323 regular beds in government and private hospitals together, as many as 15,233 of a total 19,489 regular beds available in the state are lying vacant as of April 26.

Telangana has been witnessing a gradual rise in positive cases since mid-March and the Health Department had warned of a steep rise in cases till mid-May. Allaying fears of a possible shortage of beds for treatment, Dr. G Srinivasa Rao, Telangana’s Director of Public Health and Family Welfare, while addressing the media on April 17, said that the state has ramped up the number of beds for COVID treatment from about 18,000 in September 2020 to 39,000 beds as of April 16. He had also stated that the number of beds was to further increase to 53,500 in the coming weeks. On April 24, Chief Secretary Somesh Kumar instructed District Collectors to immediately set up an additional 12,000 beds with an oxygen facility and that the government has sanctioned Rs 20 crore for this purpose.

Telangana has an active COVID-19 caseload of 65,597 as of April 26. With 43 deaths reported on Sunday, the total fatalities stand at 2,042. The recovery rate has declined to 83.16 per cent. As many as 20,009 patients are currently under treatment in different government and private hospitals across the state.

During the same period, when hospitals were increasing their capacity, Gandhi hospital reduced its available oxygen beds from 1,000 to 600 beds and managed to add only 119 ICU beds to take its tally from 500 to 619 ICU beds. The number of regular beds, however, went up from 390 to 650 beds. As of April 26, all 650 regular beds are lying vacant. While all 619 ICU beds here are occupied, only 291 oxygen beds were vacant as of date.

Similarly, a COVID-exclusive government hospital like TIMS, set up in the middle of a pandemic, is 67 ICU beds fewer today as compared to September last. During this time, it managed to add only 13 oxygen beds to take its tally from 830 to 843 oxygen beds. All of the 137 ICU beds at TIMS are occupied as of date, whereas 492 of the total 843 oxygen beds are vacant as of date.

Other major hospitals including Mahatma Gandhi Memorial (MGM) Warangal and Government General Hospital, Mahabubnagar have not added a single ICU bed. They have 80 and 60 ICU beds respectively. The number of oxygen beds in these two hospitals was upped by 320 and 130 beds. The Government General Hospital in Nizamabad got 18 new ICU beds for COVID treatment in the last seven months, taking its number of ICU beds from 72 to 90 beds. 138 oxygen beds were added to the Nizamabad hospital to up its tally from 162 to 300 as of date.

‘Healthcare system has collapsed in the country’

As of date, about 77.8 per cent of the total 20,009 patients who are under treatment across the state are either in ICU beds or on oxygen support. Besides, the state in its present maximum capacity can accommodate only another 3,409 patients in ICU and 7,042 patients on oxygen support. The test positive rate that stood at 0.4 percent on March 14 has risen to 9.5 percent on April 25, with daily cases rising from 157 to 6,551 during these days. The highest ever daily spike was registered on April 24 when the state reported 8,126 new cases.

“The healthcare system is not only burdened but it has collapsed across the country,” said Dr. Sanjeev Singh Yadav, Vice-President of the Indian Medical Association, Telangana, adding that the pandemic has exposed the shortcomings in the medical profession and years of mismanagement. “More and more people are testing positive and there are fewer doctors. A doctor is not able to spare a few minutes per patient and is sometimes not able to do justice to the job. He should be able to give at least 20 minutes per patient,” said Dr. Yadav, stressing that there is no one person or government to blame. He added: “The healthcare budget is less than 2 percent. While tertiary healthcare is improving, which is not the need of the hour, the primary and secondary healthcare system has collapsed long ago.”

The root cause of today’s crisis can be attributed to the failure of policymakers and arrogance of the political leadership, said Dr. K Mahesh Kumar, President of the Healthcare Reforms Doctors Association (HRDA), noting that the governments had sufficient time to prepare for the second wave of viral infections and alert the public. “Something as basic as testing infrastructure is inadequate even after so many months of the pandemic. Labs still collect samples only between 9 am and 1 pm and a majority of the tests are Rapid Antigen Tests. We should have had virology labs and sufficient technicians in each district by now to carry out testing 24 by 7,” he said.

While Telangana is doing around 1.3 lakh tests a day, the total capacity for RT-PCR tests in the state is not more than 30,000 a day as per Health minister Eatala Rajender’s admission. “Late diagnosis of the infection is leading to hospitalisation and dependency on oxygen support while ventilators are fewer,” said Dr. Kumar.

According to Dr. Yadav, had the secondary and tertiary healthcare infrastructure been in good shape, today’s situation of burdening tertiary healthcare infrastructure would not have arisen. “Why are people panicky? It is because there is no one down there at primary health centers, community health centers, area hospitals, and district hospitals to tell them what to do. They are not able to cater to these patients.” A 15-day lockdown, Dr. Kumar said, is inevitable at the moment to reduce the caseload and make ICU beds available.

‘Not afraid of such cowardly attacks’: Kejriwal lashes out at BJP over Delhi Jal Board incident