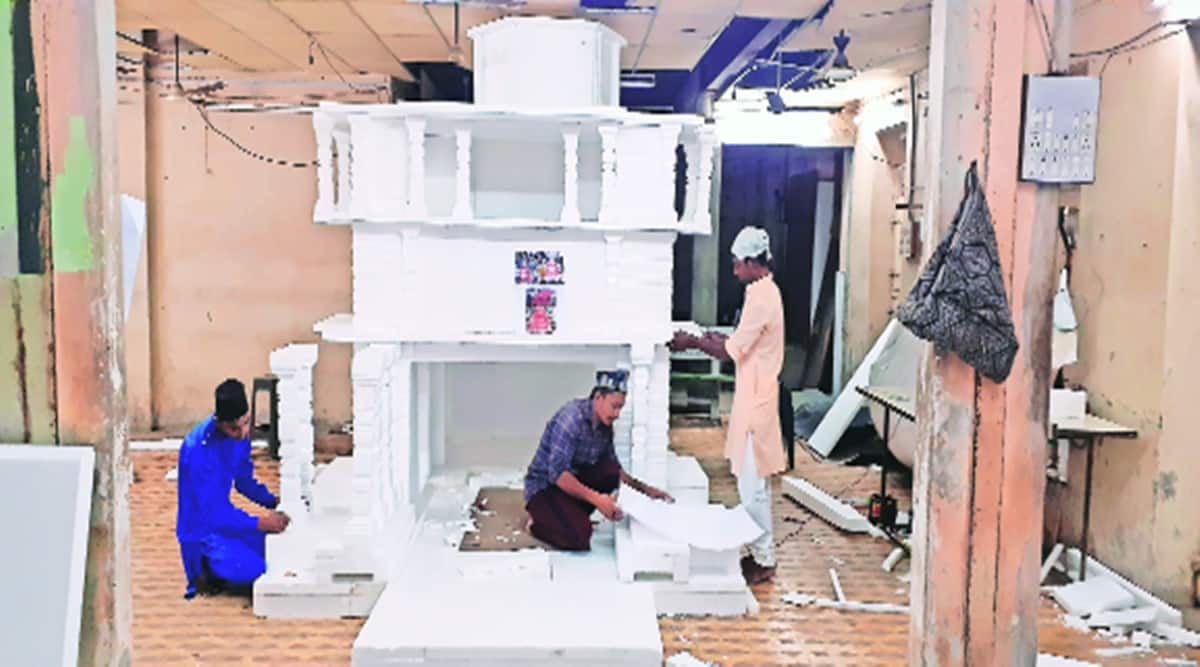 The Tazia makers of Surat who have been out of business for two years due to the Covid pandemic are building a model of the upcoming Ram temple in Ayodhya with thermocol, which will be placed at the pandal in Adajan area in Surat during the Ganesh Chaturti festival that begins from September 10. A two-feet idol of Lord Ganesh dressed as Lord Ram will also be placed in it.

Every year the Garden group of Adajan celebrates Ganesh Chaturti festival with different themes. Harsh Mehta, president of the group, collected photos and videos of the upcoming Ram temple in Ayodhya and approached Sultan Ansari, who leads Tazia makers in Begampura area, with a proposal to make the temple model on August 24.

Led by Ansari, eight Muslim artisans, including vegetable vendors and autorickshaw drivers, have been working for 10 nights on the thermocol model of the Ram temple that has 174 pillars with four dome structures. During the day, they do their regular jobs. The model of the Ram temple is 15 feet long, 14 feet wide and 14 feet in height.

Talking to The Indian Express, Ansari said, “Every year we make eight Tazias of different dimensions… Last year due to Covid, none was made and this year, we made just one. For the past 15 years, I have been into making Tazias. I learned the artwork from people who used to do it near my house during my childhood. I used to help them when I grew up.”

Ansari said that they accepted the proposal after taking permission from religious priests. “This is for the first time we are making a model of a temple and we hope that people will like our attempt. The structure is getting ready and we are hopeful of completing it by Tuesday or Wednesday. The artisans work from 7 pm till 6 am… In the coming years, if we get such orders, we will definately do it.”

Harsh Mehta said, “We are hopeful that the model will be ready by September 9, a day before the festival begins. We are also planning to make a selfie point at the pandal.”

Monday Memes: Netizens can’t get over Bigg Boss 13 as they come up with countless memes | Bollywood Life

We must question Narendra Modi on his election promises

‘I am not coming back. I was here’: Sheila Dikshit, Congress North East Delhi candidate