Like us, most other Indian passengers had calmed down and decided to sleep off the slight change in plans after Malaysian Airlines found us an Air India flight from Singapore the next evening. 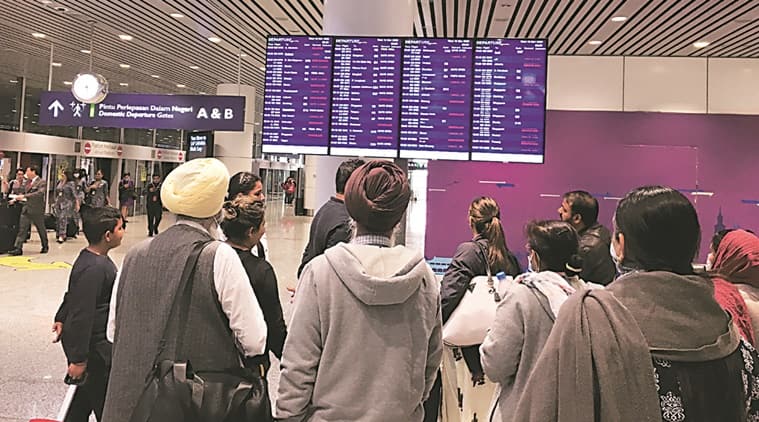 I had expected the funniest moment of a bizarre vacation to take place preferably in a Woolworths store in Sydney and ideally in the toilet paper aisle. Strangely and somewhat alarmingly, it had taken place surrounded by luxury perfumes in Singapore’s Changi Airport on Wednesday evening when a fellow stranded middle-aged passenger I won’t identify chose the wrong moment and words to try and lighten the mood. “Ab toh Sushma Swaraj bhi nahi hai humko bachane ke liye,” he said, laughing alone.

It is perfectly normal for an Indian citizen stuck abroad to invoke the late external affairs minister when his government can’t make up its mind about whether or not to allow him to return home.

For half a week before we had cut short our three-week trip, my mother and I had gawped at supermarket shelves devoid of toilet paper, serviettes and pasta among others, been taken aback at notices reminding customers to keep their hands on their wallets and not on fellow customers and had attended a baby brother’s wedding in a virus hotspot, all in a carefree manner that said – this will never happen to us.

Trouble began on Tuesday afternoon when soon after landing in Kuala Lampur, our connecting Malaysian Airlines fight to Mumbai was cancelled. Helpless airlines employees told us that they had received a circular from the Indian government prohibiting the entry of passengers from Afghanistan, the Philippines and Malaysia to India after 3 pm IST until March 31, mere hours before our arrival.

If being caught unawares by bad news has a visual representation, it is of chewing surprisingly good airline pasta high over the Australian Outback while a Korean film plays on the screen and a Malay bartender in the seat ahead begins to demolish the second of eight beers, even as your country chooses those precious few hours of flight mode to shut its borders to you.

Like us, most other Indian passengers had calmed down and decided to sleep off the slight change in plans after Malaysian Airlines found us an Air India flight from Singapore the next evening.
The next day, when we arrived at Changi airport, where stern airport employees scan, nod and point at you to wrap face masks tighter than is comfortable, the Indian government chose the moment when most of us had digested our lunches and lightened our stress and credit cards at the infinite shops inside, to deliver even more distressing news.

When an airport executive abruptly stopped issuing boarding passes to announce inexplicably that Air India would not be able to fly us back, nervous concern turned into full-blown panic.

As Malaysian Airlines employees continued to scan for other flights to accommodate us, the picture only became clear when a local Air India representative explained that the Indian government had issued yet another advisory, this time announcing a ban on passengers travelling from Afghanistan, Philippines and Malaysia from entering India until March 30.

Airlines flying Indian passengers from these countries into India, said the man, had been threatened with steep fines. Hours previously, he claimed, Air India had coughed up Rs 12 lakh as a penalty for ferrying Indians to Chennai from Malaysia.

The clock was ticking ever closer to the boarding hour of our now cancelled flight and the threat of a vague 24-hour limit beyond which we could not stay in the airport without boarding a flight.

The Mexican standoff would have continued unless the Air India rep — who is the hero of this story for doing his job and supplying us information patiently — hadn’t informed us of yet another advisory. The Indian High Commission in Singapore and Air India were prepared to transport those of us who had arrived from Kuala Lampur but did not step out of the airport. After that announcement, some 90 Indians pounded Changi’s richly carpeted floor in a rush to grab their boarding passes before our government changed its mind once again.

For the first 40 minutes that our aircraft sat, only half occupied on the tarmac, and when our fellow passengers failed to arrive, those few of us who had already boarded were concerned about yet another turnabout. Finally though, when the captain announced that “legal procedures” had been worked out by the high commission and the airline and the aircraft was filled to three-fourth capacity, that it became certain that we would be going back to a home just entering stage one of the frenzy Down Under.

Mumbai groom who stole phone arrested in his wedding procession

Harish Rawat has bounced back in Uttarakhand politics with lockdown protests, say experts, BJP calls it show off

CBSE results not releasing on July 11 and 13, board says notice fake

Harish Rawat has bounced back in Uttarakhand politics with lockdown protests, say experts, BJP calls it show off