Farmers alleged that against the requirement of 8-hour uninterrupted power supply, they have been getting just 4-5 hours of supply since paddy sowing started. 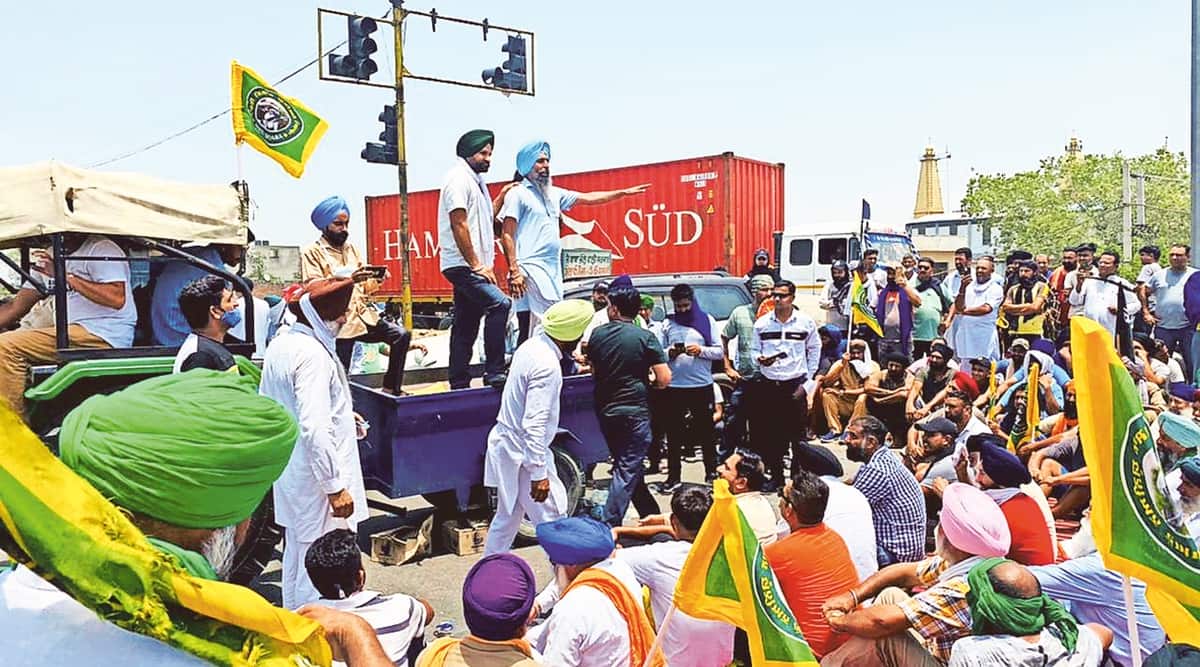 HUNDREDS OF farmers blocked the National Highway at Phagwara’s Sugar Mill Chowk for four hours over the issue of highly inadequate supply of the power for agricultural tubewells. Farmers alleged that against the requirement of 8-hour uninterrupted power supply, they have been getting just 4-5 hours of supply since paddy sowing started.

A separate group of farmers also gheraoed the Daulatpur power office near Phagwara.

In Kotkapura, farmer union workers locked gates of PSPCL’s office after which both sides exchanged heated arguments. PSPCL employees too staged a dharna against this treatment by protesting farmers. The dharna continued till late evening.

A PSPCL employee R P Singh: “We too are from farming background and we understand the problem of farmers. But locking our gates is not justified. We are not at fault. In case of any fault, despite being short staffed, we repair it at the earliest.”

In yet another incident in Gaunsgarh area of Ludhiana, PSPCL employees staged dharna against a local resident for allegedly abused a junior engineer on social media over erratic power supply.

Meanwhile, the protest in Phagwara led to traffic snarls across a long stretch of the Delhi-Amritsar highway.

At 11 am, farmers gathered at National Highway on their own and then BKU (Doaba) leaders joined them. The dharna continued for four hours till 3 pm and was lifted only after the assurance given by the district administration to meet their demand.

Satnam Singh Sahni, general secretary of BKU (Doaba), said that paddy transplantation has started from June 10 and since then inadequate power supply has become a big headache for farmers as their crop is either getting damaged in the absence of water, which is the main need of paddy crop, or getting delayed for transplanting.

“Today it’s June 29, and not on a single day have we got a proper power supply for 8-hour in our villages,” said Sahni, adding that the department is also helpless in the absence of staff and material.

“How many farmers can afford to run their tubewells on generators which consume 5-6 litres diesel (Rs 500 to Rs 600) per hour and running a generator for 4-5 five hours daily means an expenditure of Rs 2,000 to Rs 3,000, which will increase the input cost of paddy crop manifold,” said Sahni, adding that even we have to hire a man to protect the generator set in the fields and his salary is another cost to bear by farmers.

“We do not want to bother the general public in such hot summer but farmers see no other way out but to block the roads so as to wake up the government,” he added.

Sahni said that they may announce another big protest in coming days on the issue of ‘power supply’ if the situation does not improve as promised by the district authorities.

Meanwhile, commuters on the highway where the protest took place had a tough time bumper-to-bumper traffic was seen on both sides of the busiest National Highway. Many took congested routes through villages to bypass the traffic blockade.

Apart from this, Bathinda-Ludhiana state highway was blocked near Sudhar area of Ludhiana by farmers associated with BKU (Dakaunda).

Dharna continued for about five hours after which executive engineer of PSPCL came to the spot and gave assurance of 8 hours power supply to tubewells from Wednesday onwards.

Migrant labourers in Neemrana accuse contractor of assault, stopping them from going home

EXCLUSIVE! Ram Charan says the thought of the final output kept pushing him to build a toned body for Vinaya Vidheya Rama

3 years on, accident victim’s kin to get ₹12 lakh as compensation