After the incident, Mumbai Mayor Kishori Pednekar visited the patient and held a meeting with Rajawadi hospital staffers. 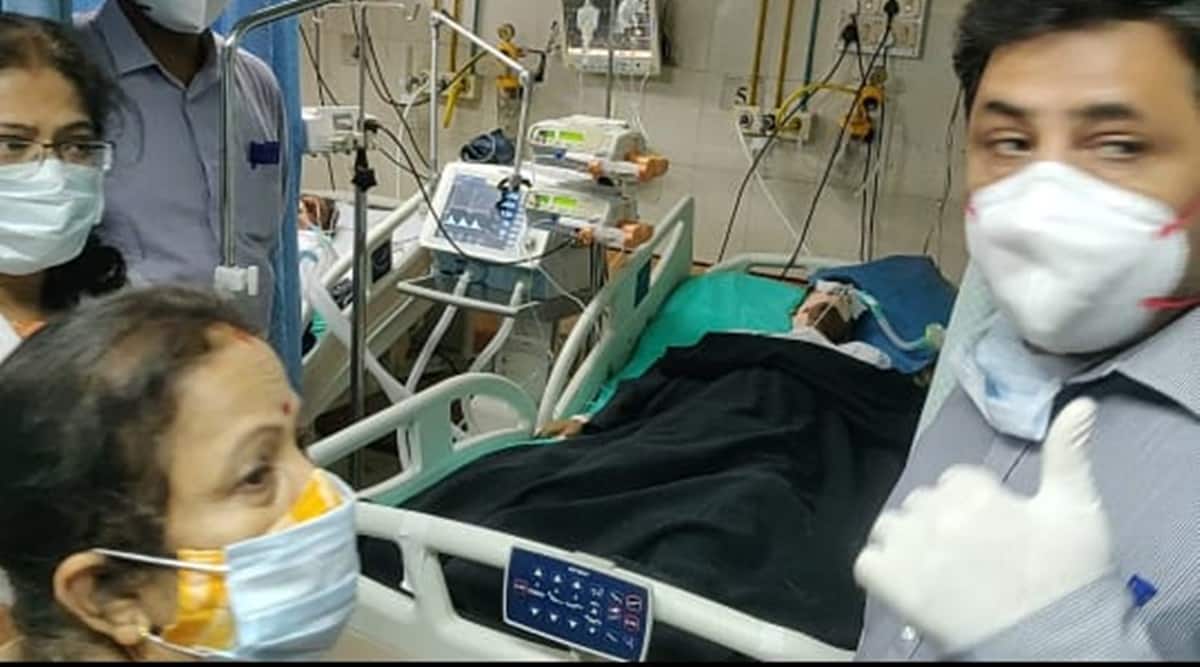 In a bizarre incident, a rat nibbled on the eye of a patient in the ICU of Mumbai’s Rajawadi hospital on Tuesday morning.

The patient, Shrinivas Nagesh Yallapa, was admitted Sunday in a serious condition and is on ventilator support. While the exact injury to his eye is not known yet, hospital superintendent Dr Vidya Thakur claimed there is no damage to his eyesight.

His sister, Yashoda Yallapa, showed pictures of the damage to his eye. Speaking to The Indian Express, Yallapa said, “On Tuesday, I found a bandage on his eye and saw blood underneath. This is a BMC-owned hospital. Where else can ordinary people like us go? The nurses say there are just two of them on duty and staff allocated for the ICU is insufficient. The security guards tried to drive me out after the incident.’’

This is not the first time such an incident has been reported in a civic-run hospital in Mumbai. In 2017, rats had nibbled on two patients at Shatabdi hospital in Kandivali.

A staffer of Rajawadi hospital said, “This hospital has been in a state of neglect for a long time. The superintendent has been asking for funds for repairs since the past five years. The emergency medical services wing here was built by late MP Gurudas Kamat in 2006 using his funds. Though Rajawadi is one of the biggest hospital in the eastern suburbs, the BMC has not been sanctioning enough funds.’’

After the incident — with BMC polls due next year — the Shiv Sena, which controls the civic body, had asked its functionaries to be present in large numbers around the hospital as they expected workers of their rival BJP to protest. However, no one from the BJP came to the spot Tuesday.

In the evening, Mayor Kishori Pednekar visited the patient in the ICU. Shiv Sena MLA Dilip Lande, who represents Saki Naka where the patient resides, also came to the hospital with his followers.

The Mayor held a meeting of Rajawadi hospital staffers in which Yashoda Yallapa also attended. After the meeting, Pednekar said, “The assistant commissioner of N ward, Ajitkumar Ambi, is here and has told us he will deploy a team of ratcatchers every night. These incidents must not happen.”

When asked why the BMC did not learn any lesson from the Kandivali incident, she said, “It will not be correct to say we didn’t take lessons. I saw the ICU and every corner is packed and the rat may have entered when someone opened the ICU door. But I can’t justify what has happened. I have instructed that all curtains must be folded at night so rats can be visible.’’

On the patient’s health status, Pednekar said, “His condition is serious and his haemoglobin level is just one. He is also an alcoholic.” An ICU staffer said Yallapa’s blood group is O-negative, and he has been administered a bottle of blood.

When questioned on Yashoda Yallapa’s claims of mistreatment by hospital staff and of the nurses complaining of being understaffed, Pednekar said, “This problem exists. At the same time, when the nurses take up the duty, they must own responsibility.’’

Another person whose relative is admitted in the ICU, P Shinde, said, “I have seen the rodents come from the bathroom.’’

Bigg Boss 13: After Arhaan Khan posts a birthday wish for Rashami Desai, fans warn him to stay away from her | Bollywood Life

Raashi Khanna plants a kiss to him