Chennai Margazhi Kutcheri December Music Season 2019: From ramps for senior citizens and persons with disabilities to police bandobast, Narada Gana Sabha has gone all out in ensuring that rasikas and artists will have a memorable experience this year. 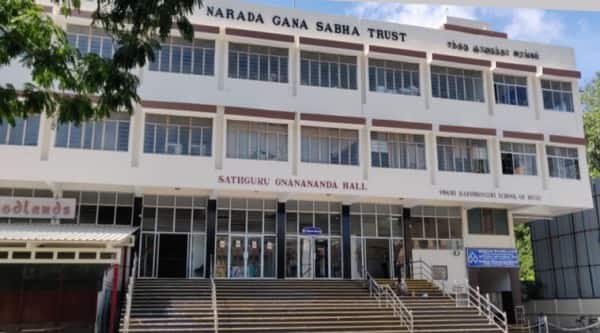 Come Margazhi season and rasikas (culture enthusiasts) in the city often gear up to spend their time in various sabhas (music institutions), where they make themselves at home as they immerse themselves in the various concerts hosted by the sabhas in Chennai.

READ | Margazhi Kutcheri Season 2019: Everything you need to know

The Narada Gana Sabha is one of the top sabhas in Chennai which plays host to several amateur and seasoned artists in the fields of Carnatic music, classical dance and instrumental music every year.

A big sabha which is tucked amid bustling Alwarpet, the Narada Gana Sabha is famous for its seating capacity and for encouraging young artists to carve a niche for themselves in the world of performing arts.

READ | Margazhi Kutcheri Season 2019: Top artistes to look out for

With prominent musicians set to perform here this Margazhi season, we take a look at some of the facilities that have been put in place at the Narada Gana Sabha to ensure that rasikas have a memorable time at the sabha this year.

Speaking to Indianexpress.com, K Hari Shankar, the secretary of Narada Gana Sabha said, “We have two auditoriums. One is the main hall which houses a big auditorium and the other is the mini hall, where we changed the seating and audio system during a three-month renovation earlier this year,” he said.

Hari Shankar said that preparations, from painting to setting up the canteen commence as early as October before the Margazhi season begins in December. “Gearing up infrastructure for water and sanitary facilities is going on and will be in place before the festival starts,” he said.

Season tickets for members and the public are sold in advance in October and November, while daily tickets can be purchased a day in advance for any concert from the sabha ticket counters.

Rasikas can avail food from the canteen which serves vegetarian delicacies for breakfast, lunch and dinner.

“We have ramps in the sabha which cater to the accessibility of senior citizens and persons with disabilities throughout the year”, said Hari Shankar.

“Apart from that, we have approached the assistant commissioner at Teynampet to send in police personnel for traffic management during the evenings,” Hari Shankar said.