Within decades of the British rule, 'Poona Camp' emerged as a suburb physically and culturally distinct from the old city, complete with residential areas, military establishments and bazaars By the time a 23-year-old business executive from a Burlington-based clothes and swords firm ‘Landon, Morland & Landon’ arrived in Pune on a business trip on May 8, 1851, it had already been 34 years since the city fell to the British forces. Thomas D Landon, who wrote a detailed memoir of his rendezvous with three British India provinces and spent weeks in Pune, described it as a ‘very large and ancient city’.

“Besides, Poona is the largest military station in the Bombay Presidency. Moreover, it is a very healthy spot, and is much resorted to in the monsoon or rainy season,” he wrote in the Narrative of a Journey Through India, published in 1857.

Soon after the British took control of Pune in 1817, a cantonment was established to the east of the existing city between two water streams – Manik Nullah and Bhairoba Nullah. In 1830, the Bombay Governor decided that he will spend the monsoon season in Pune and this led to his entire retinue shifting base to the city between June to October every year. This added to the city’s importance and also sped up the establishment of residential and governmental facilities in the cantonment areas. A distinct suburb soon emerged which had a western design aesthetic at its heart and was exclusively populated by white military and administrative staff in spacious bungalows resembling the European countryside. In the latter half of the 19th century, bazaars that catered to its military population and recreational centres such as clubs, race courses and gymkhanas also came up.

“It was where the ruling elite lived, and its exclusive nature was reinforced through segregation and emphasis on its separateness from the old city. To this extent, it was a planned settlement that symptomized dominance and political power, at one level. At another level, it can also be understood as a product of nostalgia, of the longing of a community in voluntary exile to recreate the ambience of their home in alien surroundings,” wrote Jaymala Diddee and Samita Gupta in ‘Pune: The Queen of the Deccan’ published in 2000.

“The people of the (old) city looked at it as a curiosity at first, as the ‘white camp’ (Gora Chhavani), …later the quiet, the spacious planning and the cleanliness of the Camp were admired, though from a distance, but not as a place they wished to live in,” they wrote.

The old city, which by the 1850s was home to about 1 lakh people, had a bustle of its own with residential and commercial Peths. The city had seen considerable emigration immediately after the fall of the Peshwas. In 1828, a fire gutted the interiors of the Shaniwar Wada fort and with it was lost some of the glory of the old city, the capital of the Maratha empire. 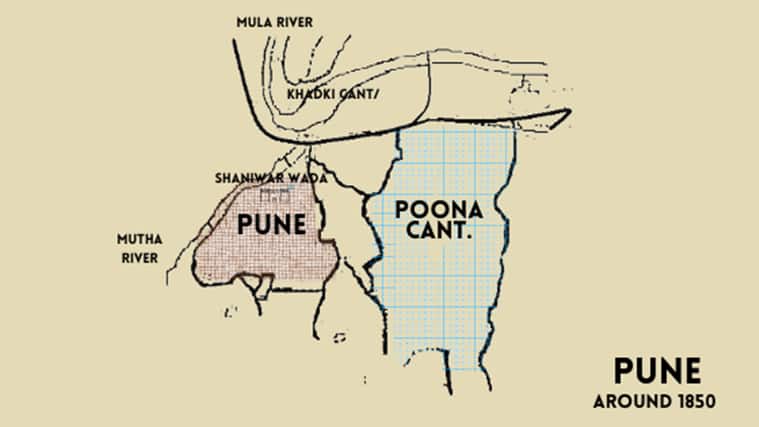 While considerable developmental work was carried out in the cantonment and the suburb populated by locals by the second half of the 19th century, the old city remained unchanged, wrapped in its past. The roads were muddy and dirty and it was a challenge for horses or bullock carts to pass through. The wadas, once the symbol of affluence, mostly lay in disrepair and in many cases were abandoned by the owners who chose to migrate. In official reports, British officers of the time describe an alarming state of sanitation in the city. This aspect came to the fore towards the end of the century, when the bubonic plague spread through the old city killing thousands.

“…there are two Poonas, almost as far removed from each other as the North and South poles,” wrote Reverend Father Elwin of Poona City Mission in the mission’s history ‘Thirty Four Years in Poona City’. “There is cantonment, or ‘camp’ as it’s commonly called, which has a large European population, and many bungalows, and gardens, and wide roads, and open spaces, and churches, and schools, and hotels, and long lines of barracks and hospitals. But there’s also the City, touching the Camp it is true, but to all intents and purposes far removed from it,” he wrote.

“Nevertheless, the sights and sounds as you travel through Poona City for the first time are so strange and varied that you need twenty pairs of eyes to take them all in,” wrote Father Elvin.

The two distinct settlements had started to merge even before Independence. By the beginning of the 20th century, wealthy Indians had started to build homes in the cantonment areas and started to cohabit the previously ‘exclusively white’ settlement. Developments such as the arrival of the railway station, setting up of the municipality and then the corporation, increased migration to the city as an educational hub and, finally, the Indian freedom from British occupation, homogenised the city as it readied itself to play a new role as an industrial metropolis.

‘Centre should bear burden of incentives to MSMEs’