The government order, issued earlier this month, said manufacturers and suppliers could provide oxygen only to hospitals and not to individuals. As Karnataka continues to grapple with oxygen shortage amid the second wave of Covid-19, a government order mandating that manufacturers and suppliers provide oxygen only to hospitals and not to individuals has compounded problems for those in home isolation.

The government order was issued earlier this month. Among many hit by it was Gagandeep S, whose father was discharged from a private hospital in Bengaluru last week and was recommended oxygen support at home for at least a fortnight.

“As I was informed about my father’s discharge at the eleventh hour, we had to quickly make arrangements at home. I reached out to the supplier my neighbour had contacted earlier in April, but he told me he was barred from providing me with oxygen. I contacted several leads I found online and everyone said the same.”

Gagandeep then requested the hospital authorities to extend admission time for his father, but was told other patients were in queue already. “My neighbour’s friend somehow arranged for a cylinder and an auto driver helped me with the refill the next day, after I furnished the doctor’s prescription. I am now in touch with an NGO that helps me with the refill,” he said.

“Finding a bed in another hospital only for the availability of medical oxygen is a challenge. But getting cylinders refilled from Peenya, Jigani Industrial Area, or Dabaspet has become another hurdle for many,” Gagandeep added.

NGOs say while some cylinder manufacturers and suppliers agree to provide oxygen when showed a medical prescription, the government order in effect disallows this, and so they are reaching out to families with half-used or empty cylinders.

Several voluntary groups are collaborating with each other to ensure medical oxygen to the needy in home isolation. One such initiative is ‘Pass the Oxygen’, operated primarily by three friends — Freeda Lazar, Arshiya Sayed, and Jayanth Nagraj.

The trio is asking people to donate used and half-used cylinders to ensure they are refilled and passed on to someone else in need. “With a database of cylinders and users being updated frequently, we have been able to help several families get oxygen at home since the beginning of this month,” Lazar, who is an indepedent baker and designer, said.

While the group collects a refundable deposit (nearly Rs 10,000) from those who can afford to pay, they also seek donations to help the financially strained.

In a bid to attract more donors, the team has started naming oxygen cylinders after those who make significant contributions. “People were not willing to donate cylinders or concentrators as they have become priced commodities given the situation. However, we found people ready to donate either after they were done with the cylinders, or after their loved ones succumbed to the infection. One such donor was Mayura, who passed on the cylinder to us in the memory of her dad, Prabhakar,” Lazar said. 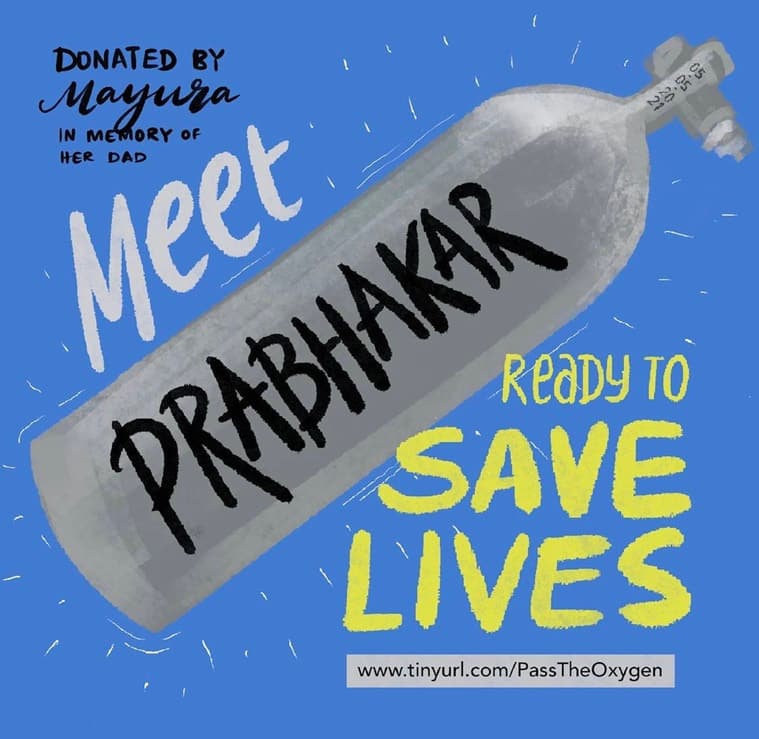 From an eight-year-old in Shantinagar recovering from the infection to a patient with a single lung, such cylinders have travelled across the city to different homes. For instance, another cylinder, ‘Vijayalakshmi’, has travelled from Sundaranagar to Frazer Town to Malleshwaram in the past few days. “Our learning so far has been that it is better to allow a single patient in dire need of a cylinder to use it for 10 days than to ensure the same is passed on to 10 different people in quick succession,” Lazar said.

Volunteers of Cov-aid Bengaluru, a citizens’ group, helps manage the groundwork with the help of autorickshaw drivers. Cov-aid has also made user manuals to help patients’ kin set up and use oxygen cylinders at home. 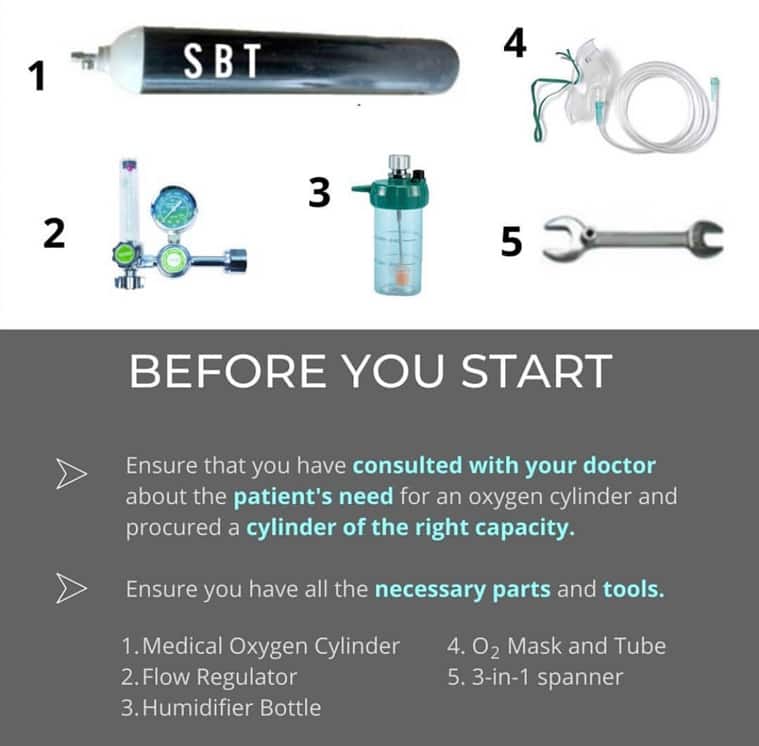 A volunteer from the Emergency Response Team (ERT) set up by various NGOs and individuals said instead of barring supply to individuals, the government could have set up a price cap to prevent black-marketing. “Halting supply is not the way to prevent overcharging. Instead, a price cap can be set. This way, the government is burdening itself more, as more people are trying to seek hospital admission only for oxygen supply.”

However, Industries Minister Jagadish Shettar, who is also in charge of oxygen supply in Karnataka, told Indianexpress.com that the guidelines were revised in a bid to ensure sufficient supply of medical oxygen to hospitals.

When pointed out that individuals at home and NGOs working for people were facing challenges due to this rule, Shettar clarified, “Each volunteer and NGO working in the sector is undoubtedly working with goodwill. However, district administrations have been directed to advise them to try and set up oxygen generators to get independent supply for now.” The situation is getting better as more efforts to ramp up supply are being made on a daily basis, he added.

A senior government official said the rule had curbed hoarding and black marketing. “In case a patient in home isolation is in serious need of oxygen, they are advised to get admitted to a hospital,” he added.

The order dated May 9 mentioned it was important to “keep an inventory of healthcare resources and use them judiciously” in the second Covid-19 wave. It said, “… there is a need to have efficient, transparent and comprehensive guidelines for management and distribution of the Medical Oxygen at all levels and until the last mile.”

Navjot Singh Sidhu launches Amritsar BRTS, says wants to give it a chance to succeed

Shoaib Malik to lead Pakistan in ODI series against Australia