Karnataka Bangalore Latest News Live Updates: Karnataka reported 1,298 new COVID-19 cases and 32 deaths on Tuesday, taking the total number of infections to 29,31,827 and the toll to 37,039. 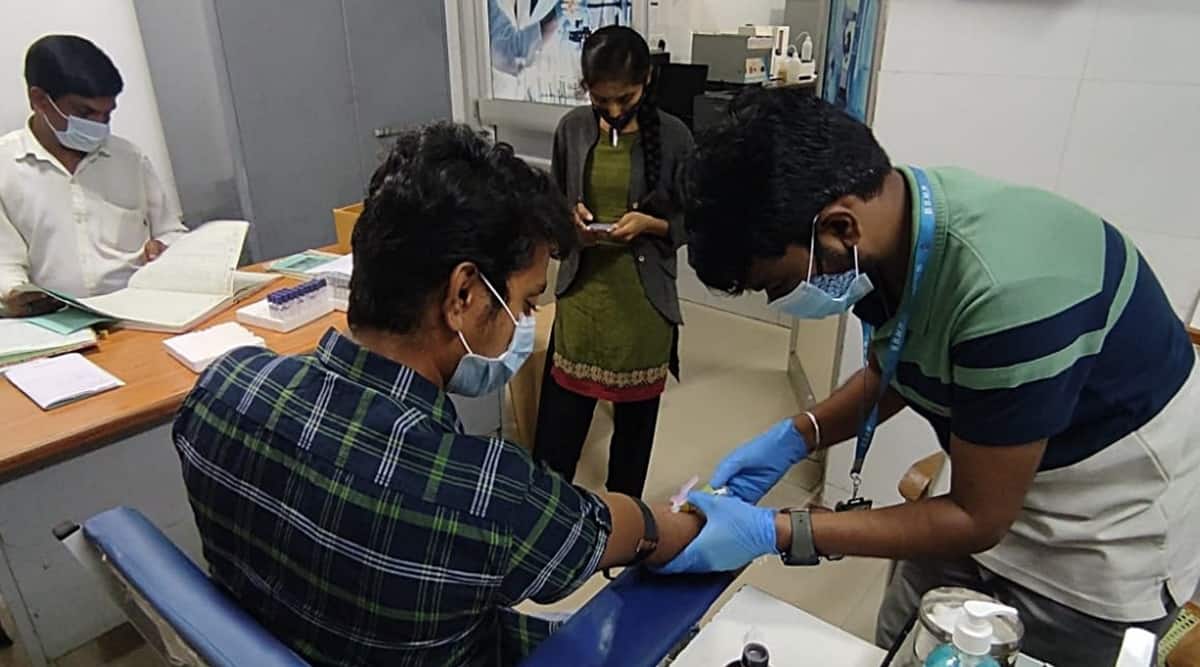 Karnataka Bangalore News Live Updates: The Karnataka government has decided to test 1.5 crore children in the state for Covid-19 ahead of an anticipated third wave of the pandemic. According to Health and Medical Education Minister K Sudhakar, the ‘Arogya Nandana’ initiative will be launched by Chief Minister Basavaraj Bommai within a week.

“While over 1.5 crore children in the state will be subjected to Covid tests, this will help us identify children with low immunity and other co-morbidities. They will then be provided with nutritious food and supplements to boost their immunity and their health will be constantly monitored,” Sudhakar said.

Catch the latest news in Bengaluru and Karnataka as we bring you live updates on the political developments in the state.

Karnataka Revenue Minister R Ashoka on Tuesday said water logging areas in Bengaluru have been identified and will be fixed soon. “I have instructed the officials to construct shoulder drains wherever necessary so that we can prevent water logging on Bengaluru streets,” Ashoka said.

Noting that many roads witness traffic jams during rains due to waterlogging, he said it has been decided to remove all such bottlenecks so that the water flows into the drain and there is no water logging. “We will not tolerate any sub-standard work. I recently inspected Commercial Street and ordered the contractor to relay the tiles. The road will get a new look within two months. I have asked officials to regularly inspect the works and take action against sub-standard works,” he added.

The Minister further warned that if any official is found to be negligent, action will take action against the erring official. (PTI)

The Mangalore Refinery and Petrochemicals Limited (MRPL) has cautioned the general public against falling prey to unscrupulous elements who are offering employment in the company by charging money.

In a statement, MRPL said some unscrupulous elements are found to be cheating members of general public by taking money for employment and contract employment in the refinery premises. It is reported that these elements are using MRPL’s duplicate letter heads and work passes to commit the fraud, the statement said, adding the company has already initiated appropriate legal action against this.

MRPL never charges any money for appointments for permanent or contract jobs and the company has not nominated any broker or agent for the purpose, the statement from Rudolph V J Noronha, general manager (corporate communications), said.

Being a CPSE organisation, it has a transparent system for recruiting staff and system does not allow any scope for malpractice. The company recruits candidates by notifying the vacancies appropriately and by widely advertising the vacancies in leading national dailies, employment news and also by hosting the same on company websites, the statement said. (PTI)

Bengaluru Urban accounted for most of the fresh cases (340), as the city saw 471 discharges and 10 deaths. The total number of active cases in the state is at 21,481. While the positivity rate for the day stood at 1.01 per cent, the Case Fatality Rate (CFR) was 2.46 per cent.

Four people were arrested on Tuesday with 20 kg of banned ambergris or floating gold worth Rs 20 crore, police said.

Acting on a tip-off, the SJ Park police arrested two people with 2.5 kg of ambergris. Further interrogation revealed that there were two more members of the gang. Based on their input, police raided their house in Hoskote town adjoining Bengaluru and seized 17.5 kg of ambergris.

The accused are reportedly residents of Udupi who had got the ambergris from Malpe beach. (PTI)

Harish Bangera, 32, who was arrested in Saudi Arabia over alleged hate posts on social media has been released and returned to India.

Bangera, a resident of Goyadibettu in Bijadi village of Kundapur taluk, Udupi district, was an air-conditioning technician for a company in Dammam, capital of Saudi’s eastern provice. He was arrested on December 20, 2019 for allegedly posting derogatory messages on Facebook against Saudi Arabia’s crown prince Mohammad bin Salman and a community.

In an ongoing drive, the Karnataka government has been able to reclaim 141 acres of land illegally occupied by encroachers around 58 lakes in Bengaluru.

The tehsildars of all the taluks were directed to undertake the eviction drives every Saturday.

The party has written to the Bengaluru police commissioner Kamal Pant alleging that the owner of a building has been threatened for renting out his premises for establishing an AAP office in Mahadevapura, which is Limbavali’s constituency.

Investigation into the death of a dog which was shot led to the seizure of a massive load of explosives in Karnataka’s Dakshina Kannada district Monday. Police seized 1,400 kg of explosive substances stored illegally inside a building in Mangaluru city.

The accused, Anand Gatty (50), was arrested and produced before a court which remanded him in police custody. Police have recovered 400 kg of white sulphur powder, 350 kg of potassium nitrate, 50 kg of barium nitrate, 395 kg of potassium chlorite, 260 kg of aluminium powder of different grades, 161 boxes of 100 air pistol pellets each (.22 bore), 30 kg of lead balls and 240 kg of charcoal from the spot.

The Karnataka government has decided to test 1.5 crore children in the state for Covid-19 ahead of an anticipated third wave of the pandemic. According to Health and Medical Education Minister K Sudhakar, the ‘Arogya Nandana’ initiative will be launched by Chief Minister Basavaraj Bommai within a week.

“While over 1.5 crore children in the state will be subjected to Covid tests, this will help us identify children with low immunity and other co-morbidities. They will then be provided with nutritious food and supplements to boost their immunity and their health will be constantly monitored,” Sudhakar said.

While internet and connectivity remained in place allowing students to communicate with their families back in Afghanistan, there is concern that things could change once the Taliban gain complete control at the local level.

According to the sources in the Karnataka police department, there are 339 Afghanistan nationals who are legally living in Karnataka. Of them, 202 are residing in Bengaluru. As many as 192 Afghan nationals are on student visas.

Afghan nationals whose visas have expired or is about to expire are expressing their concern. There is no official communication from the Foreigners Regional Registration Office (FRRO) or Ministry of External Affairs on visa validity, a student said.

With the Karnataka government and the Department of Higher Education (DHE) progressing actions required to begin implementing new National Educational Policy (NEP) from the upcoming academic year in colleges, Chief Minister Basavaraj Bommai dubbed the same as a “necessary move in the realm of education.”

Bommai, after reviewing the progress with DHE officials said it was also necessary to
begin technical educational institutions across all districts in a bid to ensure employment to the youth.

He also noted that the implementation of the new policy should take place by ensuring all the prominent educational institutions in the state are taken into confidence. It was also suggested that the syllabus of B.Ed and D.Ed courses should be revised to be in tune with the provisions of the NEP as well.

The Karnataka Common Entrance Test (KCET) will be held on August 28 and 29, the Karnataka Examinations Authority (KEA) confirmed while hosting admission tickets for candidates on its official portal.

As per an official notification, candidates can download the admission ticket by selecting the link on the KEA website (kea.kar.nic.in). Candidates have been urged to download instructions and to follow akk guidelines/procedures mentioned compulsorily.

Earlier, the government announced that admission to undergraduate professional courses including medical, engineering, technology, yoga and naturopathy, farm science, and pharma courses would be based on ranks considering the scores secured by students attending the KCET, and not based on second-year pre-university exam grades or marks.

Despite attaining authorisation from the Commissioner of Metro Rail Safety (CMRS) to begin commercial operations on the extended Purple Line of Namma Metro in Bengaluru, the same is expected to be further delayed before being open to commuters.

According to a senior official at the Bangalore Metro Rail Corporation Limited (BMRCL), the government had initially planned to complete the inauguration on the day of Varamahalakshmi festival (August 20 this year), considered to be auspicious.

“We have been consulting ministers of both the Centre and the State to arrive at a date for inauguration. However, it looks highly unlikely that we can launch operations on Varamahalshmi Day as it is difficult to get dates of leaders at both levels together in such a short notice,” the official said. However, a date is expected to be announced in the coming days.

Karnataka Chief Minister Basavaraj Bommai, who reviewed the works undertaken by the PWD department Tuesday instructed the officials to take up the restoration work of roads damaged by recent rains on priority.

Pointing out that Rs 300 crore has been released for restoration of roads damaged due to rains, the CM asked officials to utilise the funds for the region affected by rains. (PTI)

Noting that the government is taking measures to alert people about possible lightning strikes, Revenue Minister R Ashoka said, “every year, many people die due to lightning, hence, we are introducing a lightning alert system at select villages. This project has been taken up with help from the Central Government.” These warning systems will be installed at select gram panchayats and will be connected with the weather office in Bengaluru, he said.

Further stating that the government will be introducing a cyclone warning system in coastal areas, Ashoka said, sirens will be sounded which can be heard up to six km. “Currently, we are planning to install this at 40 places in coastal areas and soon plan to extend it to 60 places. Each centre costs Rs 10 to Rs 12 crore with funding from the central government. This will be especially helpful to warn fishermen and those staying in coastal areas,” he added. (PTI)

Karnataka has officially declared 83 taluks in the state  as “flood hit”, Revenue Minister R Ashoka said on Tuesday.”Earlier, we had declared 61 taluks as flood affected. However, following recent rainfall and flood situation, we have added 22 taluks to the list,” Ashoka said.

“With the latest addition, there are 83 taluks in Karnataka which are declared as flood hit.”

Good morning Bengaluru!
Welcome to the live blog from Bengaluru where we bring to you the latest updates on Basavaraj Bommai, Karnataka politics, Covid-19, BBMP and more across Bengaluru and Karnataka. Follow the blog and @IEBengaluru to stay up to date with the state in real time.

Despite attaining authorisation from the Commissioner of Metro Rail Safety (CMRS) to begin commercial operations on the extended Purple Line of Namma Metro in Bengaluru, the same is expected to be further delayed before being open to commuters.

Here are a few contacts that might come in handy for you in emergency situations:

Rise of a cleric: how did Khadim Rizvi become so influential in Pakistan?

Beyhadh 2 promo: Jennifer Winget’s sizzling performance as Maya will make you fall for her once again | Bollywood Life