🔴 Built between 1803 and 1808, this building was not only the seat of the East India Company’s resident in the Nizam's court but also a power center that at times overshadowed the authority of successive monarchs. Come January, the British Residency building in Hyderabad, a palatial mansion that introduced the European style of architecture to the region in the early 19th century and one of the most important heritage structures of the city, will come full circle. The launch of an in-house interpretation center will complete the building’s conservation process for the future though visitors will have to wait for a few more months before the campus is thrown open to the public.

Built between 1803 and 1808, this building was not only the seat of the East India Company’s resident in the Nizam’s court but also a power center that at times overshadowed the authority of successive monarchs. 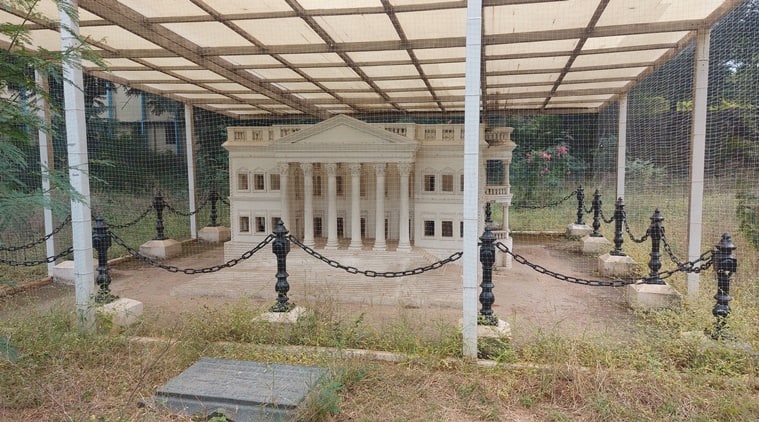 The Residency, that provided for a permanent station and full-fledged military base for the British in the princely state of Hyderabad, was also the result of the treaty of Subsidiary Alliance that the second Nizam, Mir Nizam Ali Khan, Asaf Jah II, signed with the British East India Company in 1798.

Post-independence, the historic monument became the Osmania University College for Women (OUCW) until it was shut for restoration in the early 2000s. Now a protected monument notified by the State Department of Heritage, the building also features as the backdrop in Scottish historian William Dalrymple’s famous book White Mughals: Love and Betrayal in Eighteenth-Century India, a story of the love affair between the British Resident James Achilles Kirkpatrick and Khair-un-Nissa Begum, a Muslim noblewoman whom he married. It was Kirkpatrick who, while serving as the 6th Resident to Hyderabad between 1798 and 1805, commissioned and oversaw the building’s construction.

At present, a small team of workers is finishing up the last coats of limewash and working on sundry utility services. Once inaugurated in January, the building will have an interpretation center while the OUCW will retain a few rooms for accommodating the offices of the Principal, Vice Principal, and a meeting hall. History that shaped politics of the Deccan

The building, designed by Lieutenant Samuel Russell of the Madras Engineers, took six years to build under the supervision of Kirkpatrick and Raja Mudaliar. It was following the treaty of Subsidiary Alliance in 1798, says Professor Salma Ahmed Farooqui of HK Sherwani Centre for Deccan Studies at the Maulana Azad National Urdu University (MANUU), that the land and garden-house of Nawab Shamsher Jung were handed over to the British by the second Nizam for construction of a permanent residency for the British diplomat.

“After signing the treaty, the British gained a political foothold in the princely state of Hyderabad. A cantonment, the largest in the country then, was established at Secunderabad and British troops were stationed permanently. Also, the Nizam ceded the fertile eastern coastal areas of Northern Circars to the British,” adds Professor Farooqui who is also Director (India office), Association for the Study of Persianate Societies.

The Residents, beyond being diplomats, were quite popular in Hyderabadi social circles, she says. They adopted the local culture, dressed like Nawabs, attended social gatherings, were used to pan and hookah, and spoke in Persian and later Urdu. It was also a time when the influence of the European lifestyle and English as a language was immense among the nobles. “Kirkpatrick was so popular that he was bestowed the title of Hashmat Jung by the Nizam. He was also called Farzand-e-Dilpasand, meaning the favourite son. The bazaar areas near the residency – Hashmat Gunj and Russell Gunj, were named after British Residents,” she adds. However, along with their popularity rose their grip over the monarchs. Quoting a book, Nizam-British Relations 1724-1857 by academic Sarojini Regani, Prof Farooqui says the Nizam had chosen the colonial agents owing to the threats his kingdom faced from the Maratha rulers and Tipu Sultan of Mysore. It was also during the reign of the second Nizam that Asaf Jah rulers moved the capital of the region back to Hyderabad from Aurangabad. Previously, Hyderabad had been the capital of the Qutb Shahi dynasty between 1591 and 1687, till Mughal emperor Aurangazeb conquered Golconda and shifted the capital to Aurangabad. While the first Nizam, Mir Qamar-ud-din Khan, Asaf Jah I, declared independence from the Mughals in 1724, it was only in 1763 that the capital was moved back to Hyderabad from Aurangabad.

During the reigns of successive Nizams, the power and influence of the British Residents solidified further, she says, such that even the Prime Minister of the state was the choice of the British who had a lot of say in all matters. “Mir Farqunda Ali Khan, the fourth Nizam, was bestowed the title Yar-o-Wafadar (faithful ally) by the British. Though the Nizam was the overall ruler, his autonomy did not remain the way it would have had he not signed the subsidiary alliance treaty,” says Prof Farooqui. A conservation project that took 15 years to take off

While the conservation and restoration works began only in 2015, it was in the early 2000s that the then college principal Pramada Devi along with heritage conservation architect Vasanta Shobha Turaga explored ways of preserving the building for the future from structural disintegration. In 2002 and 2004, the building was listed as a heritage building in distress on the World Monuments Watch programme by the World Monuments Fund, New York.

The college readied a conservation management plan in collaboration with the WMF in 2010. A Project Implementation Committee, comprising OU, Department of Heritage, National Culture Fund, and the WMF, then came together to raise funds and the works began in 2015. Around Rs 13 crore of the total project cost Rs 17 crore has been spent on restoration so far and donations are still being raised, said a member of the Project Team. To begin with, the scale model of the Residency building that was destroyed in 1978 when a tree branch fell on it was restored. The Doll House, a tradition in English mansions, located at Rang Mahal gardens, was redone with assistance from Deccan Heritage Foundation, London. The adjoining cemetery was restored with support from British Association for Christian Cemeteries in South India (BASCA)

Given the size of the building and multiple layers attached to the history, the conservation project was challenging, the conservation team led by Chief Consultant Conservation Architects GN Heritage Matters and restorer, Jeernodhar Conservators maintained. The works were taken up in six phases based on the priority of conservation needs and availability of the funds. “The first task to address was a threat to the structural integrity of the building. The ceiling of the western oval (ball) room had disintegrated. It had to be brought down and redone again.” Also, the wooden beams were damaged due to water seepage. “To procure a huge 30-feet long single piece of teak wood to redo an entire beam was also a challenge.” At the time of commencing works, only eight ceiling fans in the Darbar hall, three chandeliers, and 12 tall mirrors were present from the British era, apart from original doors and windows made of Burmese teak wood. The conservation team believes that the building, though one of the finest examples of Palladian architecture, was not designed by an architect.

“While we had some literature and images for reference, the building started to reveal layers of history by itself. It is because they went on refurbishing the building as and when new Residents took over. The designs, probably taken from pattern books, were translated into the building by Indian craftsmen. The oval ballrooms were originally not oval but a rectangle. The circular staircase was not present.” The building has, apart from the Darbar Hall, seven rooms on the ground floor and nine rooms on the first in addition to a basement (originally designed to be the ground floor). Though the classical façade on the northern side with massive columns, marble stairs, and two lions as guards on either side, makes for a rich portico, the original entrance to the building was through the basement on the southern side with a circular portico that faced the Old city beyond river Musi. The conservation team added: “For long, we thought the dome was masonry but when we examined it we found that there was a wooden frame inside. The revealing of historical layers happened even after four years. Once when we opened a wall, we found a wooden staircase behind it.”

Another unique feature of the building is the paper mache ceiling of the Darbar hall, probably the only one of its kind remaining in India. This was almost 60 per cent damaged and the restoration of this alone took a couple of years. Each challenge led to a change in course of decision-making for a suitable conservation intervention keeping the future of the building in mind, the team said. More work left to be done

Along with the 150 years of colonial history and its influence on the region, on display at the interpretation centre would also be the role of OUCW in women’s education in the state during the seven decades post-Independence.

Conservation architect Anuradha Naik, who will curate the centre, says the concept is to disseminate information about the building, its history, and the politics in Deccan at the time, the conservation project, etc using archival footage, photographs, and old maps.

According to OUCW Principal Vijjaltha Manga, the building and the centre are scheduled for inauguration in January. “But we have to restore the Rang Mahal gate, side wings, and gardens, too. It will take a few more months. HMDA has expressed willingness to support the restoration of side wings while Pleach India Foundation has offered to restore the Rang Mahal gate and gardens,” says the Principal.

Naik is currently authoring a book on the life and story of the British Residency. “The building in itself is the jewel that we have,” she says.

‘Plan to encourage tribal farmers to opt for commercial crops’

Points of contention in surrogacy bill