The 86-year-old Chautala accompanied by his grandson Karan Chautala, lawyers and party workers reached Tihar in the morning to complete formalities. 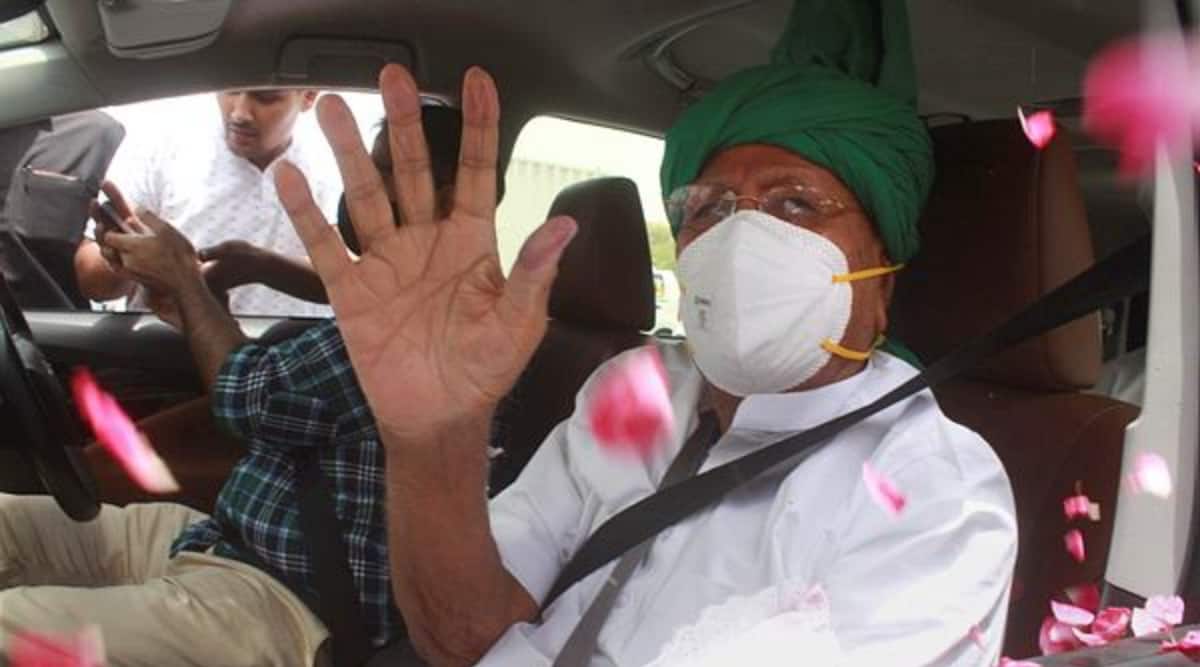 Former Haryana chief minister Om Prakash Chautala, who was serving a 10-year prison term in a teacher recruitment scam case, was released from New Delhi’s Tihar jail Friday. Later, Chautala, who is also the chief of the Indian National Lok Dal, announced that he will soon begin a tour covering all the villages in Haryana.

The 86-year-old Chautala accompanied by his grandson Karan Chautala, lawyers and party workers reached Tihar in the morning to complete formalities.

Chautala was jailed in 2013 in a teacher recruitment scam case. He was on emergency parole since March 26, 2020, due to the Covid pandemic and was scheduled to surrender on February 21, 2021. However, his parole had been extended by the high court, a senior jail official had said earlier.

He was released prematurely after the Delhi government, last month, passed an order granting a six-month special remission to those who have served nine-and-half years of their 10-year prison sentence. Since the INLD supremo has already served nine years and nine months of his sentence, he was eligible for release.

Soon after his formal release, Chautala reached his Gurgaon residence where he was welcomed by party workers. He also addressed the gathering at his residence and announced his plan to tour the Haryana villages.

The INLD is currently facing a crisis and has been relegated to the sidelines in Haryana’s politics especially after the party suffered a rout in the 2019 Assembly polls. Prior to the Assembly polls, the INLD was split vertically with the Chautala’s two sons, Abhay and Ajay, parting ways. Ajay, his wife Naina and sons Dushyant and Digvijay formed a new political outfit, Jannayak janta Party (JJP) and eventually entered into a post-poll alliance with BJP after the 2019 Assembly polls.

With 10 MLAs, Dushyant is currently the deputy chief minister. On the other hand, INLD failed to make any mark with Abhay being the lone party candidate who could make it to the Vidhan Sabha. However, Abhay too, recently resigned from the Assembly in solidarity with the ongoing farmers’ agitation against the three central farm legislations.

Chautala, his son Ajay and 53 others including the whistleblower IAS officer Sanjiv Kumar were convicted and sentenced in the case pertaining to recruitment of 3,206 Junior Basic Training teachers in 2000. They all were sentenced to varying jail terms in the case by a special CBI court in January 2013. Kumar, the then Director of Primary Education in Haryana, had initially exposed the scam after he filed a plea in the Supreme Court. Later, he was also found to be involved in the scam during a CBI probe. Chautala’s former Officer on Special Duty Vidya Dhar and political advisor to the then Haryana CM Sher Singh Badshami were also given 10-year jail terms.

The others who were given 10-year jail terms are Madan Lal Kalra, Durga Dutt Pradhan, Bani Singh, Ram Singh and Daya Saini. Apart from them, one convict was handed a five-year jail sentence and the rest 44 were given four years of imprisonment.

Maharashtra: In run-up to civic polls, infra projects lined up for completion

Dhanwantari Homam to be held in Tirupati

Case of murder lodged against district collector in Odisha