Taking the farmers’ issues from ground zero to the online space and becoming their voice on social media, some Twitter handles started by young activists from different professions and backgrounds played a crucial role in making the farmers’ agitation against the three farm laws an ‘international’ issue.

On Friday, when Prime Minister Narendra Modi announced to repeal the three farm laws, it also came as a victory for those protesters on Twitter who continued their support for farmers despite ‘account suspensions’ following gag orders from the government.

One such interesting Twitter handle that managed to keep its hashtags trending throughout the agitation was ‘Tractor 2 Twitter’ (@Tractor2twitr), managed by a group of 8-10 professionals from different states, along with Facebook and Instagram accounts with the same name. Twice throughout the agitation, the Twitter account of ‘Tractor 2 Twitter’ was suspended by Twitter following recommendation from the Union government to ban “farm agitation related provocative accounts” and till date, when Modi announced the repeal of the three farm laws, this account remains under ‘shadow ban’ making it difficult for Twitter users to search the handle and add new followers.

An IT professional from Australia to a dentist from Ludhiana and an agricultural entrepreneur from Mansa among its founders — ‘Tractor 2 Twitter’ was a completely “unplanned” initiative that just grew as common people started connecting with the farmers’ cause.

“The farmer agitation at the borders of Delhi had just started in November last year when we were just discussing how to make their voices reach the common people who are not from the farming background. We just wanted farmers to express themselves on social media and they should reach from the fields to online space. But the question was how to take farmers to social media? And that’s when ‘Tractor 2 Twitter’ came to our mind as the most attractive name for a Twitter handle which went viral in no time. We used to release two hashtags every morning and soon they started trending on a daily basis. We countered propaganda by TV channels and rumours/fake news which was spread about the protesting farmers without using derogatory words,” says Amandeep Singh Bains, a dentist from Ludhiana, and a core team member of ‘Tractor 2 Twitter’. “Those who supported farmers were called terrorists, Khalistanis and what not, so we just wanted to give an online platform to farmers to say their side of the story,” he added.

“Once, our account was suspended but restored within a day after we submitted a written explanation to Twitter explaining that we were just supporting farmers and not promoting any anti-national or provocative content. It was suspended again and till now it remains under a ‘shadow ban’ making it difficult for new users to search and follow us. But we will continue to support farmers and make their voice reach Twitter because in current times, it is the most powerful online medium and it is only because of our Twitter push that this agitation reached the United Nations,” says Bhupinder Singh, an agricultural entrepreneur from Mansa. 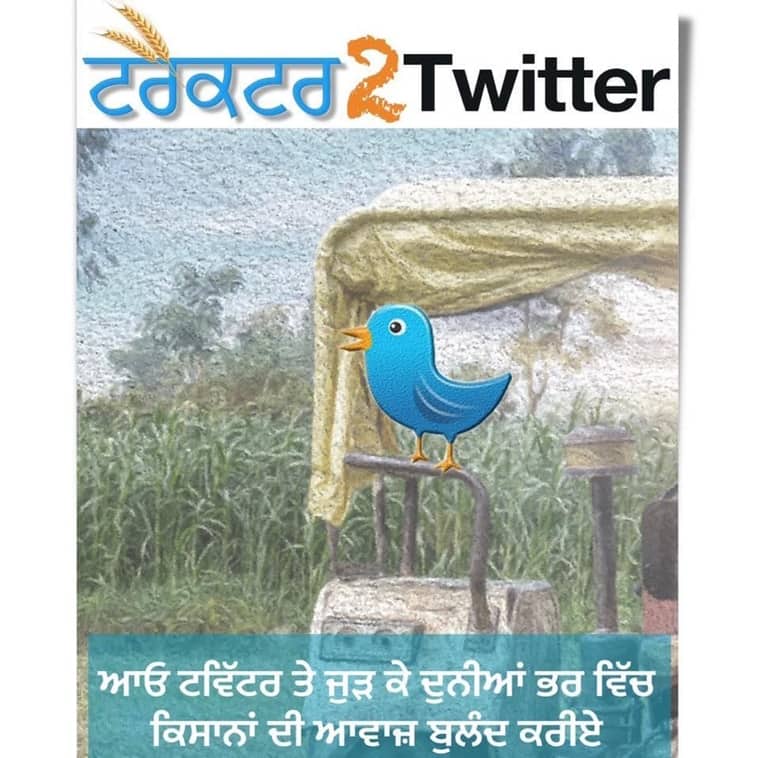 Some of the hashtags that trended on Twitter include ‘#Take_Back_Farm_Laws’, ‘#UN_Save IndianFarmers’, ‘#Biden_SpeakUp4Farmers’ among others. The team also planted some saplings at Singhu border as ‘Morche di nishaani’ (a symbol in the memory of protest).

@Kisanektamorcha with 438.6k followers, @TikriUpdates and @trolleytimes are among several other Twitter handles that made the farmers’ agitation reach the online space, which otherwise was inaccessible for farmers.

The movement also gave birth to probably the first weekly publication of modern times born from an agitation focusing only on farmers and agriculture related issues.

‘Trolley Times’ is a weekly newsletter which was born during the farmers’ agitation and “is brought out by like-minded people-writers, activists and artists, in the support of Kisan Morcha”. A publication that gave a chance to farmers to pen their issues and views, its printed copies were also distributed at the protest sites. It’s tagline reads: ‘Voice of Kisan Protest 2020’.

‘I most definitely found myself in books’