At the protest site in Tikunia, Lovepreet’s sister, Gagandeep, was inconsolable. “He was our only brother,” she said. Lovepreet is survived by his farmer parents, and two sisters. 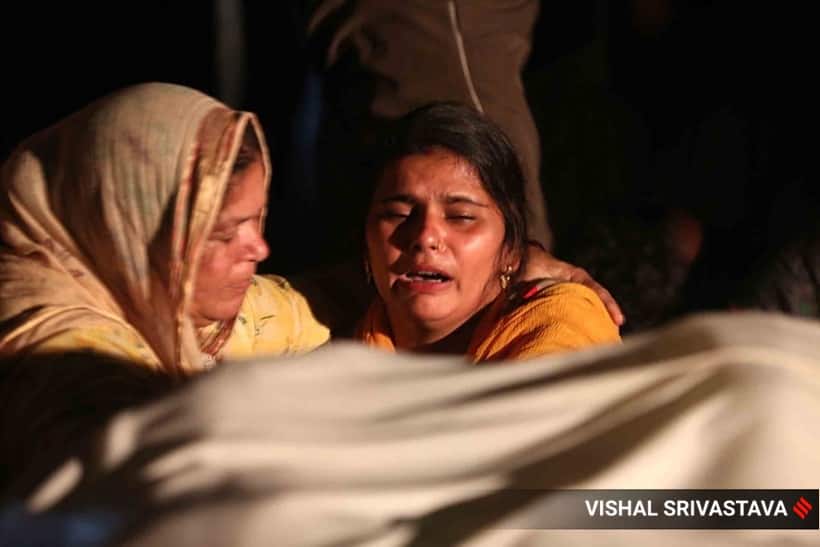 BESIDES THE four farm protesters who were killed in Lakhimpur Kheri after being hit by a convoy of cars, including one owned by Union MoS Ajay Mishra, among the four others who died in clashes on Sunday were two local BJP leaders, a journalist and a driver employed by Mishra’s son, Ashish Mishra.

“Gurvinder had completed his Class X and was looking to get work as a labourer in Qatar. All his dreams are gone with him,” said his uncle, Naskeen Singh.

Gurvinder is survived by his parents, brother Gursevak (22) and sister Rajni (20). “He had said that he was going for a good cause, and even if he died, it would be for a good cause. We didn’t pay head… who knew this would happen,” said Naskeen.

At the protest site in Tikunia, Lovepreet’s sister, Gagandeep, was inconsolable. “He was our only brother,” she said. Lovepreet is survived by his farmer parents, and two sisters.

Nachhattar’s son, Mandeep (30), said he was in Almora for his Sashastra Seema Bal (SSB) training, when he heard about his father’s death. “I don’t know what happened. We hope for justice,” he said. Nachhattar is survived by his wife, Jaswant, Mandeep, daughters Amandeep (20) and Sarabjit (22).

“He had gone for the protest for the first time and said he would be back by evening,” said Jaswant.

Diljeet’s cousin, Sher Singh, said the dead farmer had left behind two teenaged sons, Parmit Kaur (16) and Rajdeep Singh (14). “One of his sons had also gone for the protest with him. He is injured and undergoing treatment,” said Sher Singh.

“Diljeet used to go for the farmer protests… He thought this movement is important for farmers,” he said.

Shubham Mishra (26), one of the four who died in the clashes, was a local BJP leader in Shivpuri, the district headquarters of Lakhimpur Kheri. On Monday, a few relatives and neighbours gathered outside his house to offer their condolences. Among them was his uncle, Anoop Mishra. “A life is a life. We expect justice… We expect the government to provide us the same treatment, on a par with the farmers who died,” said Anoop. Asked if they had received any assurances from the administration or government, he replied: “No, we haven’t. Only the local MLA came and met us… we have not been given any assurance on justice or compensation.”

Shubham, a businessman, is survived by his wife Rekha and one-year-old daughter Angel.

His father, Vijay, a farmer, said he had not seen who killed his son, and hence couldn’t level allegations against anyone. “I don’t think the farmers could do something like this. It must have been done by anti-social elements,” said Vijay, who has another son, Shantanu (24).

“How can someone do this to him. His head was completely crushed. He was identified by his clothes, as his face could not be recognised,” said Shubham’s friend Praveen Mishra.

Sunil Singh, the BJP’s district unit chief in Lakhimpur Kheri, confirmed to The Indian Express that Shubham was a party leader. “He was among the eight dead. Another party leader, Shyam Sunder (40), who was a mandal mantri for Singhai block, also died in the violence on Sunday… I have full faith in the inquiry. Justice will be done to both sides and the accused will face action,” he said.

He said Hari Om Mishra, the driver of Union MoS Ajay Mishra’s son, Ashish, was also among the dead. “Hari Om was 35 years old, and belonged to Phardhan area of the district,” he said.

The fourth person who died in the clashes has been identified as Raman Kashyap (30), a local journalist from Nighasan area of Lakhimpur Kheri district who worked as a stringer for Sadhna TV. “He was killed while he was shooting videos of the incident. He was beaten to death by the protesters,” said Brijmohan Singh of Sadhna TV.

‘Attack on America will be met with great force’: Donald Trump threatens Iran