As one walks into the Central Ridge, past kikar and the polo grounds, resilient dhau trees, native to the region, stand tall. A few metres in, however, tracks left behind by excavators can be spotted. 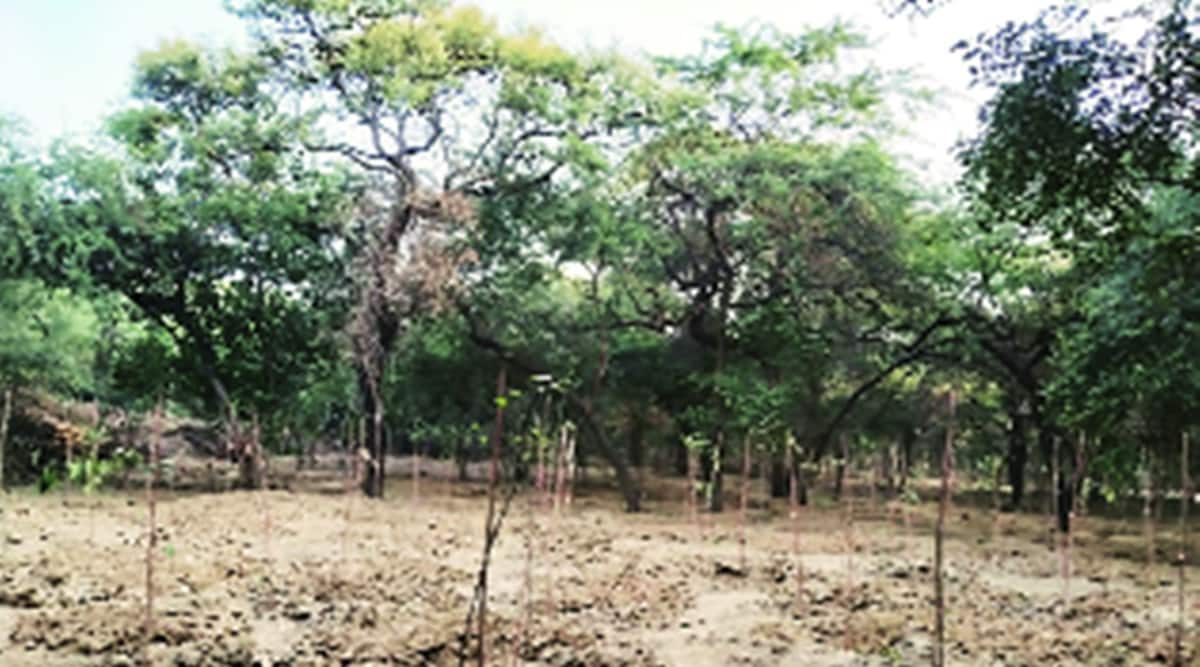 Court-ordered compensatory plantation in Central Ridge has come under cloud with environmentalist Pradip Krishen raising objection to non-native trees being planted in the eco-sensitive area, which has been taken over by the invasive vilayati kikar.

The environmentalist, who has worked on native and non-native trees in different parts of the country said jamun, gular, sirus, kasod and maulshree trees being planted in the Ridge are water guzzlers and non-adaptive to the ridge ecosystem. He also raised concerns on the use of excavators to help plant the saplings and has written to the Delhi Environment Department. Trees like jamun and gular are found along perennial streams, and kasod isn’t from the region.

As one walks into the Central Ridge, past kikar and the polo grounds, resilient dhau trees, native to the region, stand tall. A few metres in, however, tracks left behind by excavators can be spotted.

In a written clarification to Krishen’s reservations, the department has defended its decision. “The scheme of the plantation has been such that Ridge species can adapt to the Ridge environment easily and accelerate ecological restoration… for creating a wonderful and completely sustainable natural forest in this area,” it said.

The Indian Express also reached out to Principal Chief Conservator of Forests Ishwar Singh, who said, “The trees are being planted as per the HC’s order. The court had specified that the saplings should be more than six feet high and three-and-a-half years old. Accordingly, pits of appropriate depth were dug for tall saplings… manually, but at a few places where soil was hard and rocky, the excavator machine was used. Efforts were made not to damage any ground flora.”

Forest officials said the court had asked for 1.40 lakh trees to be planted in the area. The saplings are being brought by individuals on whom penalties have been imposed by the court. However, due to a lack of space, only 32,000 saplings have been planted in the last year-and-a-half; the court has been informed. It has ordered for plantation of a further 9,000 saplings, said officials.

Krishen, meanwhile, called it a result of “misguided planting”: “These mistakes have been made… since 1911, when the British thought Prosopis juliflora was the most useful, evergreen vegetation for the Ridge. Today, more than 90% is only kikar. It outperforms every other species and discourages anything from growing too close. In the process, ephemeral flora, the understorey of the forest floor and native planting is compromised. If planting has to be done, there are numerous degraded sites across the city. It can be done there…”

Delhi’s environment ministry in its clarification also said the plan for ecological restoration of the Central Ridge (for 423 hectares) is awaiting Cabinet’s nod.

With inputs from Shivam Patel

Police reach out to public to popularise Kavalan SOS app

Pallavi Purkayasta murder: Sajjad Mogul gets one year in jail for jumping furlough

Amritsar accident aftermath: Pune railways goes all out to clear encroachments from tracks