After months of internal wrangling, the Congress in Punjab formally sounded the poll bugle Monday with Chief Minister Charanjit Singh Channi holding his first public rally with Navjot Singh Sidhu and announcing that they will work together to create a “sunehra Punjab”. Channi also announced to fix at Rs 100 the monthly charges for a cable TV connection and added that the move is aimed at eliminating the “cartelisation of cable” as people are being unnecessarily harassed by the “cable mafia”.

The show of unity within the Congress began with Sidhu lauding Channi for his “pro-poor and landmark” decisions, and working round the clock for weaker sections. He said the Congress-led state government would soon evolve a mechanism to make Punjab a debt-free state by launching effective policies, adding “a debt-free Punjab would be a better place for future generations”.

“No one can defeat Congress if it doesn’t defeat itself. Workers of our party are our biggest strength. At least 5,000 posts of chairpersons of various market committees, boards and corporations were awarded in lieu of money,” Sidhu said.

He urged Channi and AICC in charge for Punjab Harish Chaudhary to give such posts to hardworking workers then “no one can defeat us” in upcoming polls. “It is our workers who form the government not us. Now, workers are standing by the party as Channi has raised issues of common people,” said Sidhu. While praising Channi for slashing power rates, Sidhu, however, said that even though the CM announced reduction in sand rates, it was still being sold for Rs 3,400 per trolley, “which needs to be stopped”.

“Reta free karan di gall zaroor kitti hai par reta ajj vi 3400 nu hi milda (Channi has reduced sand rates but it is still being sold for Rs 3400). Sand should not be allowed to be sold for more than Rs 1,000 per trolley…otherwise Sidhu won’t come again,” he said, adding, “this time honesty and morals will win in the polls… I will not let issues of Punjab get derailed”.

In an apparent response to Sidhu’s remarks, Channi said that he has ordered four-time reduction in prices of sand. “I was told no one can dare do it (reduce and fix sand prices) as police and influential people were involved in it. I called one meeting and we fixed sand rate. Hold me responsible if someone sells it beyond fixed rate,” Channi said. “Party and government are working together for Punjab,” he added.

Addressing the rally organised by senior Congress leader Kamaljit Singh Karwal in Atam Nagar constituency, the bastion of LIP MLA Simarjeet Bains, Channi announced fixing the monthly charge for Cable TV at Rs 100. Channi alleged that all such businesses of cable network and transport are owned by the Badal family.

“Now, people need not to pay more than Rs 100 per month and strict action will be taken against those not adhering to the new rates. If anyone harasses you, inform me,” said the CM.

He also announced that all illegal bus permits will be revoked and allotted to the unemployed youth.

Channi said in next 10 days, services of all sanitation workers in municipal councils and corporations will be regularised and there will be no condition of 10-year service, besides scrapping the contract system for recruitment.

He said historic decisions have already been taken for the welfare of poor, recounting the relief in electricity charges and slashing of sand and gravel rates.

“People are seeing new hope in Congress. Earlier no one listened to the poor, no one thought about them, their problems. This was the best Diwali for small shopkeepers and traders as no police or tax official dared to harass them. We had the best ever paddy procurement without any harassment to any farmer and no shortage of gunny bags,” he said.

Stating that “aam lokan da raaj Punjab vich sthapit ho reha hai,” the CM promised that posts in municipal and market committees “will be given only to deserving workers”.

Stressing his government’s commitment to ensure women empowerment, he said equal representation will be given to them in government and the party in coming days.

Lashing out at Shiromani Akali Dal and Aam Aadmi Party leaders for “misleading” the Punjabis, Channi said people are wise enough and could not be “fooled by false promises”.

Some families of youths who died due to alleged drug addiction protested outside the rally venue.

Nitin Patel says love jihad law soon, for the ‘safety of our women’

US bans cotton imports from Chinese firm on ‘slave labor’ 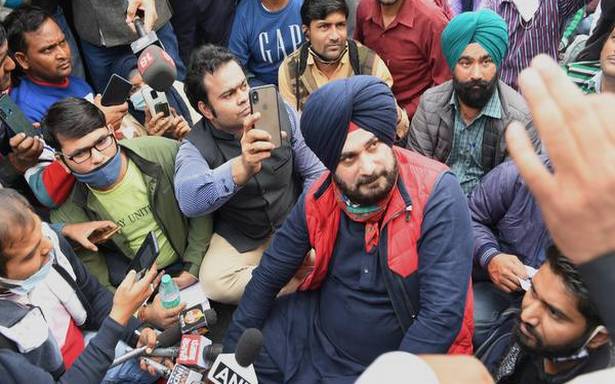