A proposal to double the 3.5 metre road was floated but the Centre asked if the width could be retained in order to avoid cutting down trees. 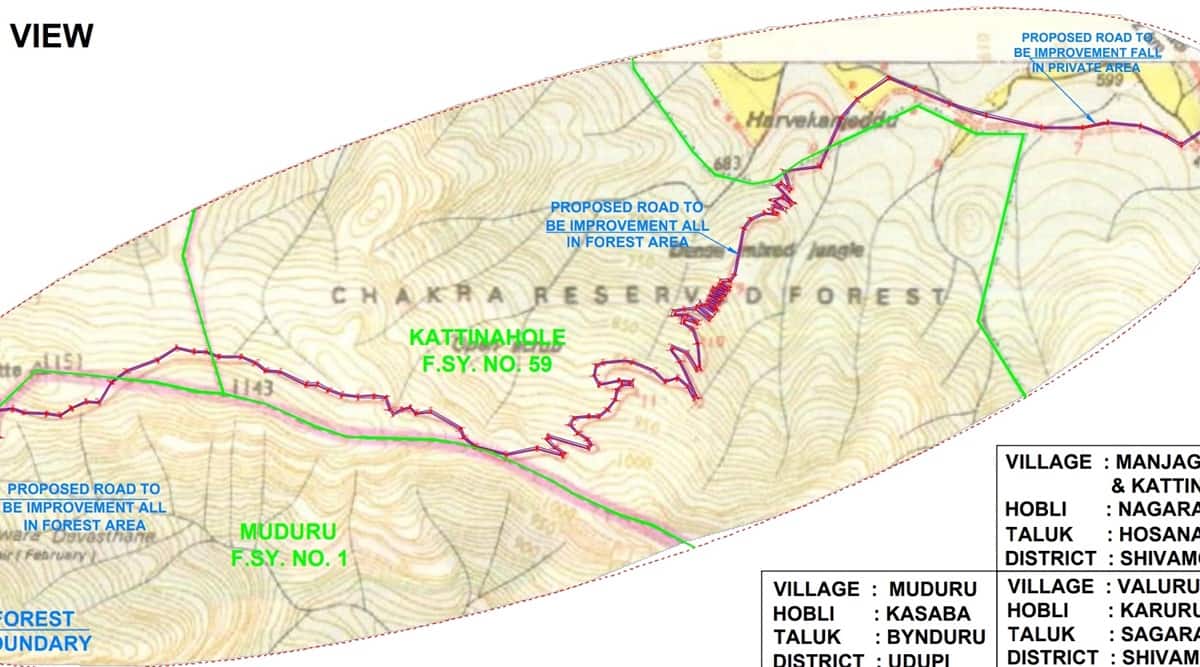 An RTI reply shows that the Union Ministry of Environment, Forest and Climate Change (MoEFCC) has asked the Karnataka government to find out if the improvement of the road leading to Kodachadri Hills can be retained to the existing width of 3.5 metre instead of the proposed 7 metre in order to avoid cutting down trees.

The proposal, floated by Karnataka Road Development Corporation Limited (KRDCL), was aimed at boosting tourism with the improvement of the mud road to a concrete road from Kattinahole to Kodachadri Hill top and Chakra Forest. The proposed road would cut through Mookambika Wildlife Sanctuary for which diversion of 5.5 hectare fresh forest land and 0.067 hectare non-forest land was sought.

In the RTI response to Ramprasad Aithal S, MoEFCC said in a meeting held on August 31, the Regional Empowered Committee (REC) deliberated on the issue and asked the state government to clarify if any carrying capacity study was done with respect to the number of vehicles and tourists visiting Kodachadri.

“Since the entire road either passes through Mookambika Wildlife Sanctuary or the area declared as Eco-Sensitive Zone, it is requested to clarify whether any carrying capacity study has been done in this area and whether any prescriptions/recommendations made in the current management plan of the Mookambika WLS with respect to regulating the number of vehicles and tourists visiting Kodachadri and to manage the tourism that is now in existence,” the REC asked the Karnataka government.

The state government has also been asked to provide details of landslides, if any, that have occurred along the road or in this area in the last 10 years. “The government should also look at the possibility of allowing only electric vehicles. Possibility of alternate mode of transport including, ropeway,” the REC suggested.

The proposal now stands with the Standing Committee of National Board of Wildlife (NBWL) and MoEFCC for clearance. The total cost of the project is Rs 9,74,00,000. The road project will pass through Kodachadri Reserve Forest, Chakra Forest and Madibare Reserve Forest.

The proposed concretisation of the road would jeopardise the lives of vulnerable species, including leopards and sloth bears, and endangered species like the lion tailed macaque.

Karnataka State Board for Wildlife in January recommended the Kodachadri Road project proposal to be sent to MoEFCC for approvals.

The land suitability certificate dated August 7, 2020, issued by Sagar Deputy Conservator of Forest shows the Karnataka forest department has accepted the diversion of the forest area to boost tourism.

Time to ‘know your HIV status’

Gurbax Rawat firm to contest for Mayor, says no one enters the ring without hope of winning

IPL 2020 | Credit where it is due, RR batted really well: Hardik

Priyanka Chopra and Deepika Padukone are the Angels to Nick Jonas’ Charlie at Met Gala after-party. Check out new pic