In March and April, some politicians had landed in trouble by distributing remdesivir at a time when its demand was high and availability low. 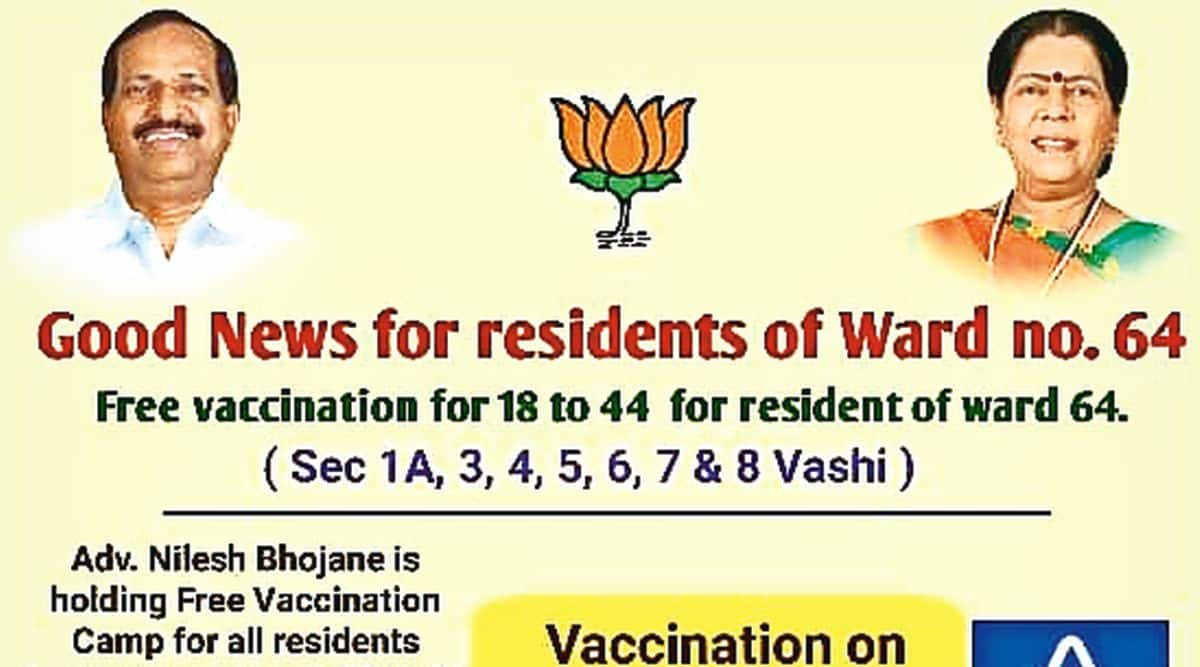 UNTIL A few weeks back it was remdesivir, the anti-viral drug used in Covid-19 treatment, now it is vaccination camps.

With an eye on municipal corporation elections next year, political leaders have started organising vaccination camps (both free and paid) for citizens by directly tying up with private hospitals, or facilitating tie-ups between hospitals and housing societies even as the government struggles with shortage of vaccines.

In March and April, some politicians had landed in trouble by distributing remdesivir at a time when its demand was high and availability low.

Ameet Satam, a Member of Legislative Assembly (MLA) from the BJP, started paid vaccination camps from May 29 in Walkeshwar, Bandra and Andheri. He has tied up with Apollo Hospital, which is charging each person Rs 1,000 for a dose, higher than the Rs 850 it charges on the hospital premises. So far, Satam has got 16,000 people immunised.

“In Andheri, we have a camp in Shree Ram Welfare School. I plan to organise camps in Borivali and Kandivali next,” Satam said. A spokesperson from Apollo Hospital confirmed the group has organised camps at three locations in Mumbai with Satam.

With Central government rules not providing a scope for political parties or leaders to tie up with private hospitals directly, these drives are being registered under an MoU between hospitals and housing societies.

In Thane, MLC Niranjan Davkhare is organising vaccination drive for 1,000 people in Hiranandani Park, Ghodbunder road, on Thursday in a tie-up with Apollo Hospital.

“The citizens have to pay for the vaccine. We are also trying to reduce rates by talking to the hospital and through CSR (corporate social responsibility) initiatives,” the BJP leader said, adding, “The government is not able to procure stock, so we are trying to help citizens.”

In Navi Mumbai, Bharatiya Janata Party (BJP) member Nilesh Bhojane has gone one step ahead and announced free vaccines exclusively for 18-44 year-olds at a camp at Marathi Sahita Mandir, Vashi, on Thursday.

A pamphlet and registration form he widely distributed has his photo along with that of senior BJP leader Ganesh Naik and the party logo.

Bhojane has tied up with Reliance Hospital, and will only provide vaccines to residents of ward 64, from where he is likely to fight the upcoming corporation election. “A lot of 18-44 year-olds are unable to book a slot on CoWIN. This is to help them,” Bhojane told The Indian Express.

N Ramaswamy, director, National Health Mission, said government guidelines are clear and allow vaccination in housing societies only to facilitate easy accessibility for the elderly and specially abled people. “Private camps are not allowed unless this requirement is fulfilled, especially not for just 18-44 age group,” he said.

Dr Satish Pawar, Directorate of Health Services, said municipal corporations have to take action if private drives are organised for people who are neither elderly nor specially abled.

Abhijeet Bangar, Navi Mumbai municipal commissioner, said the civic body will issue a notice to Reliance Hospital to ensure the drive is not confined to 18-44 year-olds.

“We give permission in housing societies knowing there are elderly people there…but we were not aware it is exclusively for 18-44 age group. We do not know who organised it. Registration is done under hospital’s name,” he said.

“I am facilitating camps through Fortis, Hindu Sabha and Sai Hospital. I am not paying for vaccines, just organising (camps),” he said. Residents have to pay between Rs 900-1,050 per dose.

BJP MLA Mihir Kotecha recently arranged a vaccination drive for over 250 people slated to travel abroad for studies.
In last week of May, BJP leader Ashish Shelar organised a three-day vaccination drive with Apollo Hospital, with each person who registered asked to pay Rs 1,000 per dose. The camp was organised at Bandra Hindu Association, Linking Road, for 1,000 people.

“We just organised everything. The immunisation was carried by Apollo Hospital and people who came paid,” said Shelar, who had widely shared a Google document for registration with his photo on a post.

In Juhu, BJP has put up banners of MP Poonam Mahajan, MLA Satam and corporator Anees Makwaaney stating BJP and BMC’s K-West Ward have together started vaccination centre in Rotary Club. Dr Ajit Pampatwar, medical officer in K-West, BMC, though, said, “BMC has not tied up with any political party. BMC is setting up a vaccination centre in each corporator’s ward. Ward number 71 is Makwaaney’s ward. We have not tied up with the BJP.”

BMC commissioner Iqbal Singh Chahal said, “We will issue show cause notice to the corporator. BMC cannot be pulled into such activities; we do not have a tie-up with any political party or politician for vaccination.”

In a letter to all states on May 29, Manohar Agnani, additional secretary in Union ministry of health and family welfare, had said that as per Covid guidelines only four options are available for carrying out vaccination— government centre, private vaccination centre, government office to be run by government hospital, private office to be run by private hospitals, along with “near to home” vaccination centre for elderly and differently abled person, to be organised at group housing societies, RWA offices, community centres, panchayat bhawans, schools/colleges and old age homes on temporary basis.

“Apart from this, in no other avenue can the vaccination be carried out under the National Covid Vaccination Program,” he had said.

China amassing troops along LAC since May, its conduct in disregard of all norms, says external affairs ministry