The deceased were identified as Fayaz (50) Manohar (29) and Aslam (45). According to police sources, Fayaz ran a crackers shop, Manohar was a goods vehicle driver and Aslam had a puncture repair shop near the godown. 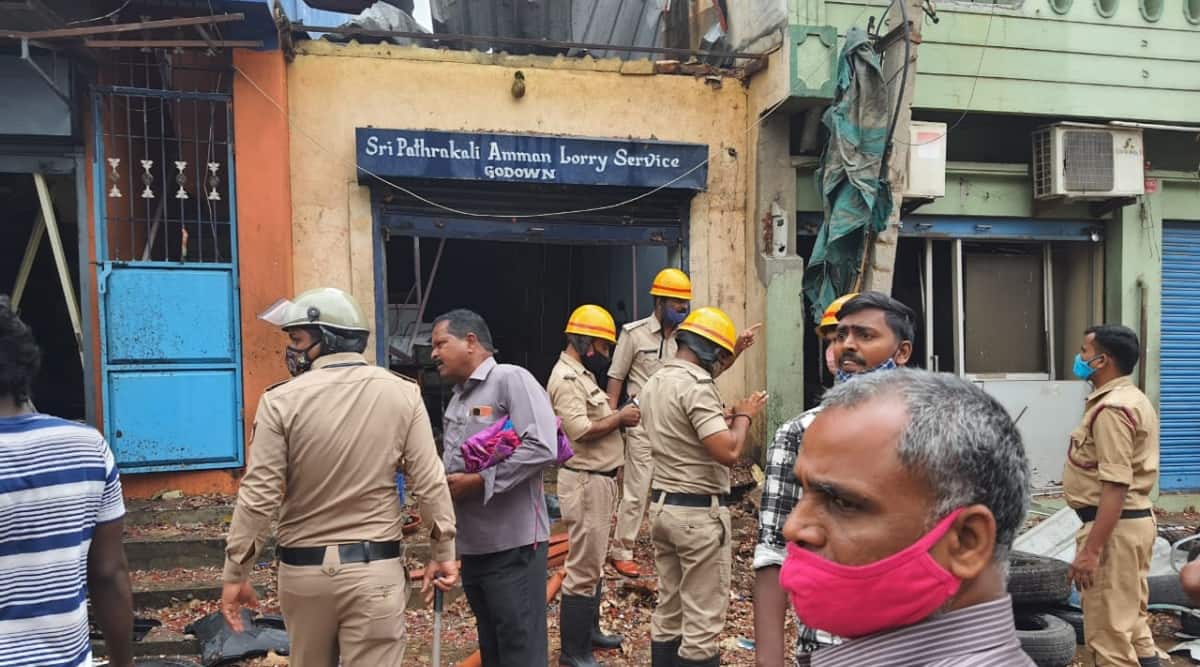 Three persons died on the spot while four others were injured in a blast at a transport company’s godown around 11.45 am in New Thagaratpet near Nagaratpet. According to preliminary investigation, the police said fire crackers were stored in the godown.

The deceased were identified as Fayaz (50) Manohar (29) and Aslam (45). According to police sources, Fayaz ran a crackers shop, Manohar was a goods vehicle driver and Aslam had a puncture repair shop near the godown.

The intensity of the blast was so high that Manohar and Fayaz’s bodies were found ripped in pieces and Aslam’s shop along with a nearby tea shop, were totally charred. Around 10 two-wheelers were also damaged in the incident.

While the crackers were stored without any safety measure, the fire officials are yet to ascertain the reason behind the blast. Deputy Commissioner of Police (south) Harish Pandey said, “There were more than 60 boxes of firecrackers but in the initial probe, it looks like only one box had blasted. However, we are yet to find the origin of the fire.”

It can be recalled that Tuesday evening, 82-year-old Lakshmi Devi and her daughter Bhagya Rekha (59) died in an apartment in Devarachikkanahalli after a fire broke out inside their apartment. Although police suspect a cylinder blast, a Forensic Science Laboratory (FSL) team visited the place Wednesday to collect samples.

The team is yet to conclude their report and are also probing short circuits that might have led to the fire. Rekha’s husband Bheem Sen (64), who was injured in the incident, is being treated at a hospital.

Following the incident, chief commissioner of Bruhat Bengaluru Mahanagara Palike (BBMP) Gaurav Gupta had issued a circular Wednesday, asking all residential complexes to mandatorily adhere to the safety measures and not make alterations to grilles without permission.

BBMP in a statement said, “The Commencement Certificate (CC) and Occupancy Certificate (OC), covering the balcony, modifying them or having additional structures is against the guidelines of Building Bye-laws 2003 and National Building Code of India 2016. It said that if there are any modifications at residential complexes it needs to take prior approval from the competent authorities.”