Speaking to The Indian Express, many said they are being paid less than the Minimum Support Price (MSP) for their crops, or, in the case of sugarcane farmers, haven’t been paid at all for a years. Among those arriving at the Ghazipur border to join the protest against the farm laws is a sizable group of small farmers, mostly from Uttar Pradesh and some from Uttarakhand. Speaking to The Indian Express, many said they are being paid less than the Minimum Support Price (MSP) for their crops, or, in the case of sugarcane farmers, haven’t been paid at all for a years.

Farmers from all backgrounds insisted that small farmers, who own two acres or less, will be hit hardest by the laws.

Ram Chand (43), from Pilibhit’s Dhakia Natha village, has been forced to sell his yield at a price much lower than the MSP for as long as he can remember. He said, “I have 5 bighas of land (a little less than an acre), in which I alternate between sowing gehu (wheat), dhan (paddy) and ganna (sugarcane).”

His foremost concern, however, was that he has not been paid for his sugarcane crop for two years. He and other farmers at the border said they are on contract with the Sahkari Ganna Vikas Samiti, which pays them Rs 325 for a quintal of sugarcane. The FRP (fair and remunerative price) for sugarcane is 285 per quintal. 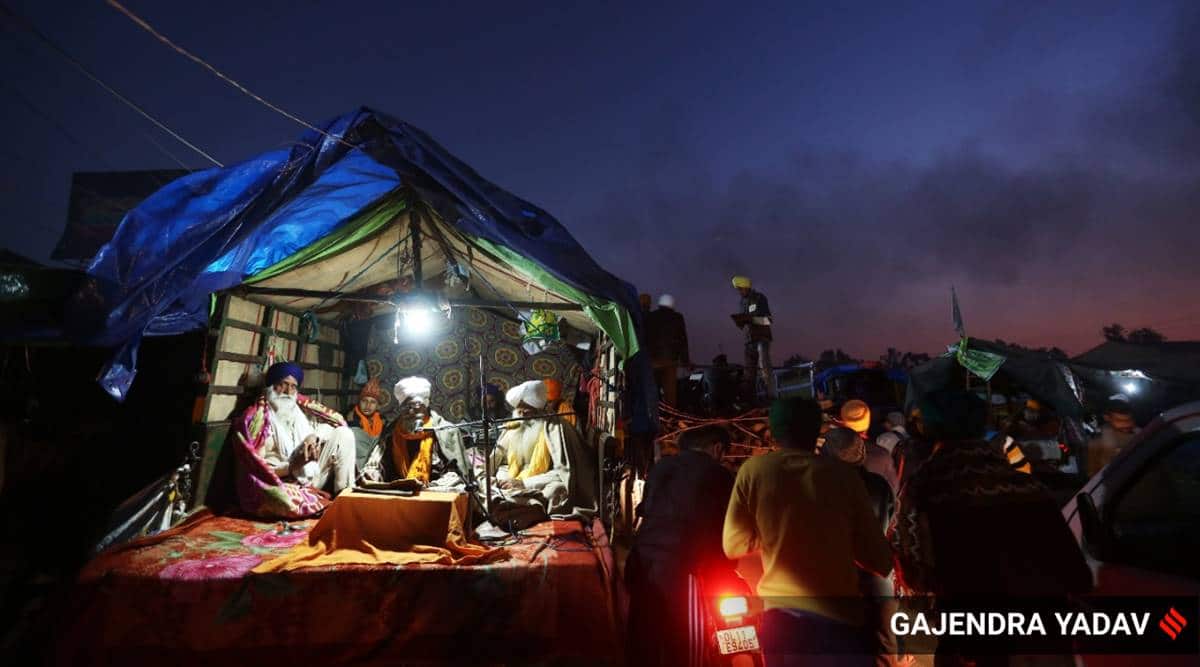 Chand, who has been at the border for 10 days, said, “I am still waiting for the pending amount. I had to take a loan of Rs 1.5 lakh last year for my son’s wedding and for farming. This is the condition when it (farming) is under the government. Imagine the situation if corporates come in and there is no MSP in place…”

Farmers argued that in such a situation, they cannot go to court under the new laws but have to approach the SDM.

Non-payment of sugarcane dues was a concern echoed by farmers from Uttarakhand as well. Mandeep Narwal (32), from Bazpur, said he has not been paid for sugarcane for two years: “Since it is the only crop that I grow, I manage to get 800 quintal of sugarcane in a year. But I have not received a rupee from it; I am managing the household by taking loans from local institutions.”

Asked if he can grow something else instead of sugarcane, he said, “What else can we grow? The situation is no better for farmers who grow dhan either.”

While the MSP for paddy is Rs 1,868 per quintal, not a single farmer at the protest site said they received over Rs 1,200.

Premanand Mahajan, an ex-MLA from Udham Singh Nagar in Uttarakhand, who reached the site on Monday, said, “I got Rs 1,200 for dhan this year, despite having some influence in my area. So you can imagine how it is for smaller farmers. This is why we want a written notice from the government regarding MSP, stating that it will be followed.”

Farmers said if MSP as well as middlemen are removed, they will be paid much less than what they are getting now. Puran Lal (38), from UP’s Pilibhit, explained how he is left with only Rs 500 by the end of the year: “Last season, I got 4 quintal of dhan, which amounted to around Rs 4,000. Of that, I spent Rs 2,000 to grow a batch of gehu. After paying labourers, I am left with Rs 500 for six months… if someone falls sick in the family, I can’t do anything about it. Four of my children study in a government school. They get a meal a day, but there is no teaching there.”

He said that if MSP was assured, he would have been left with Rs 2,000 in hand, which he would spend on sending his children to a private school: “I don’t want them to end up like me… but my eldest son, aged 12, helps with farming. That is the only way to cut down on labour costs.”