Responding to a tweet with a video of a woman, where she said she had recovered from Covid and thanked her doctors, Kejriwal said: “There is no need to be scared of corona. Many people are recovering and returning home daily.” 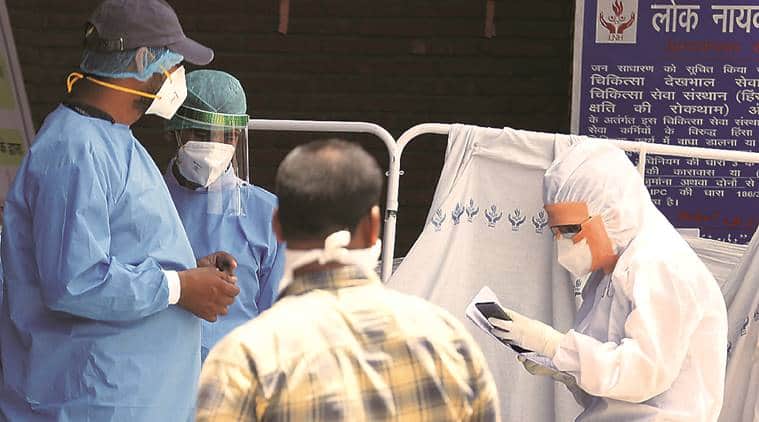 As Covid-19 cases in the city continue to rise, Delhi Chief Minister Arvind Kejriwal said there was no need to be afraid of the disease and that several people were being cured and returning home.

Responding to a tweet with a video of a woman, where she said she had recovered from Covid and thanked her doctors, Kejriwal said: “There is no need to be scared of corona. Many people are recovering and returning home daily.”

On Saturday, 591 fresh cases were seen, taking the total number to 12,910. While no fresh death was recorded on Saturday, 23 deaths that have taken place over the last few days, but were not added to the records, have taken the toll to 231.

The number of patients who have recovered and been discharged, meanwhile, is over 48%. While there are 6,412 active cases in the city, 6,267 have recovered.

Meanwhile, the tug-of-war between the administration and healthcare workers continued on Saturday, with several resident doctors from Maulana Azad Medical College posted in the Northwest district being asked to vacate the accommodation provided by the health department.

The order, passed by the Chief District Medical Officer, dated May 21 states, “According to the new advisory issued, only officers/officials who have high-risk exposure during duties in Covid area will be allowed quarantine for 14 days. Since no report of high exposure has been received from these officials, all are directed to vacate their accommodation immediately and report to the respective place of posting.”

The Resident Doctors’ Association of the institute has also written to the Chief District Medical Officer of the area to revoke the order and provide adequate duration of quarantine to the healthcare workers.

As suggested by the Ministry of Health and Family Welfare, the state government had issued an order saying that staff will go to quarantine only if they have had a “high-risk exposure” while dealing with Covid-19 patients or handling samples without PPE. “Regular quarantine of healthcare workers after performing duty in Covid-19 areas is not warranted except as elaborated under the protocol of high-risk and low-risk contact,” explained the order.

With not enough auspicious dates, wedding plans go for a toss in Chandigarh tricity

MCC told to share details of admissions under RTI Act

Not speaking truth to power has cost us dearly

Industries should make use of local people: Narayanasamy
Last News

‘Can give you six different answers: Former WWE superstar talks about his exit from the company