Yogi Adityanath said the airport will bring 1 lakh jobs, and that many other projects like Film City, Electronic Park are coming up in the region. 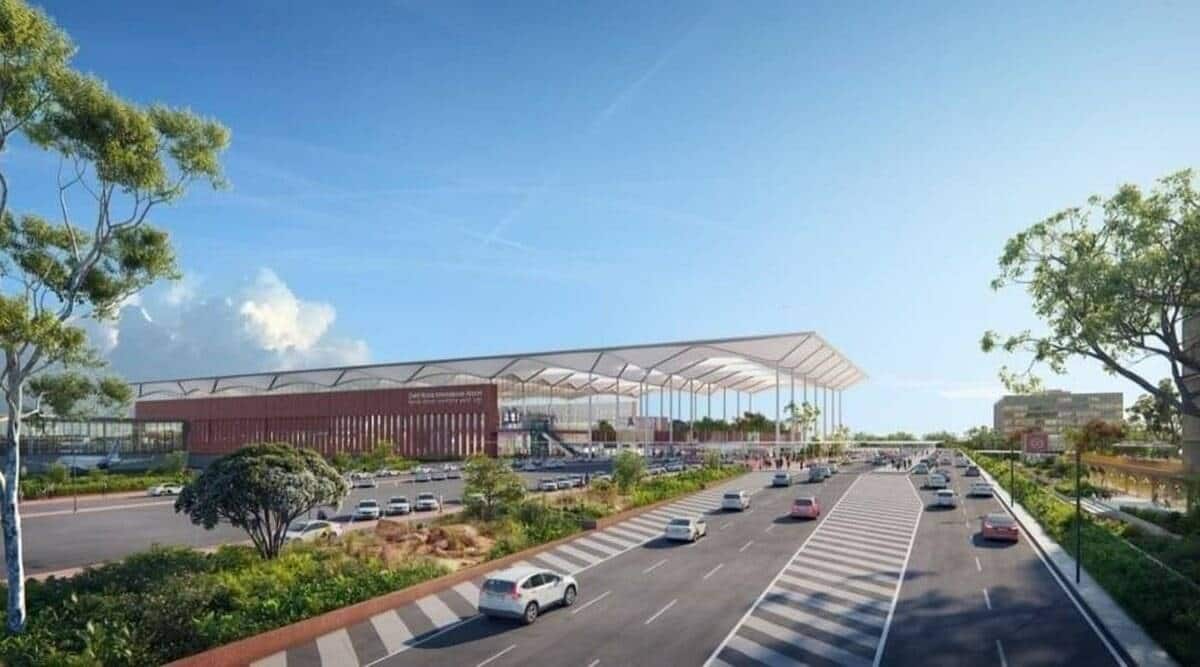 At the Jewar toll plaza exit, an LED screen atop a truck plays government advertisements about the upcoming airport. The highway stretches till Rohi village, where the foundation stone for the airport will be laid Thursday. Posters of party workers and leaders thanking the government can be seen every hundred feet. A muddy path cuts from the road, and huge tents and hundreds of labourers can be seen preparing for the ceremony.

On Tuesday, Chief Minister Yogi Adityanath came to the Jewar site to review preparations, ahead of Prime Minister Modi’s visit for the foundation stone laying ceremony of the airport. As per officials, a crowd of nearly 2 lakh is expected.

“For many years, there have been discussions on the possibility of an airport in this region. But due to lack of political will, it could not materialise. I am thankful for the vision of the Prime Minister because of which the airport is being built. The government focused on development activities and this will be a monumental project for the public in West UP,” said Adityanath at the inauguration site.

The CM said the state is working on airports in areas where people could not have “imagined” earlier. He said the airport will bring 1 lakh jobs, and that many other projects like Film City, Electronic Park are coming up in the region.

Taking a jibe at the opposition, the CM said, “This will be a memorable occasion. There are some akal se paidal log. These are the people who say that they wanted to carry out inaugurations. We need to tell them how the inauguration took place, and in such a timely manner projects were implemented.”

A stage of nearly 130 feet has been built, which has a 90×16 feet LED screen. Approximately 40,000 chairs are being laid out, but the total area, including the main tent, can include more than 2 lakh people, said officials. Two smaller tents have also been erected for official purposes.

“This is a dream come true for all of us. We need to ensure that the event is huge. The airport will soon be under construction and the promised employment will also come. People will begin arriving at the venue on Thursday from early morning since there is eagerness to welcome the PM,” said Jewar MLA Dhirendra Singh.

The Noida International Airport (NIA) will be India’s largest airport after its completion, said officials.

It is at a distance of about 72 km from the existing IGI airport in New Delhi, 40 km from Noida, and about 40 km from the multi-modal logistics hub at Dadri.

An agreement was signed in October last year with the concessionaire Yamuna International Airport Private Limited (YIAPL), an SPV of the bid winner Zurich International Airport AG. As per the agreement, the first phase of the project, costing Rs 5,730 crore as per the development plan, will have to be completed by September 29, 2024. Currently, the development plan given by the concessionaire is under examination and formalities will be completed in the coming weeks, officials said.

In stage 1, there will be a two runways airport of 1,334 hectares for which an agreement has been signed. In the following stage, the third runway in a 1,365-hectare area will come up for which land acquisition is under process. The 4th runway is on a 1,318-hectare area while a 5th runway has been proposed in the second stage.

National International Airport Limited (NIAL), a joint venture, was incorporated as a government organisation in which the UP government has a shareholding of 35%, Noida has 35%, Greater Noida has 12.5% while Yamuna Expressway Industrial Authority has 12.5%. The NIAL is proposed to receive Rs 400.97 per passenger, which will be the highest revenue by any airport in the country, officials said. The company will receive a cumulative revenue of Rs 1.6 lakh crore till the year 2060-61, officials said.

The airport will have multi-modal connectivity due to its proximity to the existing Yamuna Expressway (Greater Noida to Agra), close to Eastern Peripheral Expressway and it will be linked with Delhi-Mumbai Expressway at Ballabhgarh, Khurja-Jewar NH 91, dedicated freight corridor, Metro Extension from Noida to NIA and the proposed High-Speed Rail (Delhi-Varanasi) at the airport terminal. A 60-meter wide road parallel to the Expressway is proposed to be widened to 100 metres.

Maharashtra govt cracks down on illegal sale of catfish, seize 30 tonnes in 10 days