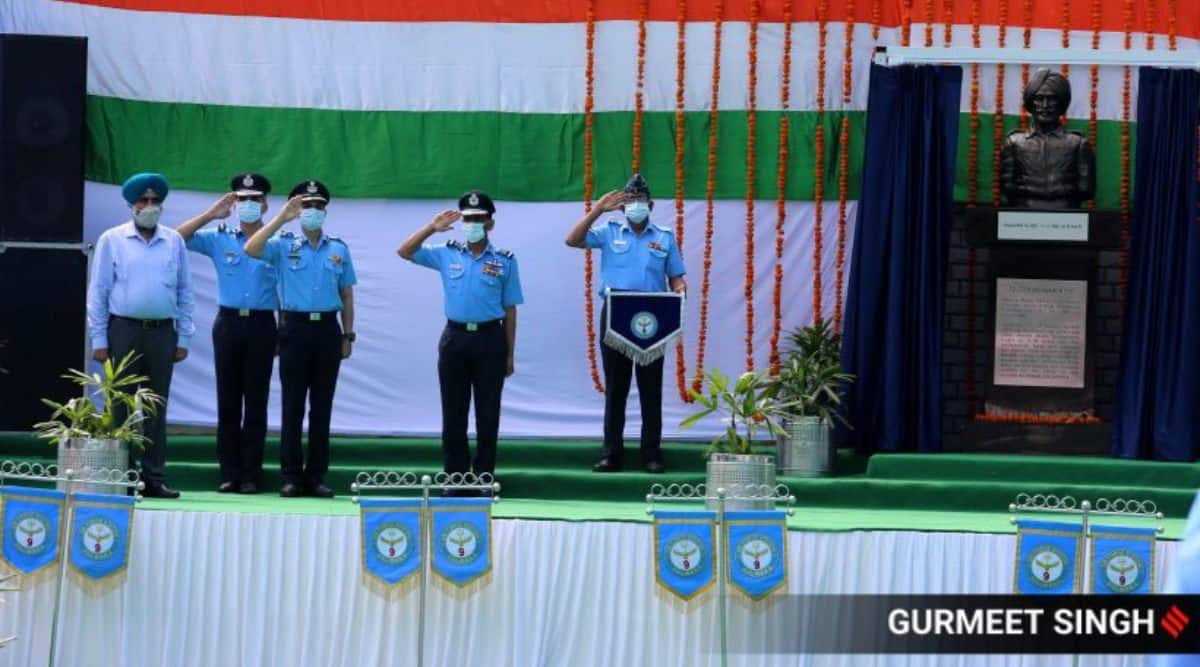 As the part of ongoing ‘Swarnim Vijay Varsh’ — commemorating 50 years of the 1971 war between India-Pakistan — the Indian Air Force (IAF) on Tuesday unveiled a bust of Param Vir Chakra winner, Flying Officer Nirmal Jeet Sekhon, of 18 Squadron, at his native village Issewal of Ludhiana.

Sekhon, who was awarded the Param Vir Chakra — India’s highest gallantry award — posthumously and is the only IAF officer to have received the award to date, displayed exemplary courage during the 1971 war and is known to have fearlessly taken on six Sabre jets of Pakistan when they attacked the Srinagar airbase. He had shot down two Sabre jets before his own Gnat jet was downed and he was martyred at the age of 26.

“Flying Officer Nirmal Jit Singh Sekhon was awarded the Param Vir Chakra posthumously for exemplary courage and determination in defeating the enemy during the 1971 Indo-Pak war,” a statement released by the IAF said later. “The event culminated with an aerial display by the Surya Kiran Aerobatic Team followed by the presentation of mementoes to some veterans of the 1971 war. Also, in attendance was the Indian Air Force Band, which enthralled the attendees with soulful tunes throughout the event,” the statement added.

On 14 December 1971, at Srinagar, he took off in his Gnat jet, even while the airfield was under intense attack by the Pakistani jets. He fearlessly fought six F-85 Sabre Jets, damaged two and causing two others to flee before being shot down. For his supreme gallantry, exceptional flying skills, sublime heroism, and supreme sacrifice for the nation, he was awarded the Param Vir Chakra, read the plaque beneath the bust unveiled Tuesday.

Speaking to The Indian Express, Amardeep Singh Sekhon, the Late officer’s nephew, said that the event was also attended by Jagjit Singh, the officer’s paternal uncle (younger brother of the officer’s Late father).

“Nirmal Jeet Singh Sekhon was a hero and our entire family is proud of him. He was my paternal uncle (father’s brother). His parents have died. His wife remarried after his death. The couple had no children. So I being his nephew, is in the possession of his Param Vir Chakra. He and my father were only two brothers. We were told that his remains were found amid his plane’s wreckage and the IAF had performed his last rites,” said Amardeep.

‘Flying Officer Nirmal Jit Singh Sekhon was a pilot of a Gnat detachment based at Srinagar for the air defence of the valley against Pakistani air attacks. From the very outbreak of hostilities he and his colleagues fought successive waves of intruding Pakistani aircraft with valor and determination, maintaining the high reputation of the Gnat aircrafts. On 14 December 1971, Srinagar airfield was attacked by a wave of enemy Sabre aircraft. Flying Officer Sekhon was on readiness duty at the time. In spite of the mortal danger of attempting to take off during the attack, Flying Officer Sekhon took off and immediately engaged a pair of the attacking Sabres. In the fight that ensued, he secured hits on one aircraft and damaged another. By this time the other Sabre aircraft came to the aid of their hard-pressed companions and Flying Officer Sekhon’s Gnat was again outnumbered, this time by four to one. Even though alone, Flying Officer Sekhon engaged the enemy in the unequal combat. In the fight that followed, at treetop height, he almost held his own but was eventually overcome by sheer numbers. His aircraft was shot down by gunfire of one of the Sabres and he was killed. The sublime heroism, supreme gallantry, flying skill and determination above and beyond the call of duty displayed by Flying Officer Sekhon in the face of certain death have set new heights in Air Force traditions,’ it says.

Gurjeet Singh, village sarpanch, said that though all villagers could not attend the event, the entire village was proud of Sekhon’s connection with their place “The best part is that the memorial has been setup in the village school and it will keep reminding the children of the great officer’s connect with our village for generations ahead,” he said.

Pune youth were in touch with city-based ISIS sympathiser