The city recorded 1,812 Covid-19 deaths in the month of April — the previous high was 971 deaths recorded in September 2020. As many as 1,479 of these deaths in April occurred in the last fortnight. 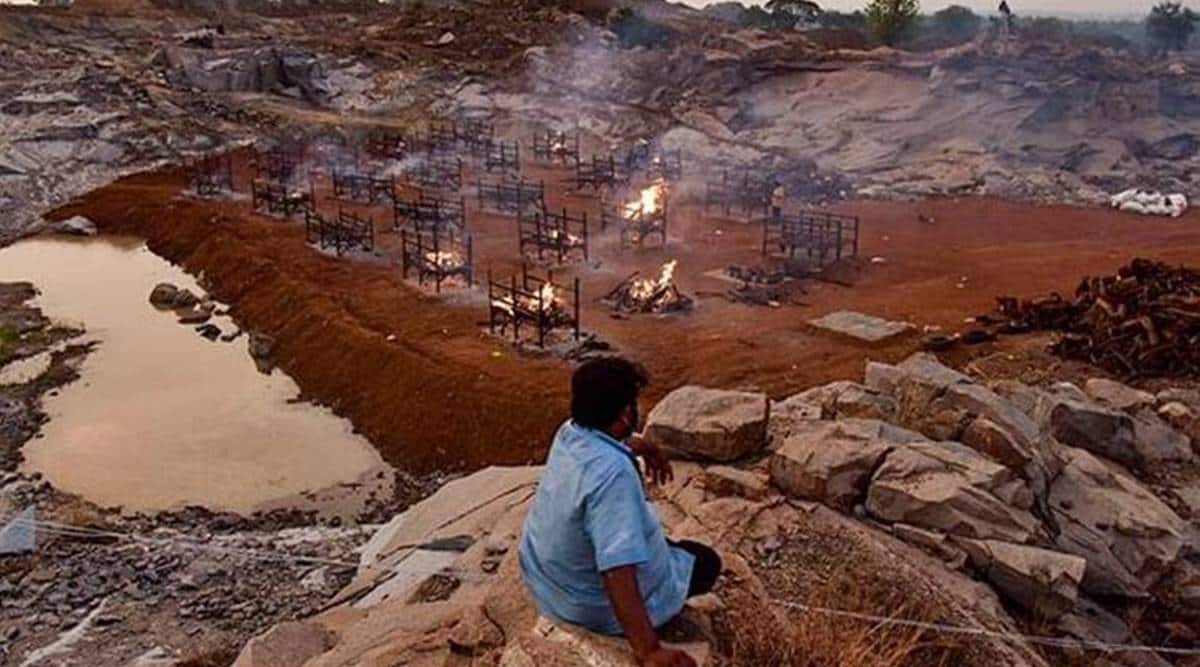 On Thursday, the body of Vijaya Kumar, 32, who had died of coronavirus infection, lay next to an elevator near the entrance to the emergency section of a large government Covid-19 treatment facility in Bengaluru. Brought in a couple of days before, Kumar was declared dead at 10 am. But the body, wrapped in a blanket, lay at the entrance to the Emergency until 5 pm.

It was not moved outside the hospital since the small six-cabinet mortuary facility where bodies are packed was full. Ravindra Reddy, a cousin of the deceased, tried to get hospital staff to get the body moved out but was told that nothing could be done until one of the bodies in the mortuary was taken out for the last rites.

With the second wave of Covid-19 lashing Bengaluru hard, crematoriums and burial grounds see tens of bodies of Covid-19 victims every day. Mortuaries in Bengaluru hospitals are full — especially the smaller mortuaries — despite the state government’s efforts to speed up the process of last rites by cutting red tape and opening up more crematoriums and burial grounds.

The city recorded 1,812 Covid-19 deaths in the month of April — the previous high was 971 deaths recorded in September 2020. As many as 1,479 of these deaths in April occurred in the last fortnight.

The combination of long a wait to complete cremation and burial and the full mortuaries has also resulted in the occasional body being brought back to mortuaries.

In order to ensure that mortuaries are cleared of bodies every day, officials at some of the large mortuaries at hospitals in Bengaluru have now asked the police not to store bodies of unidentified persons beyond a day — instead of three to seven days as was the case earlier. “We are instructing the police to get autopsies done in unknown death cases — such as railway accidents — within a day. Earlier they were given three days,” said Dr Venkata Raghava, professor and unit head at forensic medicine department of Victoria Hospital, which has a 48-cabinet mortuary facility, the largest in Bengaluru.

The mortuary had about 40 bodies earlier this week, and on average there are at least 25 bodies each day in the second wave, the official said.

At the mortuary of Bowring Hospital, another large facility, there were 10 bodies in the freezers as on Friday, and six more bodies were expected to arrive that night. “There is some delay in BBMP ambulances picking up bodies due to the long lines at crematoriums, but we are managing to clear bodies on almost a daily basis,” a mortuary worker said.

Dr P S Varghese, head of forensic medicine at St John’s Medical College and Hospital, however, said: “This time, there is no big backlog of bodies in the mortuary. Last time, BBMP had a lot of restrictions for handing over of bodies (which have been done away with). Last time they said we should hand over bodies to BBMP, which created inconvenience. It (the process) is getting cleared faster this time.”

The mortuary at the hospital can store 24 bodies and there are not more than 12 at a time due to the regular clearance, Dr Varghese said. He said bodies pile up because most hospital mortuaries have only two freezers.

Besides limitations of mortuaries, the increased number of deaths this time has put pressure on ambulances that take bodies for the last rites, said volunteers involved in helping families carry out last rites.

Tanveer Ahmed, a volunteer with Mercy Angels group, said: “There is a long wait at the electric crematoriums in Bengaluru, which have two furnaces and you can cremate only two bodies at a time. The whole process takes about an hour for two bodies. If 10 or 15 ambulances are in waiting, it is a five-hour wait for the family of the 11th deceased person.”

In Bengaluru, 15 electric crematoriums are now being used for Covid-19 deaths and two open ground wood crematoriums carry out 25 cremations at a time – this was created by the Karnataka government in the last few days to speed up the process. At one of the open crematoriums at Tavarekere (that became operational on April 28) over 50 cremations were conducted on Friday and Saturday, according to volunteers helping with the last rites in Covid 19 deaths.

Inter Milan vs Shakhtar Donetsk, UEFA Europa League Live Streaming: When and where to watch