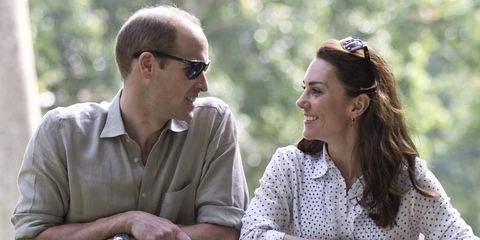 Meghan Markle and Prince Harry stepped out for Charlie van Straubenzee’s wedding this weekend, but Kate Middleton and Prince William were notably absent.

While Prince Harry was best man at the wedding, Prince William didn’t have an official role, so it was less crucial for him to attend the nuptials. And even though the Duke and Duchess of Cambridge were expected to put in an appearance at the ceremony, they didn’t make it to the event.

According to Hello! magazine, the reason that Kate and William missed the van Straubenzee wedding is likely because “the couple may have always planned to shun the spotlight and slip into the reception later this evening.” The publication cites their recent trip to Mustique as a possible reason for the no-show, noting that “Harry and Meghan were always sure to attend, with the Prince’s best man duties a poorly kept secret.”

The Duke and Duchess of Cambridge are delighted to announce that they have named their son Louis Arthur Charles. The baby will be known as His Royal Highness Prince Louis of Cambridge.

The Duke and Duchess of Cambridge are delighted to announce that they have named their son Louis Arthur Charles. The baby will be known as His Royal Highness Prince Louis of Cambridge.

One of the reasons William and Kate were expected to attend the wedding is because Charlie van Straubenzee’s brother, Tom, is one of Princess Charlotte’s godparents. It’s also believed that both Charlie and Tom were members of the wedding party in Prince Harry and Meghan Markle’s wedding on May 19. Clearly, the van Straubenzee’s are extremely close to several members of the royal family, but the Duke and Duchess of Cambridge managed to avoid being photographed this weekend.

Meghan and Harry attended the summer wedding in style, with the Duchess of Sussex wearing a multi-colored $328 Club Monaco dress, which she accessorized with a Philip Treacy hat.

Brad Pitt Regrets How He Handled His and Jennifer Aniston's Divorce