But it was the spices that conquered.

The New York Post reports that the Hollywood star celebrated his legal victory against Amber Heard with a $62,000 (a little over Rs 48 lakhs) Indian feast.

Depp and his buddies spent time at the Varanasi restaurant in Birmingham, England, where they had a lavish dinner on Sunday.

Among the delicacies that they ordered were Shish Kebab. If you like kebabs, here’s a lovely veggie version by blogger Preeti Alam.

You could also try making this melt-in-your-mouth Galauti Kebab by Chef Kaleem Querishi.

Or this Shami Kebab by India’s first Masterchef Pankaj Bhadouria.

There was Chicken Tikka and Paneer Tikka Masala on the Depp menu as well. Here’s a yummylicious Tiranga Paneer Tikka recipe from Chef Hari Ballabh Singh.

As for Chicken Malai Tikka, Reshma Aslam‘s recipe has you covered.

Or you could check out food blogger Swayampurna Mishra’s version.

If that’s what gets you, here are six chutneys that will make your mouth water.

And if you want to know which chutney is the healthiest, click right here.

While Johnny may have sampled pickled Okra Masala, we are sure he would have also loved Michelin Chef Vikas Khanna’s Crispy Okra Salad With Dried Mango Strips.

The Lamb Karahi they tucked into sounds delicious, but here’s a fingerlickingly good lamb recipe that has been passed down through generations in Punjab.

The mention of Tandoori Prawns — which the Depp party ordered as well — may make your mouth water, but so will these awesome Coconut Prawns and Malabar Spinach And Prawn Curry.

We didn’t see any mention of dessert, but any good Indian meal ends with one.

So may we, Mr Depp, suggest Palada Payasam, Malpua With Rabri and Paan Sandesh?

Nothing like Indian sweets to celebrate a birthday and Johnny turns 59 on Thursday, June 9. 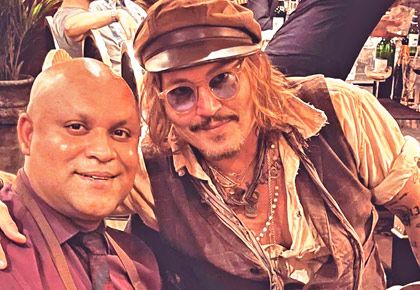 Gary Barlow reveals he had a breakdown following daughter’s stillbirth

How the vest was won

Turning Point: Shaw the hero until the anti-climax