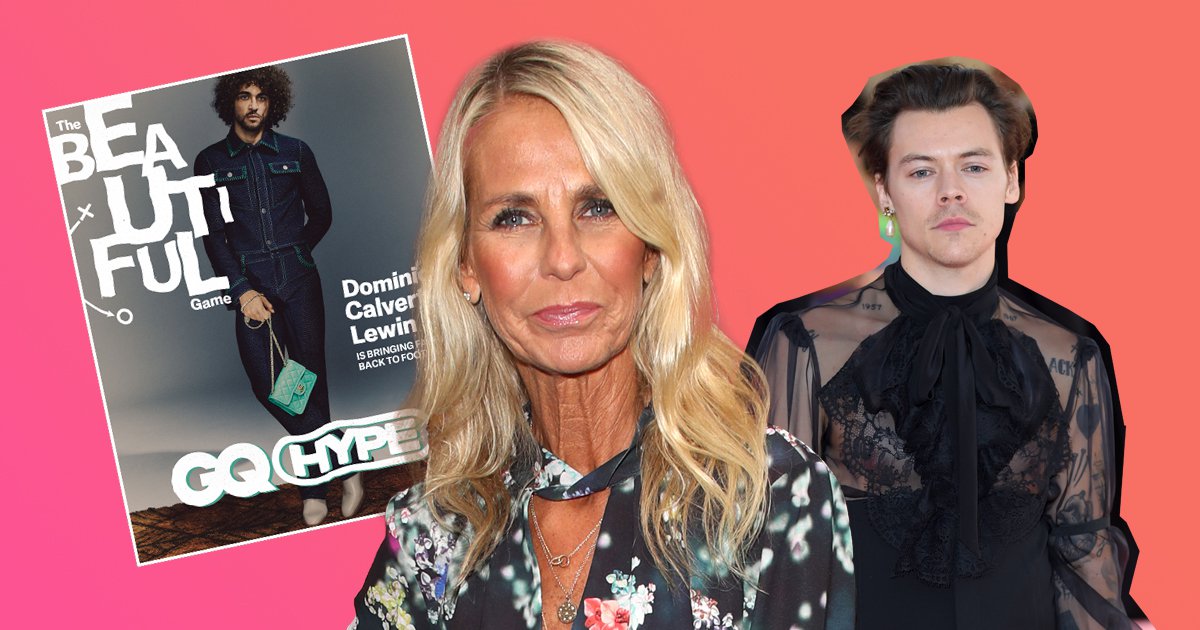 While we may love some lacy men, apparently not everyone is picking up what the chic lads in blouses – we’re looking at you Harry Styles – are putting down.

Actor Sean Penn recently had something to say about gender-fluid dressing and now Ulrika Jonsson has piped up to declare that while the likes of Harry and co are rocking more feminine fashion, she’d rather a ‘basic’ man.

Ulrika shared her two cents after Everton striker Dominic Calvert-Lewin owned the latest cover of GQ Hype in a jumpsuit and holding a Chanel handbag which, turns out, is not just designed for women.

Asking ‘where have all the men gone?’ Celebs Go Dating star Ulrika also mused on former One Direction singer Harry’s penchant for a ruffle or stacked boot, writing: ‘He had always been such a macho, naughty boy, draped in tattoos, and suddenly he is turning up in heels. I don’t quite understand the point.’

Also bringing up Jared Leto and Timothee Chalamet’s fluid wardrobes, the personality conceded it may ‘merely be a way of declaring and articulating their style’ but insisted she was rather perplexed.

Writing in for The Sun, Ulrika said: ‘I’ve got confusion running all down my baggy joggers — it’s neither one thing nor the other. I’m going to sound like a dinosaur when I say this doesn’t sit easy with me. At all.

‘Let’s be clear. It doesn’t repulse me in any way. It just gives out a strong message of ambiguity towards their sexual identity, suggests they are not strictly either female or masculine.’

While she goes on to add it would be ‘a boring world without drag queens’, she claimed men dressing in ‘feminine’ style is nothing more than ‘a little plaything just put in place to create attention’, feeling it didn’t sit on the same playing field as women dressing in a more ‘practical’ sense in trousers, which put them on a ‘more even footing’.

Wondering what donning a dress does for men, she wrote: ‘I love a masculine man. That’s just me. It doesn’t ever have to be at the expense of him being in touch with his feminine side. Why can’t men just be comfortable being “basic”, ordinary men? Why are they so fixated on being so overtly feminine? After all, that’s what they have us ridiculous women for.’

Ulrika may have gone on to insist this was just fashion ‘evolving’, but Sean Penn recently courted sensational ire when he claimed it was ‘cowardly’ for men to swap jeans for skirts.

Sean, 61, was quoted as saying: ‘I am in the club that believes that men in American culture have become wildly feminised… I don’t think that [in order] to be fair to women, we should become them.’

Asked to clarify his comments, he doubled down in an interview, stating: ‘I have these very strong women in my life who do not take masculinity as a sign of oppression toward them.

‘There are a lot of, I think, cowardly genes that lead to people surrendering their jeans and putting on a skirt.’

Harry – our king in a pearl necklace and frilled collar – previously shared his thoughts on gender-fluid dressing, after he caused quite the stir rocking a dress on the cover of Vogue US in 2020.

Wearing an array of outfits designed for all genders and no genders at the same time, Harry said once you take down any barriers you’re freeing yourself up to enjoy so much more.

He told the publication: ‘Clothes are there to have fun with and experiment with and play with.

‘What’s really exciting is that all of these lines are just kind of crumbling away. When you take away “There’s clothes for men and there’s clothes for women,” once you remove any barriers, obviously you open up the arena in which you can play.

‘I’ll go in shops sometimes, and I just find myself looking at the women’s clothes thinking they’re amazing. It’s like anything—anytime you’re putting barriers up in your own life, you’re just limiting yourself.

‘There’s so much joy to be had in playing with clothes. I’ve never really thought too much about what it means—it just becomes this extended part of creating something.’

It’s really as simple as that.

‘No infra project will be halted’

Kansas city finally finds a reason to fall in love