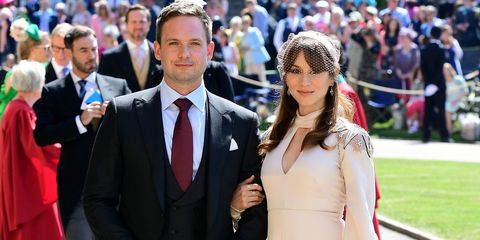 Troian Bellisario is reportedly pregnant with her and her husband Patrick J. Adams’ first child, according to Us Weekly and E! News.

The Pretty Little Liars alum and former Suits star (who shared the screen with Meghan Markle) have not yet publicly addressed the baby news. They’ve also kept a low-profile on social media lately, E! points out. However, pregnancy speculation began at the end of May when fans thought the actress was hiding a baby bump while on vacation in Mykonos, according to the outlet.

Adams told Entertainment Tonight last month whether he and Bellisario are planning on having kids. “We talk about it all the time, obviously, and when the time is right, the time will be right,” he said. “You know, we’re not going anywhere. Very much in love and excited for everything that comes next.”

Bellisario, 32, and Adams, 36, met in 2009, got engaged in 2014, and tied the knot in 2016, Us reports. Their California ceremony was bohemian and rustic-chic, per People, and celebrity guests included Lucy Hale, Ashley Benson, and Chris Pine.

The incoming parents were last publicly seen at a wedding—Prince Harry and Meghan Markle’s royal nuptials in May. Adams was accompanied by other Suits stars, including Sarah Rafferty, Gina Torres, Gabriel Macht, Rick Hoffman, and Abigail Spencer. The cast even grabbed dinner together the night before the ceremony.

Bellisario also documented part of the big day on her Instagram story.

Currently, the duo is working on promoting their joint film, Clara, a sci-fi indie thriller, which premieres at the Toronto Film Festival.

Congratulations to the happy couple!