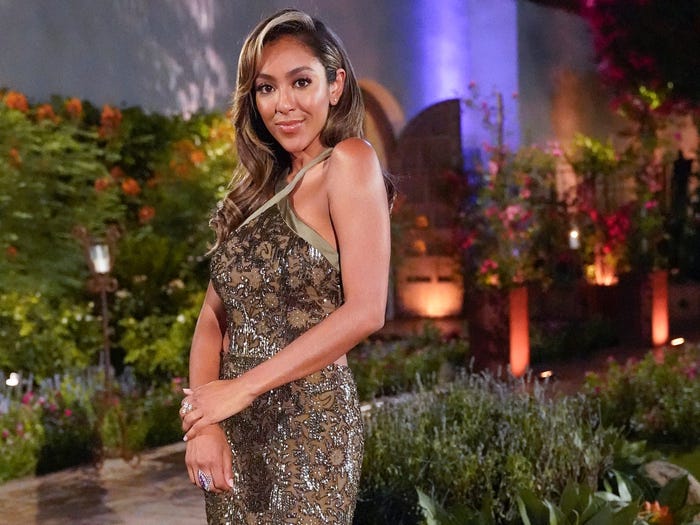 Here at Insider, we've kept track of what (almost) every Bachelorette star has worn on their first night of the show — and nearly every one of them sparkles.

Much has been said about the extremely long first night of the show, which regularly goes until sunrise the next morning. So, you might be wondering why it seems like the lead, year after year, is wearing a sparkly gown that doesn't look particularly comfortable.

"On a first night, the only reason why I will normally push a little more sparkle or have the bottom be not a fabric, or even just a netting, is because they stand in a wet driveway during a normal season," Cary Fetman, the show's longtime stylist told Insider.

The driveway is typically sprayed with water so it appears better on camera. As a result, the lead needs a dress "that absorbs" the water and dirt, Fetman said.

Over the course of the evening, he has to keep cleaning the dress, and sequins "dry a little easier." Netting can also work because he can wash it quickly, then "put it right back on her while she's warming up or going through all of the people she had just met, and looking at a photo again so she can remember their names."

"It gives me like 15 minutes to be able to dry it with blow dryers and clean it to make sure that she's not walking out dirty as soon as she's walking out to see the men," he said.

Fetman, who styles the lead but not the contestants, wants to make it clear: "I have never pushed sequins."

"I think what happens is they come into a room with one thing that they have in their mind — they don't want sparkles. They don't want to look like any of the other girls. And then they start trying these sequined gowns, on and I don't know why they all keep going to Randi [Rahm] but they just do."

As for some of Fetman's favorite night one looks? Both JoJo Fletcher and Rachel Lindsay's (sparkly) gowns come to mind.

"One of them had a first night gown that I was like, 'Oh my God. Okay. You can pat yourself on the back.' … Usually I am my most severe critic, but every once in a while, even I will look and go, 'Good job. That was good.'"