‘The attention economy is making it economically valuable for us to spread our attention thin’, observes ad guru Sandeep Goyal.
Illustration: Uttam Ghosh/Rediff.com 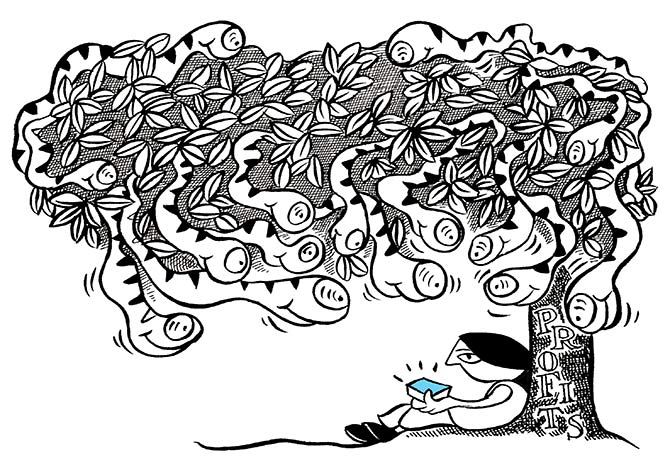 Back at business school, nearly 40 years ago, we were taught the AIDA Model — Attention, Interest, Desire, Action — as a linear continuum of consumer behaviour.

Much has changed in the past four decades. But the gateway to consumer interest, involvement and interaction still remains ‘attention’.

A simple request to ‘please pay attention’ implies two important characteristics of attention: That it is limited, and that it is valuable.

So, when we ‘pay’ attention to any one thing, we somewhat deplete our reservoir of mental resources, being left with less attention available to spend or use, elsewhere.

Human attention, therefore, is limited both in capacity and in availability.

The term ‘attention economy’ was coined in 1971 by a psychologist, economist, and Nobel Laureate Herbert A Simon, who posited that attention was the ‘bottleneck of human thought’, limiting both what we notice, and what we do with what we do notice.

So a wealth of information (even knowledge) actually ‘creates a poverty of attention’.

Attention is, therefore, an asset — in fact, the most valuable asset in the new economy.

Advertising, as a business, has always been about attention. The value of our collective attention, in fact, has helped fund all types of media — be it print, television, radio or outdoor.

Six to eight minutes of paid advertising funds the actual ‘content’ that fills every half-hour on television.

Every quarter page of advertising pays for the balance page of news or editorial content in the newspaper.

Without an active advertising subsidy, the Internet also as it currently exists would be completely unsustainable.

However, there is a fundamental problem with this ‘attention economy’.

While the number of advertising messages that can vie for the customer’s attention is practically limitless, the attention they are vying for is fundamentally limited.

And that has been advertising’s eternal challenge.

Every single day, there are more companies, with more brands and more products to advertise, which means there’s more demand for consumer attention than ever before.

When you take demand that greatly outweighs supply, and throws in the rapid transformation of consumer behaviour, you realistically have a recipe for waste.

The problem is, the supply of consumer attention simply hasn’t kept pace with this demand: There’s no evidence that individual human attention capacity has grown, or is growing.

On the other hand, there are many more distractions, and attractions, saturating the human mind with content and messages, most of which the overloaded consumer just ignores or misses.

Hence, the ever increasing premium on catching the consumer’s attention, holding it, and getting action out of that short window of opportunity afforded by the attention, is the difficult task that all advertising has to fulfill. But falls short of most times.

Attention, more than ever before, is being used as a differentiating factor in the consumption of information; a tool to prioritise what is deemed interesting, relevant or important.

The digital economy of ‘eyeballs and clicks’ is more worried today about the time spent by consumers — hence the quantity and quality of their attention — rather than the actual money spent by them on real transactions. Which by itself is really a strange metric and a somewhat unfathomable paradigm.

And it is for this that modern technology is changing us all. It is actually changing society.

The attention economy has commoditised our time and turned us into products to be bought and sold.

Social networks, in many ways, are the new business models of the attention economy.

They design algorithms that show us the most interesting and attention-grabbing information in our feeds.

So it seems like ‘everybody’ is getting married or having kids or having amazing trips around the world or doing something cool and fun and sexy.

That is only because we are exposed to these events in disproportionate numbers.

The attention economy also rewards people who are narcissistic and self-promotional because these people excel at getting, nay repeatedly grabbing, attention.

Therefore, it seems that everyone has become more shallow and self-absorbed, when in fact, our attention is being diverted and riveted onto a small set’s self-promotion.

Similarly in politics, the most extreme, radical, divergent and ignorant views get the most media miles because they are the most unique and they grab the most attention.

Gaffes, errant and irreverent interviews, and celebrities doing unusual antics and displaying deviant idiosyncrasies take on a much greater cultural significance than they actually are.

Because that is where our attention gets drawn to. And news channels alert us with ‘breaking news’ to instantly refocus our attention on ‘new’ news diverting it from whatever is occupying our mind at that moment.

The attention economy is making it economically valuable for us to spread our attention thin.

Distraction, or partial attention, rather than focus is the new virtue.

Erica Fernandes is all praise for Surbhi Chandna; calls her ‘enthusiastic and entertaining’ | BollywoodLife

Technology was on India’s side in Balakot operation: IAF chief

When dancing around a TREE was so much FUN!
We and our partners use cookies on this site to improve our service, perform analytics, personalize advertising, measure advertising performance, and remember website preferences.Ok