Lori Loughlin and Mossimo Giannulli are pleading guilty for their participation in the college admissions scandal, and Lori’s looking at two months of jail—not to mention a major fine and community service hours.

According to an Entertainment Tonight source, “Lori is doing OK” and “She’s hanging in there.” Another source says she’s “scared” and that “Just thinking about the reality of the situation is frightening for her. She is also terrified for her husband who will serve longer than she will.” 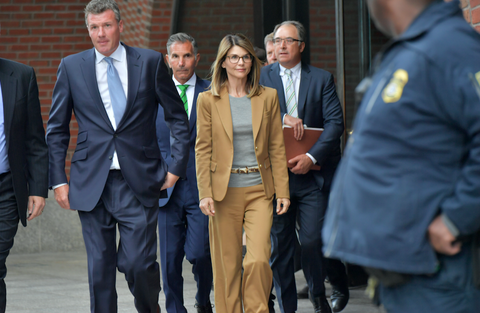 The source also says that “Pleading guilty was never part of the plan” and that Lori “sees herself as a good person, so coming to terms with the huge mistakes she’s made and the fact that she will do time, is crushing for her.”

As a reminder, Lori and Mossimo are accused of paying $500,000 in bribes to get their daughters into University of Southern California as recruits for the crew team. Per a press release from United States Attorney Andrew E. Lelling, “Under the plea agreements filed today, these defendants will serve prison terms reflecting their respective roles in a conspiracy to corrupt the college admissions process and which are consistent with prior sentences in this case. We will continue to pursue accountability for undermining the integrity of college admissions.”

OMG! Will we get to hear Katrina Kaif sing in Salman Khan starrer Bharat? – view pic

‘Not mine or yours, It’s our America,’ reminds Michelle Obama