In a statement released after the live telecast that included the awkward confrontation between the two actors, the Academy says it ‘does not condone violence of any form.’

AceShowbiz -The Academy has vaguely shown its stance following the awkward confrontation between Will Smith and Chris Rock at the 2022 Oscars. Taking to Twitter to address the “King Richard” star slapping the comedian onstage at the Sunday, March 27 ceremony, the organization said it “does not condone violence.”

In a statement released after the live telecast, the Academy briefly touched on the jaw-dropping moment as it said, “The Academy does not condone violence of any form.” It then swiftly changed the focus to the winners, adding, “Tonight we are delighted to celebrate our 94th Academy Awards winners, who deserve this moment of recognition from their peers and movie lovers around the world.” 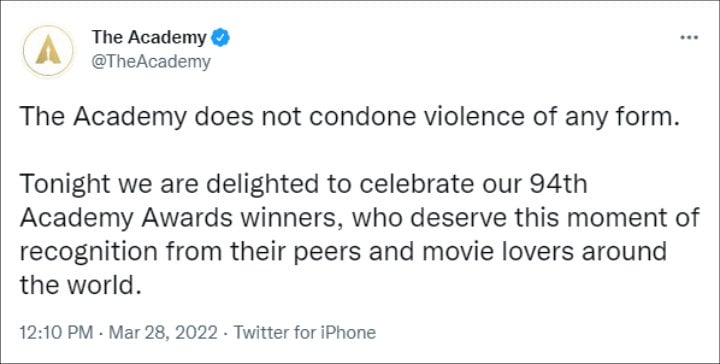 The Academy addressed Will Smith slapping Chris Rock at the 2022 Oscars live telecast.

The Oscars slap apparently already caught the attention of the Los Angeles Police Department, which has also released a statement. “LAPD investigative entities are aware of an incident between two individuals during the Academy Awards program,” the LAPD said in the statement given to HollywoodLife.

According to the statement, Chris has decided not to press charges against Will. “The incident involved one individual slapping another. The individual involved has declined to file a police report,” the statement continued to read, noting that “if the involved party desires a police report at a later date, LAPD will be available to complete an investigative report.”

The awkward moment happened when Chris presented the Best Documentary Feature award at the Oscars. He began making a few jokes about the audience, before nodding to Jada Pinkett Smith and saying, “Looking forward to ‘G.I. Jane 2’,” joking about her closely cropped hair.

Will, who sat next to his wife, then walked up to the stage and hit Rock across the face before returning to his seat. “Will Smith just smacked the s**t out of me,” the “Saturday Night Live” alum said, looking flabbergasted.

When he won Best Actor for his performance in “King Richard”, Will appeared to compare himself to Richard Williams, whom he portrays in the movie. “Richard Williams was a fierce defender of his family,” he tearfully said in his speech, seemingly justifying his act moments earlier. “I am overwhelmed by what God is calling on me to do and be in this world.”

He then apologized to the Academy and his fellow nominees before adding about the movie, “Art imitates life: I look like the crazy father, just like they said about Richard Williams. But love will make you do crazy things.”

After the moment went viral, fellow celebs took to Twitter to weigh in on the awkward confrontation. Will’s son Jaden Smith seemingly defended his father as tweeting, “And That’s How We Do It.”

Maria Shriver, on the other hand, appeared to disagree as saying, “We should never get to a place where we sit and watch a movie star hit someone on global television then, moments later, get a standing ovation while talking about love. #WillSmith #Oscars.”

Sophia Bush also disapproved of Will’s act, noting, “Violence isn’t ok. Assault is never the answer. Also? This is the 2nd time that Chris has made fun of Jada on the #Oscars stage, & tonight he went after her alopecia. Punching down at someone’s auto-immune disease is wrong. Doing so on purpose is cruel. They both need a breather.”