Once upon a time, in Kansas City, Missouri, a boy was offered a free haircut. It was the first in a chain of events that would end up with him becoming one of the most famous men in the world, as synonymous with fairy tales as Hans Christian Andersen.

For the complimentary barbering was offered in return for a selection of artworks by a 12-year-old who had a precocious talent for drawing cartoons. They were duly hung up all round the shop and soon became a neighbourhood attraction.

This early recognition of his artistic flair ignited the boy’s ambition and, by his early 20s, he was a fully-fledged animator, with his own production company called Laugh-O-Gram Films.

But it was the company he launched in Hollywood in 1923 under his own name that made him his fortune: Walt Disney. 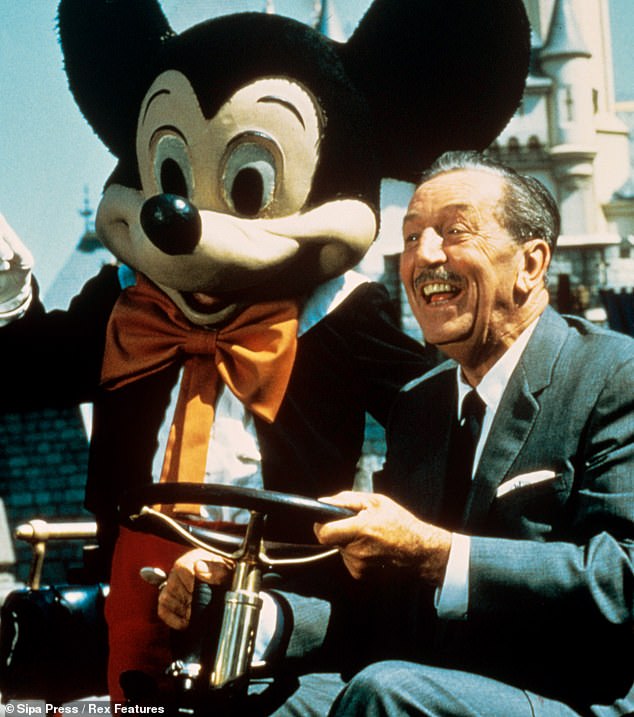 And the film studio that came to define family entertainment is marking its centenary this year with a series of celebrations dubbed ‘Disney 100’.

It will include an ‘immersive, multi-sensory experience’ called The Wonder Of Friendship — but those 100 years haven’t always been entirely wondrous, or even especially friendly.

There have been bitter labour disputes, allegations of racism and sexism, brutal boardroom battles and even a fatal 2016 alligator attack on a toddler at Disney World in Florida, as a result of which more than 200 of the reptiles were removed from the resort.

For one biographer at least, the man who started the original Mickey Mouse operation was ‘domineering’, ‘mean’ and sometimes ‘malicious’. 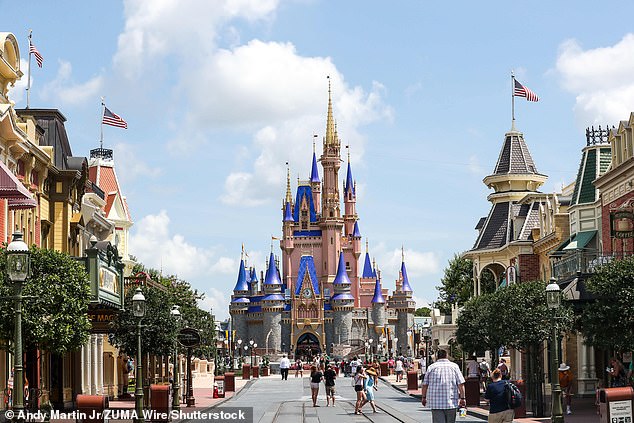 Castle: There was a fatal 2016 alligator attack on a toddler at Disney World in Florida, pictured, which led to more than 200 reptiles being removed from the resort

Yet he was also a unique visionary, who reshaped popular culture — not just in the U.S., but all around the world. As a studio publicist once put it, Walt Disney became ‘better known than Confucius in China, Shakespeare in England [and] the Blarney Stone in Ireland’.

But Disney’s commercial trajectory was by no means entirely smooth. His business brain didn’t match up to his pencil skills, and Laugh-O-Gram went bankrupt, despite his two seven-minute films inspired by the fairy tales Puss In Boots and Red Riding Hood getting national distribution.

Undaunted — and certain he could make it in the burgeoning movie industry — Disney set off for Los Angeles where his older brother Roy was working as a vacuum-cleaner salesman.

Disney’s biographer Neal Gabler wrote: ‘Walt was made for Hollywood. He loved dress-up and make-believe, was boisterous, outgoing, self-aggrandising and histrionic, and craved attention.’

In October 1923, with bags of self-confidence, and borrowed money, he and Roy founded Disney Brothers Cartoon Studio. The more commercially astute Roy ran the business side; Walt was the creative mastermind.

The other key figure in the story was Walt’s friend from Missouri, Ub Iwerks (whose father was a German immigrant). Iwerks was a better animator than Walt, but a mild-mannered man whom Walt teased endlessly, sometimes with real nastiness.

Worse, Walt never gave him the credit he deserved for his most famous creation: Mickey Mouse.

Mickey was born in 1928 after Walt, following a dispute with producer Charles Mintz, had lost the rights to his most successful cartoon character, Oswald the Lucky Rabbit, and urgently needed a replacement. 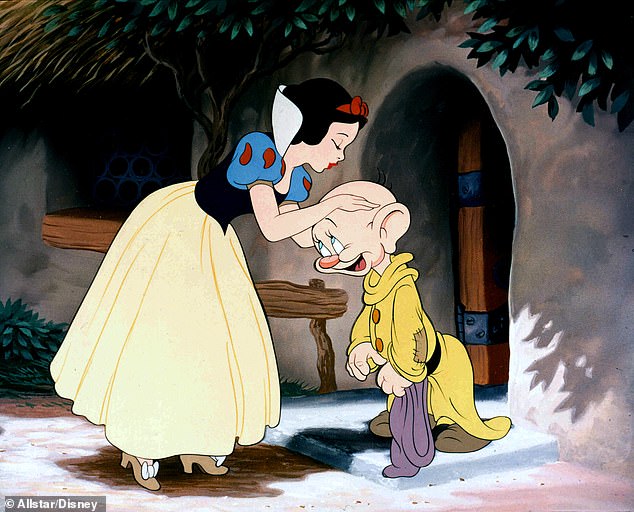 Movie: In 1935, with 500 people on the payroll, he was ready to make a feature-length film: Snow White And The Seven Dwarfs. Pictured: Snow White and Dopey, 1937

A legend eventually grew that Mickey (at first named Mortimer) was entirely his conception, inspired by a pet mouse he’d kept in Kansas City.

It was a great story, but it wasn’t true.

In fact, the iconic cartoon mouse emerged from a brainstorming session between Walt and his animators. Walt’s original drawing wasn’t much good, so Iwerks redesigned him, then animated Steamboat Willie (1928), the first cartoon film with fully synchronised sound.

It was a colossal hit. Walt himself provided Mickey’s squeaky voice, hogged pretty much all the credit and soon both man and mouse were household names the world over. There were still ups and downs. Walt felt deeply betrayed when the disgruntled Iwerks left the company. The extravagant cost of making animations was almost crippling, and when other studios produced Mickey lookalikes, Disney was forced to sue them to protect its first superstar.

But hit followed hit, and a host of wildly popular new characters included Pluto, Goofy and Donald Duck. Walt even opened a small private zoo at the studio, so his animators could study animal shape and movement.

In 1935, with 500 people on the payroll, he was ready to make a feature-length film: Snow White And The Seven Dwarfs. 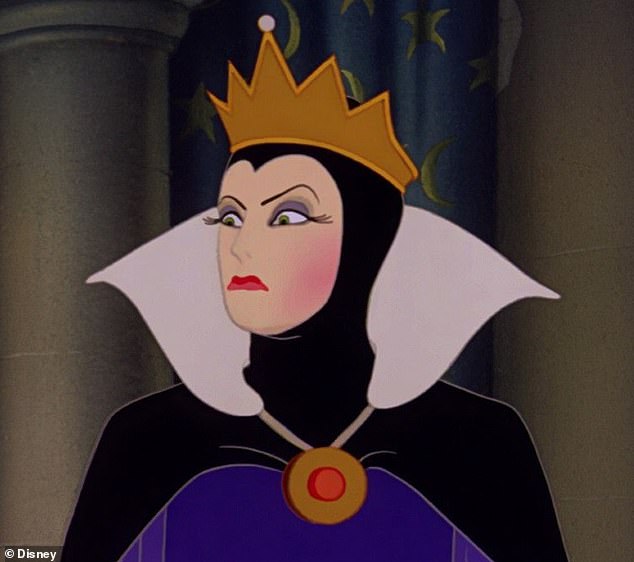 Success: Snow White, which came out in 1937, was a huge critical and commercial success, cementing Disney’s place in the cultural life of Britain as well as America

By now he was married to Lillian Bounds, who worked for his company as a secretary.

Their marriage lasted until he died, though it was never a happy one — not least because Walt didn’t have much time for sex.

He did have sleepless nights, though, over the characterisation of Dopey. He wanted Buster Keaton, Charlie Chaplin, Stan Laurel and Harpo Marx all to be reflected in the dwarf, and it distressed him night and day when he thought the animators hadn’t got it right.

His single-mindedness paid off. The film, which came out in 1937, was a huge critical and commercial success, cementing Disney’s place in the cultural life of Britain as well as America. In London, Snow White ran for 28 weeks non-stop.

When it reached the provinces, cinemas were forced to take bookings three weeks in advance.

Despite this bonanza, trouble was brewing in California as Walt was a relentlessly demanding boss, and when he did show his generous side, his staff took advantage. 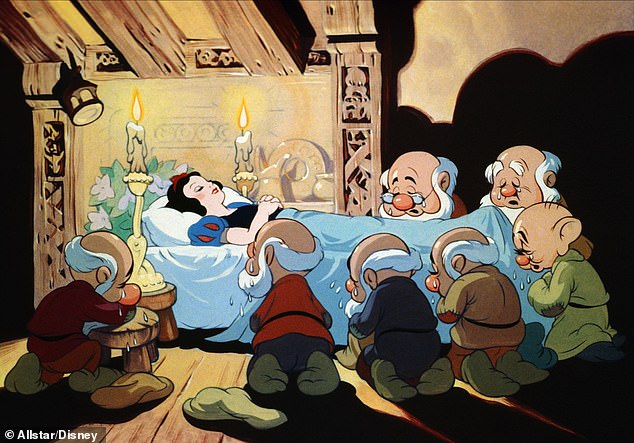 Worried: Walt had sleepless nights over the characterisation of Dopey in Snow White

Animator/director Bill Justice once recalled: ‘Swimsuits flew out the windows. There were naked swim parties, people got drunk and were often surprised what room they were in and who they were sleeping next to when they awoke the next morning.’

Snow White the movie was a tough act to follow — but follow it they did, with Pinocchio (1940), Fantasia (1940), Dumbo (1941) and Bambi (1942). The company, now restyled Walt Disney Productions, had more than doubled in size, but still Walt cracked the whip while keeping a beady eye on salaries.

When Pinto Colvig, the voice of Goofy, Pluto and two of the dwarfs, complained of being underpaid, Walt sacked him.

Growing unrest eventually erupted into a full-on animators’ strike, disrupting the production of Dumbo. The strikers demanded the right to join a union; Walt branded them communist agitators and got his revenge by having them caricatured in Dumbo as malevolent clowns in the film’s circus.

Further enraging him, the strike was led by one of his best animators, Art Babbitt (who had developed Goofy and drawn the Wicked Queen in Snow White).

Except for his drawing skills, Babbitt represented everything Walt loathed — not just an apparent ‘Commie’, but also quite clearly ‘oversexed’. He was a rampant womaniser, who had an affair with (and then married) Marjorie Belcher, the young dancer who had been the model for Snow White.

Eventually Walt was forced to compromise: he allowed his animators to unionise and agreed to change the wage structure. But he never forgave the strikers, accusing them of ‘breaking the spirit’ of the studio.

Perhaps they did, although it didn’t stop the Disney juggernaut gathering momentum in the next two decades, introducing live-action films (starting with Treasure Island in 1950) and, unlike most film studios, establishing a foothold in the new-fangled medium of TV.

Walt was not only the driving force behind all this, but he found the time and energy for another intensely personal project: the world’s first theme park, Disneyland, which opened in Anaheim, California, in 1955.

He also worked hard to cultivate the wholesome ‘Uncle Walt’ image, which was further enhanced long after his death by the 2013 film Saving Mr Banks, about the making of the 1964 Disney classic Mary Poppins. It was no surprise to find him played by Hollywood’s most avuncular star, Tom Hanks.

In recent times, though, Walt and the company he ran have often been branded both sexist and racist. By modern standards there was certainly some startling racism in his films (in Dumbo, the jive-talking lead crow was even called Jim Crow, after the set of laws that enforced racial segregation in the South).

And, for years, he refused to hire female animators, convinced they didn’t have enough flair.

Yet, for all his many flaws, Walt was undoubtedly a genius, arguably unmatched before or since in the realm of entertainment.

His death in 1966 from lung cancer (he smoked three packs of cigarettes a day all his adult life) hit the company hard. The loss of Disney’s guiding spirit seemed to sap it of creative energy.

What box-office hits there were in the years following his death, such as The Jungle Book (1967), still owed something to Walt. It was he who had suggested comic actor Phil Harris for the voice of Baloo the Bear in The Jungle Book, even acting out how the bear should come dancing into vision.

Eventually, in 1989, the worrying post-Walt slump was ended by the so-called ‘Disney Renaissance’, when the company re-embraced its venerable traditions of animation and fairy-tale storytelling to produce new classics such as The Little Mermaid (1989), Aladdin (1992) and The Lion King (1994).

And then, in 2019, the company created the at-home streaming service Disney+.

But so far, Disney+ has not attracted anywhere near the number of subscribers its CEO Bob Chapek promised, which is one of the reasons he was deposed in November last year. Bob Iger, who had served as chief executive for 15 years prior to Chapek’s appointment, was reinstated.

Another reason for Chapek’s downfall was the hapless way he tried to navigate between the ‘anti-woke’ legislation introduced by Florida governor Ron DeSantis, who wanted to make it illegal for primary school teachers to discuss gender orientation with their pupils — the ‘Don’t Say Gay’ bill — and the concerns of many of the 66,000 employees at Disney World, who screamed homophobia.

But by not making a stand, Chapek antagonised both sides and so duly lost the keys of the Magic Kingdom.

Disney and controversy are still bedfellows, no less than Mickey and Minnie Mouse.

There have also been plagiarism suits against the makers of The Lion King and Frozen, and in 2012 there was a marketing campaign widely regarded as the worst in cinematic history, which helped to turn the ill-starred and little-remembered sci-fi adventure John Carter into a $200 million-plus box-office mega-bomb.

But despite the disasters, Disney marches on in its centenary year, having bought and annexed other mighty institutions such as Marvel, its former rival Pixar, and Lucasfilm (which created the Star Wars and Indiana Jones franchises) to become an entertainment behemoth like no other.

There was never any truth in the widely believed tale that Walt Disney had himself cryogenically preserved after his death, merely hibernating like Sleeping Beauty until science could bring him back to life.

Like so much of Uncle Walt’s story, it was just a myth.

But it’s not like the truth isn’t astonishing enough: for 100 years now, it’s been a heck of a ride.

James McVey ‘has been sharing meals with ailing Harry Redknapp’

Ranveer Singh’s 83 to release in theatres on this date