With the spookiest night of the year just around the corner, people are turning to Snapchat to get into the ~spirit~ of the season with an easy disguise. In addition to old favorites like the Black Cat Lens, Snapchat’s new Halloween Lenses include a number of creations that’ll virtually transform you into everything from a one-eyed cyclops to a truly terrifying pumpkin-skull hybrid. Here’s everything to try out ahead of your Halloween countdown.

If you’re not seeing any Halloween options in your Lens Carousel, you’ll want to tap "explore" on the bottom right of the screen. From there, you can go to the search box and type in the name of any character or entity you’re looking to transform into, or browse some of the most popular lenses of the moment. Once you decide on a lens, you can tap the lens to try it out for yourself, send to others, or save to your favorites to make it appear in your Lens Carousel. If you want to search a particular creator or lens by name, you can also do that in the search bar.

To try any of these suggestions, you can tap on the link to unlock the Snapcode that’ll bring them up in your Snapchat app.

Snapchat’s Fire Skull Lens promises to turn you into a skeleton that looks like it’s on fire from within. You can expect to see your hair, your eye sockets, nose, and mouth to look like it’s burning. It’s one of the better AR filters Snapchat has done, and it’s safe to say it’s terrifying. 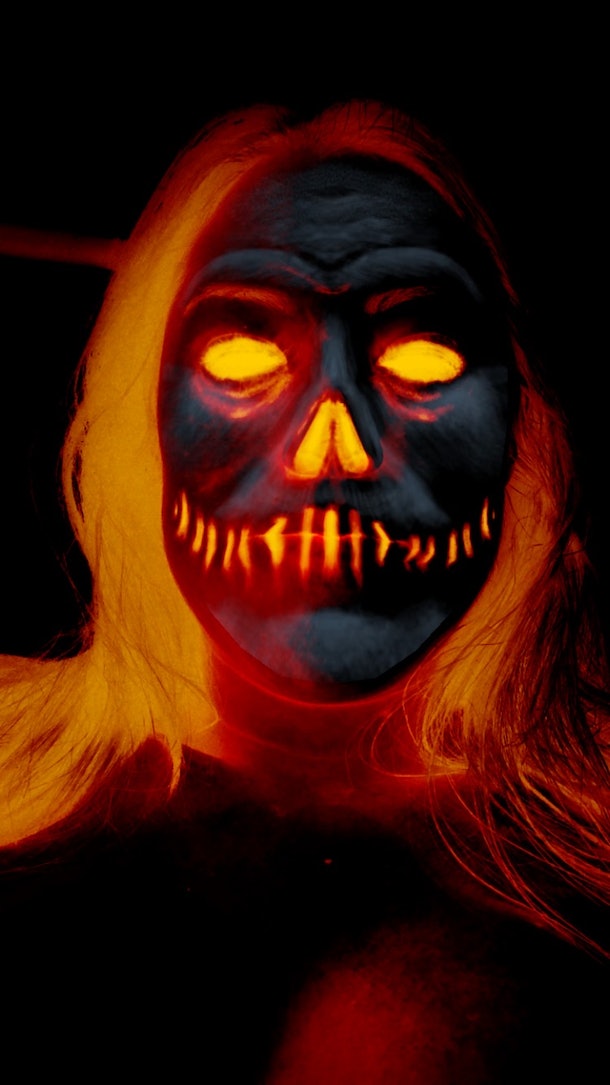 Want to look like there’s eerie wisps of smoke coming out of your eyes? Try Snapchat’s Smokey eyes lens for an effect that’s just as terrifying as it sounds. The moody black-and-white lens swaps out your eyes for billowing waves of white smoke, a result that’s simple but undeniably eerie.

Snapchat’s Horns Lens promises to transform you into a demonic horned with red pupils and black holes where your eyes should be. The faux red sparks and moody gray lighting in the background just add to the overall spooky effect.

If you’re looking for more of a funny transformation, Snapchat’s Cyclops filter will swap out your eyes for a giant purple one in the middle of your forehead and a snaggle-toothed grin.

Transform yourself into Pennywise with the 5 Clown 0 Freakies Lens from user @jp pirie. Unlike a regular clown, this terrifying effect features a cracked face, bloodshot eyes, bleeding from the mouth, and what can only be described as a disturbing expression.

Shying away from scary transformations? If you’re looking for a more basic disguise to get into the festivities, you can’t go wrong with Snapchat’s Black Cat Lens, which is available year-round on the carousel and gives you some seriously voluminous lashes, black cat ears, and a cat nose.

The Halloween Vampire Lens from Snapchat might make you look a little bit like a member of Kiss with a white face and black makeup around your eyes and mouth, but the fangs and the drizzle of blood give your undead identity away.

The "Button-4-Eyez" Lens from user jp_pirie, which is inspired by the animated movie Coraline, is simultaneously one of the creepiest and coolest options to try out. You’ll see your face transformed into an eerie doll with black buttons replacing your eyes, stitching around your mouth, and painted-on freckles. For double the spookiness, try it with a friend. 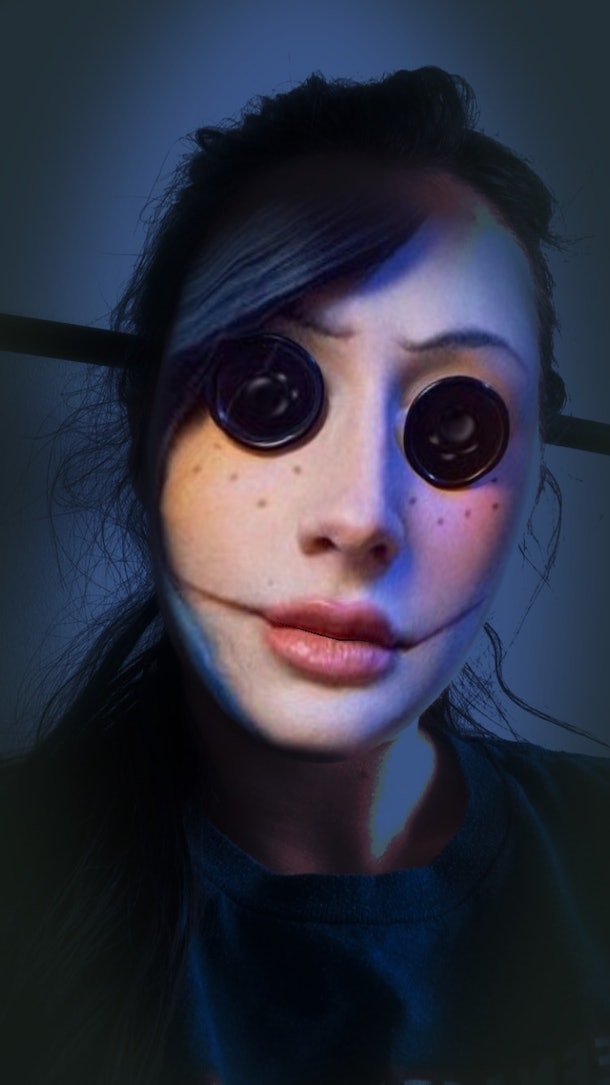 There’s just something about a pair of red eyes glowing in the dark that’s the stuff of horror movies. The Snapchat lens Vicious, by Snapchat user Tate McRae, expertly emulates that by leaving most of the user’s features in shadow and swapping out their pupils for two animated flames.

One of the more unconventional Halloween lenses available is the Fingers of Salad one from Snapchat user @jp pirie. It’s up to you whether you decide to talk about your love of rusty spoons, but you can expect your face to be transformed into the green-hued creature from David Firth’s animated series when you try this filter.

Transform your face into fall’s trademark squash, thanks to Snapchat’s Pumpkin Lens. Once you try it, you’ll see your entire face, except for your mouth and eyes, become an animated pumpkin. 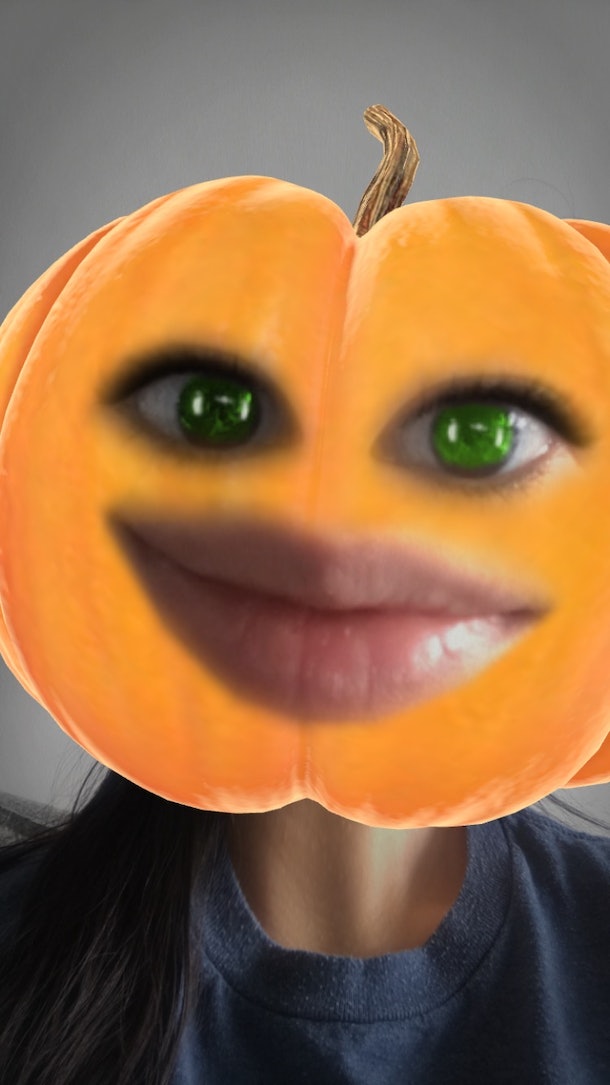 A more glam take on the Halloween Vampire Lens, the Coffin Frame filter makes it look like you’re waking up from your undead slumber. In addition to bright blue eyes, you can expect a berry lip, fangs, and a stream of blood to complete the transformation.

Snapchat’s Halloween Makeup Lens will give you a gothic but glam look, thanks to some on point brows and lashes accentuated with bright purple eyes, skeleton-inspired details, and a moody black-and-white background.

Snapchat’s Cool Dracula Lens offers a more comical version of the villain with over-the-top facial features. Your face and nose will become elongated, your eyes will turn an icy blue, and your eyebrows and hair will become jet black with this filter. A red cape is the icing on the cake.

These are just a few of the many funny and spooky offerings available in the app, so try them out and share any other good finds with your friends ahead of Oct. 31.