Take a pause and get ready to be amused this lazy Sunday… we’ve got you covered for your dose of laughter with some really hysterical clicks of our glamorous Bollywood celebrities. From Ranveer Singh’s fun antics to Alia Bhatt’s awkward snap at Kalank trailer launch and Malaika-Arjun caught unaware, here’s our pick of awkward clicks of the week. So, laugh your head off! 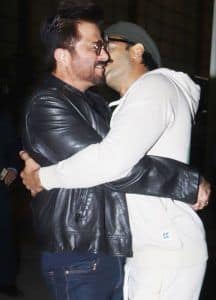 Trust Ranveer Singh to be the king of gags. When he bumped into his Dil Dhadakne Do co-star Anil Kapoor at the airport, the actor was only too glad to stop for a quick catching up. Ranveer caught Anil in an embrace and the veteran actor played along. However the bromance didn’t end here as Ranveer went one step ahead and planted a kiss on Anil Kapoor’s cheek. What the cameras captured was a rather awkward moment! Alia Bhatt, Varun Dhawan stepped out in their traditional best for the trailer launch of Kalank. And while we are still musing over the magnificent sets and glorious cinematography, Alia made a funny face at the promotions. The cast was throwing out (literally!) Kalank merchandise to fans and Alia was clicked in a chuckle-some pose. 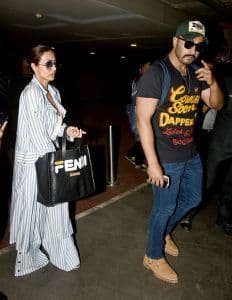 Arjun Kapoor and Malaika Arora are currently a hot favourite with the paparazzi. And while they refuse to publicly accept their relationship status, Arjun and Malla don’t mind getting clicked together. For instance, the couple was caught unaware at the airport, where the photogs went clicking as Arjun and Malaika returned from their Maldives sojourn. 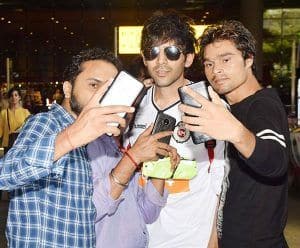 Kartik Aaryan is enjoying all the limelight that has come with his second Rs 100 crore hit, Luka Chuppi. And one step ahead of media shutterbugs are the selfie enthusiasts who flocked the actor at the airport, making the comical click a contender for our awkward pictures list. Kartik is sporting a clean-shave look for his yet-untitled romantic outing with Sara Ali Khan. The actor recently returned after wrapping up the first schedule of this Imtiaz Ali directorial in Delhi. And while our list of awkward clicks of the week could run longer, we’ll end the gag with this gawky snap of Saif Ali Khan. The actor attended the launch of a plush food-truck and while satiating his palate, Saif chose to pose with a chilli in hand with the conviction of a chef ready to plunge into the kitchen.

Did you laugh out loud? Let us know, tweet to us @bollywood_life!

DRAM And H.E.R. Team Up On New Track ‘The Lay Down’