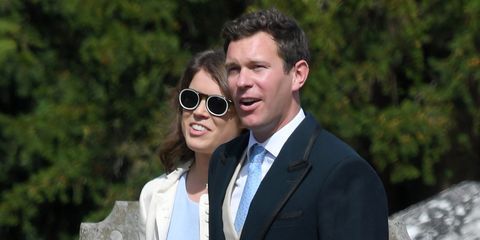 August 4 marks Meghan Markle’s birthday, and the Duchess of Sussex is spending the day at the wedding of one of Prince Harry’s closest friends, Charlie van Straubenzee. But the Duke and Duchess of Sussex aren’t the only members of the royal family in attendance.

Turning up at the wedding with her fiancé, Jack Brooksbank, Princess Eugenie looked effortlessly chic wearing a baby blue dress with a white jacket, which she accessorized with a striking pair of shades, and a floral clutch.

Her fiancé looked sharp in a suit, as he appeared to be a part of the wedding party, wearing the very same suit as Prince Harry. Brooksbank’s tie just so happened to match Princess Eugenie’s dress, hinting that the princess had coordinated her look with her future husband, with is beyond cute.

Jack and I are excited to be able to invite people to watch our wedding inside the Precinct of Windsor Castle. Find out more via publicevents.royal.uk/ballot ????

Jack and I are excited to be able to invite people to watch our wedding inside the Precinct of Windsor Castle. Find out more via publicevents.royal.uk/ballot ????

Meghan Markle was also in attendance at the wedding, and she just so happened to be celebrating her 37th birthday on the same day as the nuptials. Meanwhile, Prince Harry, served as best man for van Straubenzee. Having met at Ludgrove Prep School in Berkshire in the United Kingdom when they were younger, they’ve apparently been good friends ever since, according to Hello! magazine.

Meghan wore a stunning, multi-colored ensemble, which included a navy shirt, and a pleated skirt, along with a Philip Treacy fascinator and Aquazzura pumps.

Meanwhile, Prince Harry arrived looking dashing, almost going incognito in a sleek pair of shades. However, the prince was unmistakeable in the wedding crowd, as he strode into the church:

Kumkum Bhagya 16 January 2019 written update of full episode: Love is in the air for Abhi and Pragya