BBC Breakfast presenter Naga Munchetty, 45, was left in fits of giggles when her co-host Charlie Stayt, 58, put up a fight when it came to the UK’s most tropical temperatures. And while the clash was playing out to the nation live on BBC, fans watching at home also couldn’t contain their laughter.

I love the giggling over this. It makes me laugh even more!

Naga and Charlie have been praised for their on-screen banter, teasing and general humorous relationship and this particular morning was no different.

After she asked him a question, Naga was taken aback with his answer which led to a lot of confusion on both parts – and a lot of giggles, too.

“How many tropical nights do you think the UK has had after the last 40 years?” she asked Charlie. 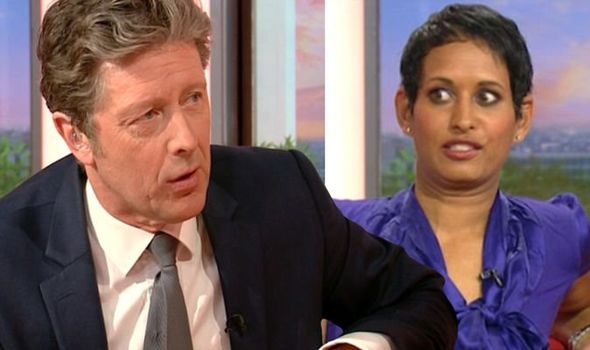 There was a brief pause as Naga hesitated, looking at the camera as she repeated herself slowly.

“The last 40 years,” she said again, confused at his first answer. 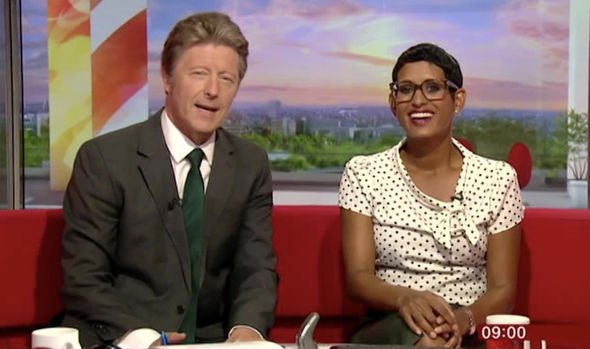 Naga could be seen looking around the studio in disbelief before she announced the figure was actually 128 extremely hot nights, meaning Charlie was only 125 off the mark.

After hearing just how wrong he was, he burst out laughing, saying: “I don’t know why you asked really.”

She replied: “Well, I thought if asked, because I thought then you’d understand how rare they are!”

“Well I thought it was even rarer,” he chuckled.

One fan filmed the exchange going down and couldn’t stop laughing while they taped it on their mobile phone.

Posting it to Twitter afterwards, they tagged Naga who took great pleasure in rewatching her co-host’s gaffe.

“I love the giggling over this,” she said, referring to the viewer’s laughter.

“It makes me laugh even more!”

More fans took to the comments section to agree, sharing their thoughts after rewatching the funny clip.

“This is hilarious – Charlie is such a legend!” one wrote.

A second agreed: “I wish Charlie would come on Twitter and get to enjoy the abuse we all get daily.”

A fourth added: “It did cheer me right up this morning. I love your reaction to Charlie’s answer!”

BBC Breakfast continues this morning at 6am on BBC One.

Ajit one of our finest skippers: Shastri